As darkness descended, the army prepared to eat what little was left of the last village they raided.  Cuchulag, still feeling smug from his last victory, the breyherd amusing themselves, the thunderscorn off, away from the others as normal.  Suddenly a chill came over the camp.  This wasn't just the normal chill of night coming on, but something much more sinister.  Cuchulag could feel the excitement building and sensed something else, another challenger.... 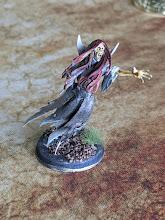 The glow in the distance alerted the army.  Kronak deployed most of the army in the center.  "Prepare and huddle together.  I've seen these before, and they will come from anywhere."  Cuchulag seeing his rival separated from the rest of her army, ignored Kronak's orders.  "You do not command me any longer!  Bestigors, with me!" 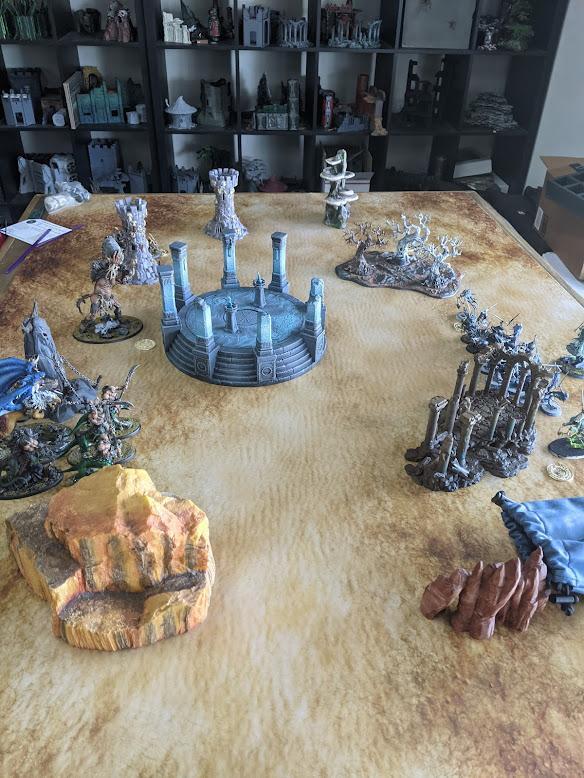 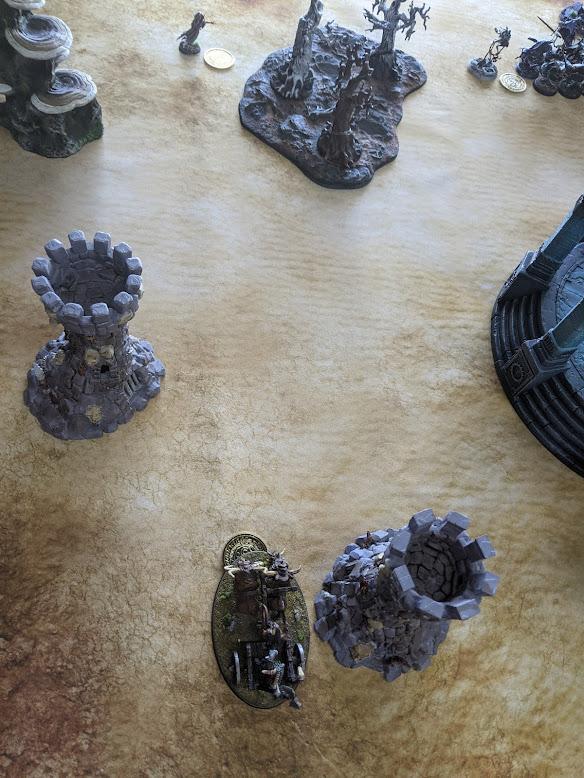 Kronak held the line while the ghosts in the distance moved up slowly. "We shall wait to see where they go and then strike with the speed of lightning!"  Suddenly, a large group of specters with chains clanking appeared on his right flank and with extreme speed were on top of him relentlessly fighting.  At the same time another group surrounded the Cygor with no warning.  This would be a fight for their lives! 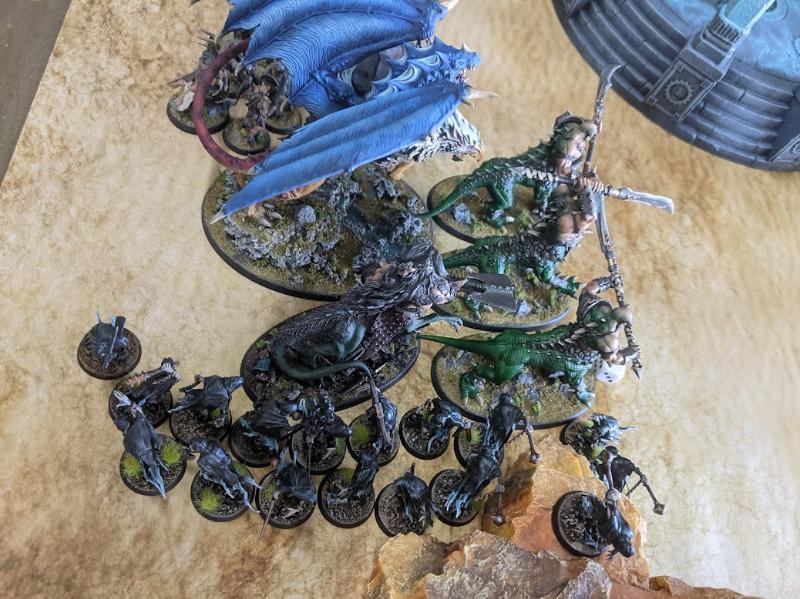 Severely hurt and dragon ogors down, Kronak was also looking down at a large number of large sword wielding ghosts coming from the front.  He attempted to slow them down with a storm but the winds of magic were not with him tonight.  Between the mighty Chimera, the Dragon Ogors, and the himself, they nearly destroyed the first onslaught but not without serious wounds.  The swordrasps then crashed into him and his dragon ogors immediately killing them all and nearly killing Kronak himself.

On the other flank, Cuchulag, cursing Kronak's poor planning that would keep him from his prey, for now, he crashed his mighty chariot into the swarm of chainrasps attacking the Cygor, for here there will be glory!  He slaughtered many of them, but they kept coming back.  The Cygor went down attempting to trample the ghosts and Cuchulag fought on.  Cuchulag felt the power of chaos come over him and the speed of his slaughter increased. 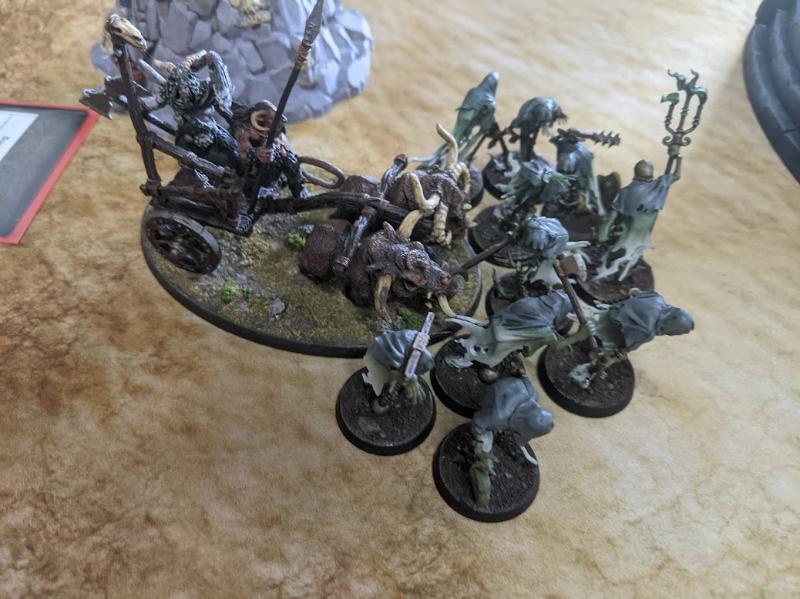 The bestigors meanwhile had found their way around and surprised the lone, pitiful ghost caster.  "Cuchulag said to be careful, but look at her", yelled Fellhorn.  She turned and charged the group, holding merely a small, glowing dagger.  The Bestigors fell on her for the slaughter!  To their surprise, she deflected or let pass through all of their attacks, then with startling speed, her dagger extending to massive length, slaughtered nearly all of them.  They ran, yelling for help.  Help came in the form of a cockatrice, called in from the wild, but too late to save them. 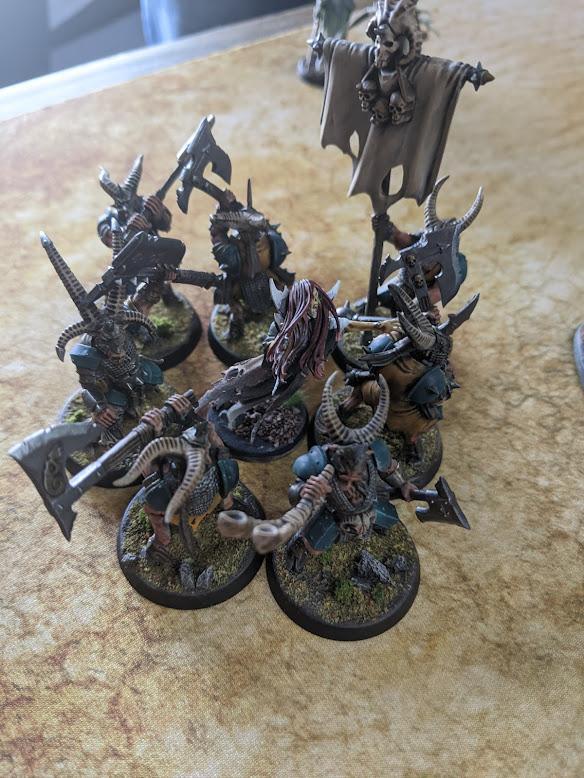 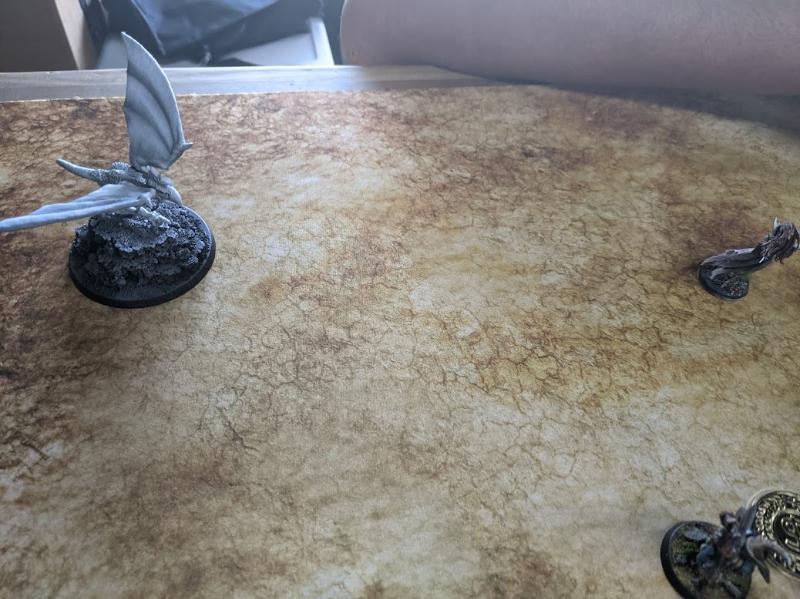 The battle ground down to a stand-still.  Cuchulag and Kronak both fighting viciously but making little progress.  The cockatrice finally made it and with petrification and slashing claws eliminated the spectral hero but too late to matter.  Cuchulag finally finished off the ghosts and withdrew to a corner of the battlefield where his shaman had called in reinforcements.  He cursed that monster had deprived him of his prey and that those ghosts had held him up so long.  As dawn came, the ghosts that remains disappeared back to wheree ever the had come from, clear in the knowledge of their victory.

This was a very weird battle for Beasts of Chaos.  I figured, give him the first turn, figure out where the reserves come in, and deal with it.  Generally, I like to go second and had the choice.  My opponent got crazy good rolls for his two units of chainrasps with charges of 11 and 10 giving them extra attacks and then had great attack rolls.  The Shaggoth actually was down to 2 wounds left after the first round and that was with the Command Trait to give him a 3+ save.  I basically never moved the entire game with almost any of the troops.  That being said, the Shaggoth with the 3+ save in v3 is really survivable.  I was able to heal him up almost fully by the end and with save stacking (should defiantly be removed) I was usually at 2+ save and he just tanked the rest of the game.  His damage is soooo swingy though, made worse by the ethereal.  Some rounds he'd kill 6-9, other's he'd do nothing.  It felt like there were always 3 left at all times and they'd just come back.

The Chimera was also weird.  My current tactic is to back up my front line (DOs in this case) with the Chimera for "unleash hell".  It did it's job with that.  Usually, against melee armies, I get one round of good solid attacks from it, then it goes down.  This time, for some reason, it didn't so much damage but survived for a really long time.  My opponent was putting a lot of attacks into it but didn't roll great and I rolled really well for armor saves, but then it did sometimes no damage back anyway.  It was strange.  It did keep a ton of attacks off my Shaggoth until I could knock them down to a manageable amount.

I helped my opponent put together a 25 point AoA character prior to the game and he gave her 6 damage 2 attacks but not much defense.  That being said, the 4+ ethereal is almost enough by itself and  she was super strong.  I got pretty lucking with the cockatrice.  This was the first time playing it and it did well.

We didn't use battle tactics and instead used environment cards and AoA cards that were built for this campaign.  Cucuhlag got a card that let him attack first in combat at the cost of 3 VPs.  Gamewise, probably not smart to take, but I thought Cuchulag would want that.  It totally matched his namesake that I based him on, the Celtic hero Cuchulain,  May opponent pretty much took all the VPs but burned them early to stop me from summoning onto them.  I ended up holding one until the end of the game plus I got 3 VPs from an AoA card to offset the 3 I lost. 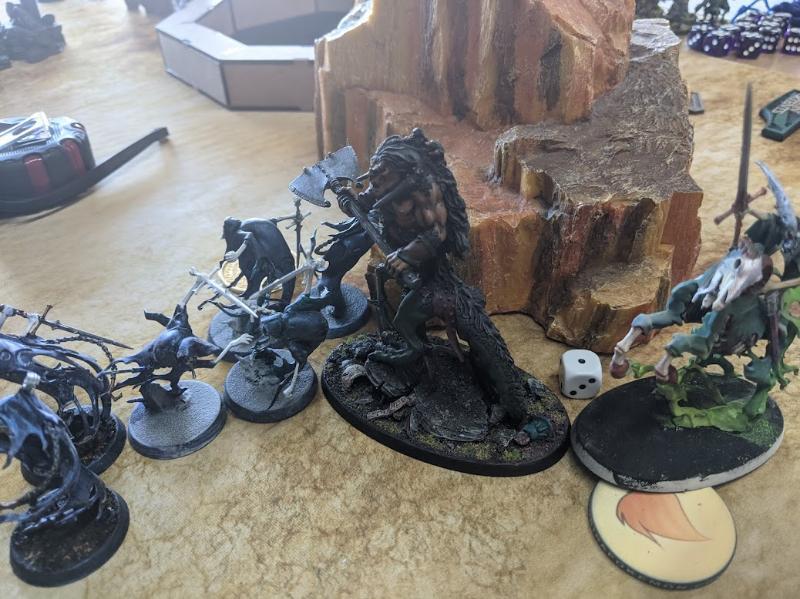