Kronak looked out at his enemy, "So the followers of the blood god have found this amber deposit as well.  He will be happy with the blood flowing today, but it will not be ours.  Cuchulag, we will handle the brunt of this.  Go to the right flank and deal with his lesser followers and try to stay in the fight this time."

Cuchulag grumbled at the disrespect but followed the orders.  He sent his group of Bestigors to sweep around and attempt to outflank the enemy.  As he looked out, he saw what appeared to be a new champion of Khone who he'd not met before.  He rod a giant Manticore and had the smugness of all of these followers of these so called chaos gods.  These are simple pretenders of chaos.  He swore that he would would show the blood god who the real champion is.  He would show them what true chaos is. 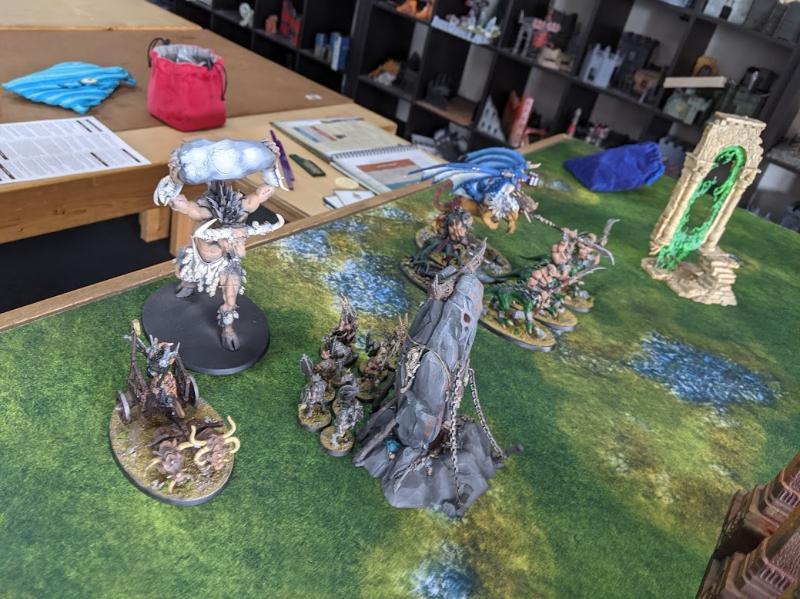 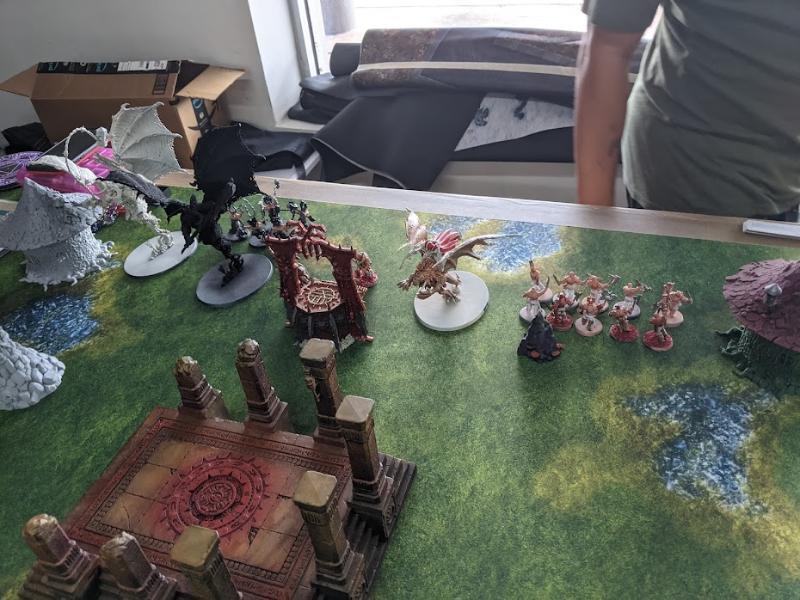 Predictably, the followers o Khorne immediately charged forward throwing all of their might in a reckless pursuit.  The huge bloodthirster, who appeared to be in command hurtled himself into the Dragon Ogors and although the newly bound Chimera severely wounded him with the lighting breath the general killed all of Kronak's Dragon Ogor guard. 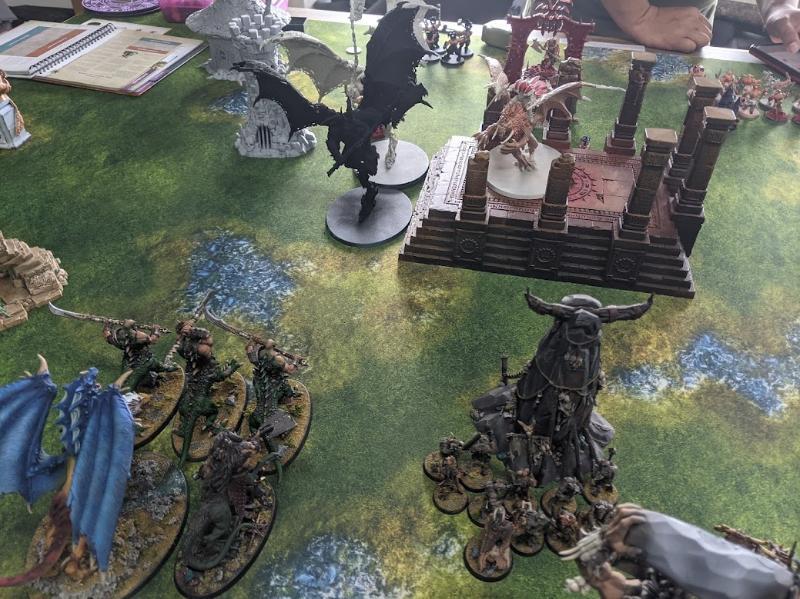 In response, the bloodthirster paid for his recklessness with his life, though the speed of thee great warrior surprised Kronak and his Chimera was severely hurt. 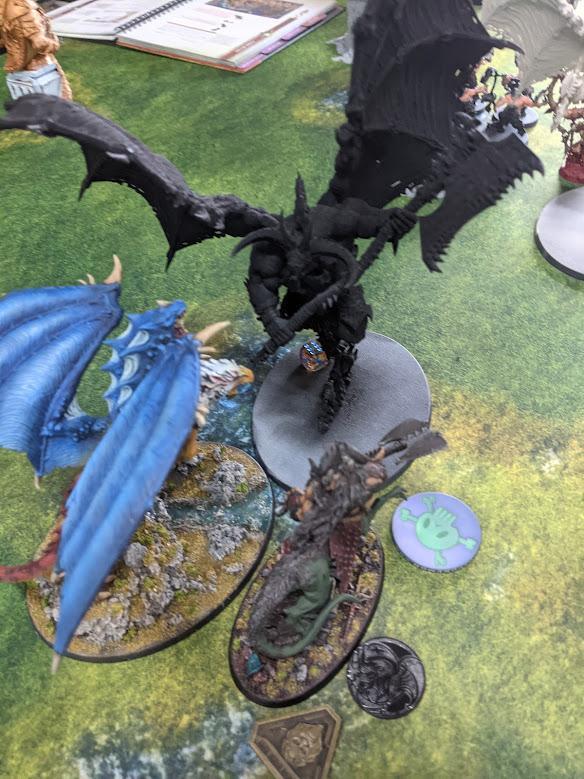 Cuchulag led the right flank and fared very well.  His outflank maneuver worked flawlessly and his bestigors made quick work on the reavers. 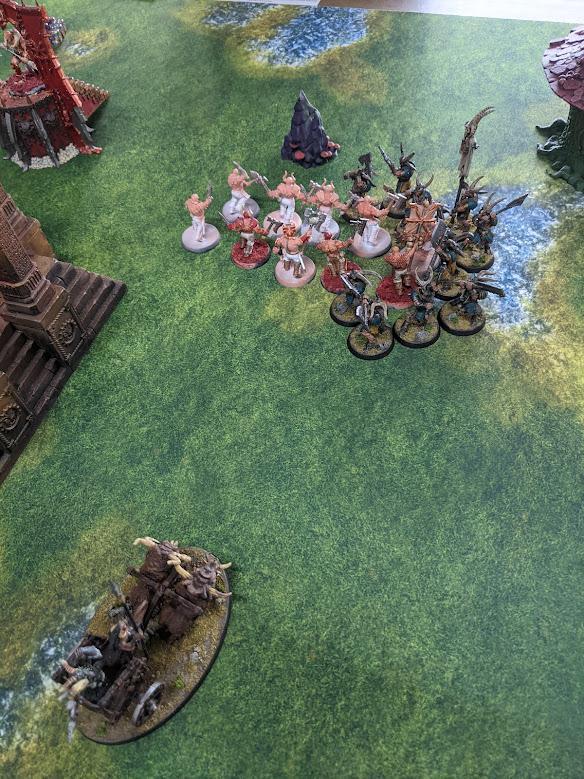 At that movement, he saw the veins of amber break the surface in front of him.  "Of course, I am the favored of chaos.  Glory will be mine today!".  But the champion of Khorne would not let it be that easy.  He appeared out of nowhere on his terrible beast and slaughtered the bestigors where they stood.  His manticore put it's paws on the amber vein as the chaos champion looked over with an evil smirk. 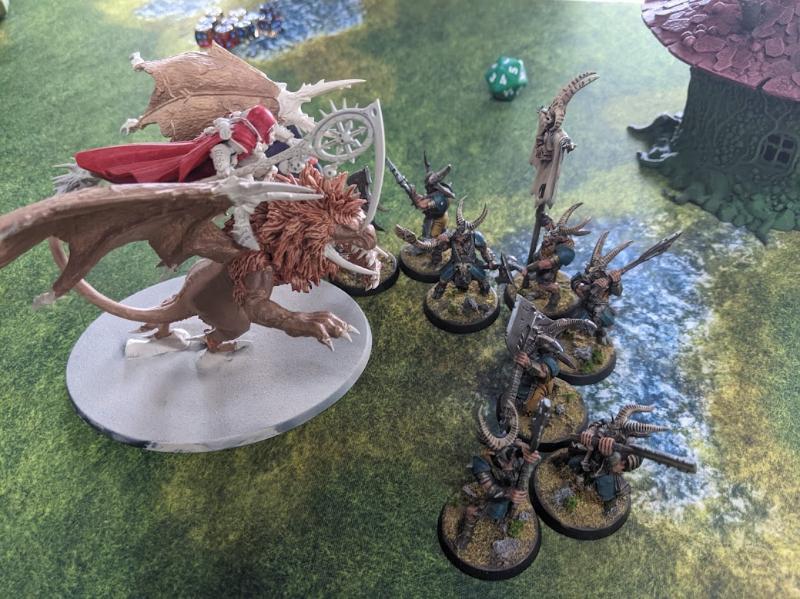 At the same time, Kronak was being beset by wrathmongers of Khorne but his adamantine scales protected him and his great axe did the work he expected it to do.  Though he was taking damage, he held up his loadstone and called down the lighting.  He felt rejuvenated and his enemies perished. 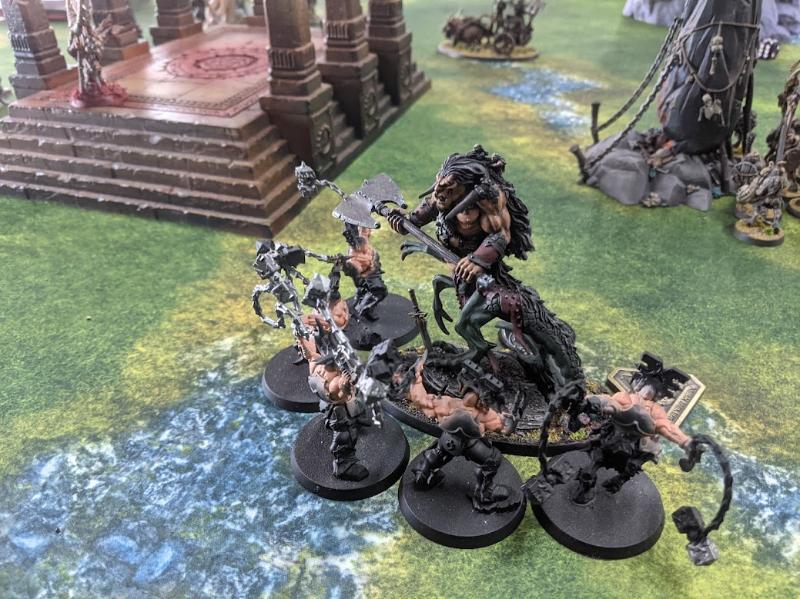 Cuchulag, not to be outdone, call forth to the champion of Khorne and spurred on his great chariot.  He crashed headlong into the great beast and his huge axe cleaved it in two while his tuskgors crushed the champion underfoot.  "This vein is MINE!" 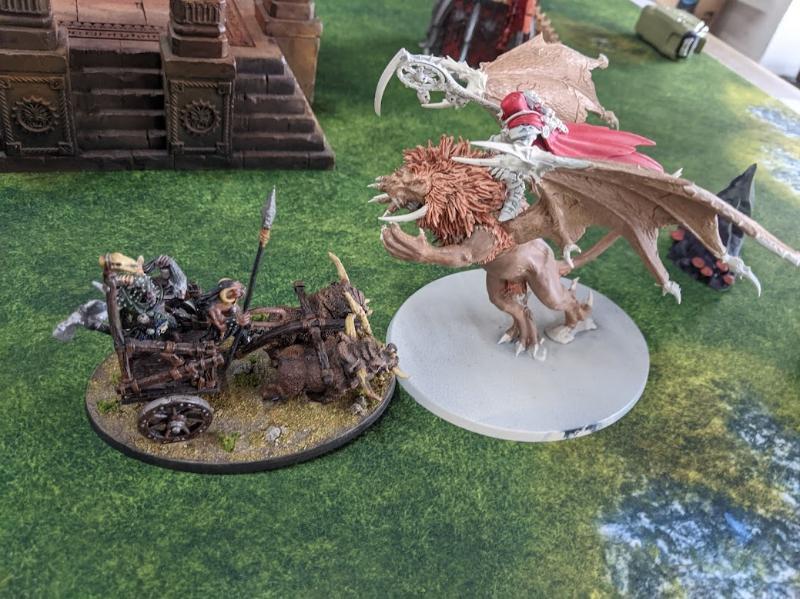 At that point more ungors came in on all sides of the battlefield and the field was fully controlled.  Kronak became emboldened by the success and charged the last remaining bloodthirster to finish the battle once and for all. 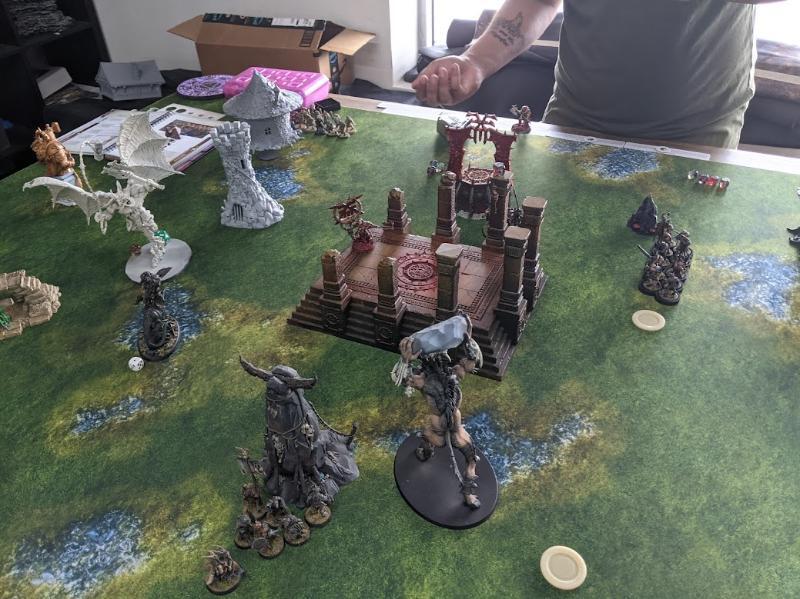 It was at this point that his scales failed him.  Though he did great damage to the bloodthirster, every flaw in his scales were found and Kronak went down. 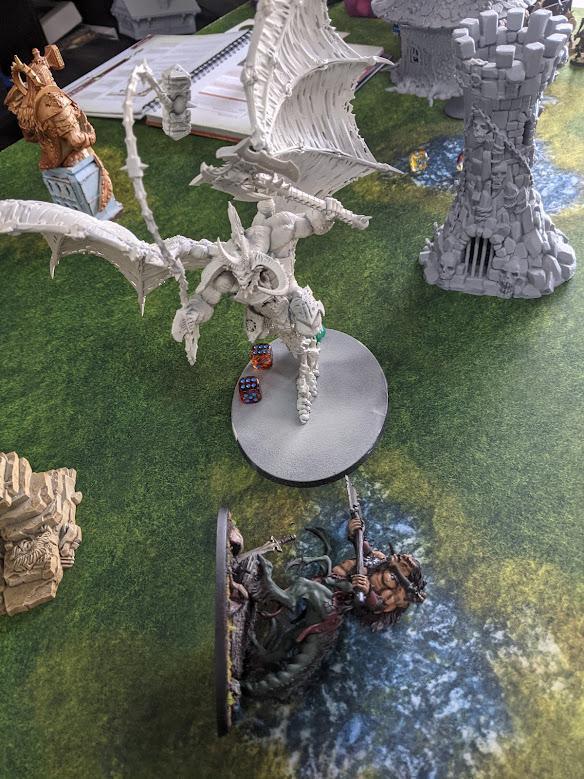 Seeing this, Cuchulag took command of the battle.  He pressed forward destroying a priest of Khone and brought his remaining beasts forward to protect the amber.  Daemons came seemingly out of nowhere and that bloodthirster slowly healing from the wounds Kronak had inflicted.  In the end, he held the field, and the glory.  He fought the great daemon, and though he needed to leave the battlefield, he left as the victor.  If Kronak survived the day, he would have to respect Cuchulag, for it was he who won the day! 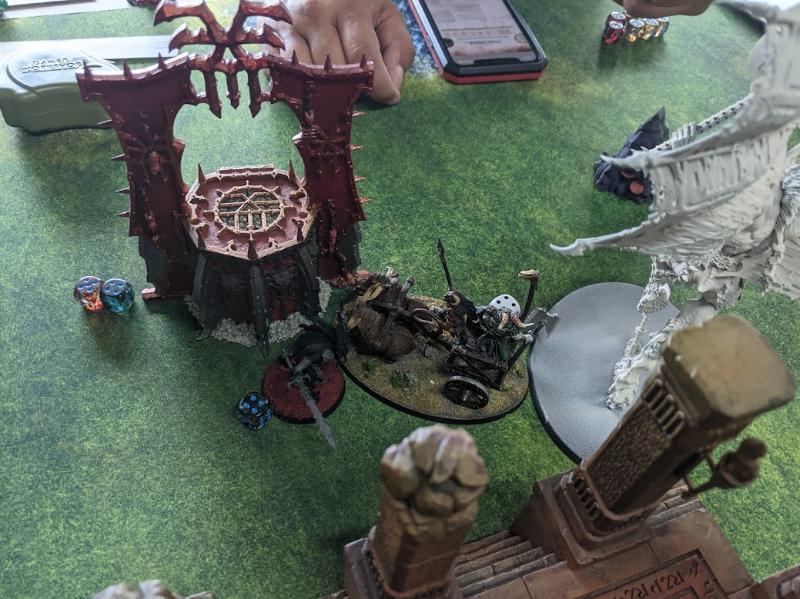 We played a 1000 point game using the GHB2021 battle "The Veins of Ghur".  We each had a 25 point Anvil of Apotheosis character in addition.  His army was two bloodthirsters (Incessant Rage and Unfettered Fury), a unit of Wrathmongers, a unit of Bloodreavers, a Bloodsecrator, and a Slaughterpriest.  He was a tad over 1000 pts so I just took a Triumph in compensation (reroll charge).  My army was a Shaggoth general, shaman, ungors for slaughter, 1x10 bestigors, 3 Dragon Ogors, a Chimera, and a Cygor which come to exactly 1000 pts.

Since it was the first time using the new Dragon Ogors, they of course were removed from the table before ever doing anything :).  I shot and then charged his general, thinking it was an easy kill but totally forgot that he attacked first in combat.  Somehow, the Chimera survived though and killed it.  I was using a tanky version of the Shaggoth after watching the Bartoz on AOS Coach.  I was able to keep him in a 2+ save most of the time and he did great until he didn't.  took the second bloodthirster to 12 damage (our of 14) but was done 6 hits back with a -2 rend and d3 damage.  He failed every save and just barely died.  It I'd have made even one save, he'd have lived.

Overall, it was a fun game and very BoC victory.  I got really lucky with objective placement and dropped some ungors in his back lines that he had to deal with, keeping him busy enough, and far away enough that I was able to hold the other two for the rest of the game.  The Cygor did fairly well.  I rolled really well to hit on his rock, though never did more than 2 damage.  I mostly just held him in the back waiting for a chance to use a monster on something.  He did help out with a couple battle tactics.