As this is the first post I'd like to explain some of the lore of this faction. I'd like to mention that I tried to distance the Gravetide Corsairs from the Vampire Coast itself, as I want it to be a standalone faction with it's own backstory while retaining the vibe of a pirate-centric faction, although there are some rather obvious and outright stated references to Harkon and his crew. For the purposes of this faction I created an entirely new deep-dwelling race of shapeshifters original to the Mortal Realms called the Abyssals. The Abyssals were almost in their entirety wiped out by the Idoneth during their escape from Teclis as they were the first ones to have their souls consumed by the Deep Aelves, for they had some unique magical properties only encountered in their raced and appropriately dubbed Abyssal magic, a forgotten kind of Shyish magic now only wielded by the mostly feral and decrepit Abyssals, which after hundreds of years of hiding in the depths have devolved into an almost bestial state only able to use their powers in an instinctive manner. Only a few of them remained of sound mind and were considered the ruling caste of the underground Abyssal society. During Nagash's conquests of the realm of Shyish, he encountered one such Abyssal, the most powerful of the ruling sorcerers, Shra'ghot. The Abyssal would do anything to return his race to it's former glory, so they offered him a pact of loyalty with the intention of stabbing the Supreme Lord in the back when they have grown in power sufficiently to sperate their new empire from Nagash's grasp. As the Supreme Lord isn't that foolish to not see through the Abyssal's plans, yet was curious of the creature's abilities, he agreed to this pact on one condition, Shra'ghot would be supervised at all times by an envoy chosen by Nagash himself. After finding the fitting soul to assign to the creature, he conjured it back to life, giving form to Coraletta the Mad One, a vampiric corsair captain that served under the command of Luthor Harkon himself. With a new dark alliance formed, Shra'ghot has been crowned the Grand Admiral of the Undead Fleets and now seeks revenge against the ones who robbed them of their long lost legacy in the name of the Supreme Lord.

So what do you think? I've already created a lot of warscrolls for this new army, here are the two "heroes" of this new story to give you a hint to what's to come in this project. 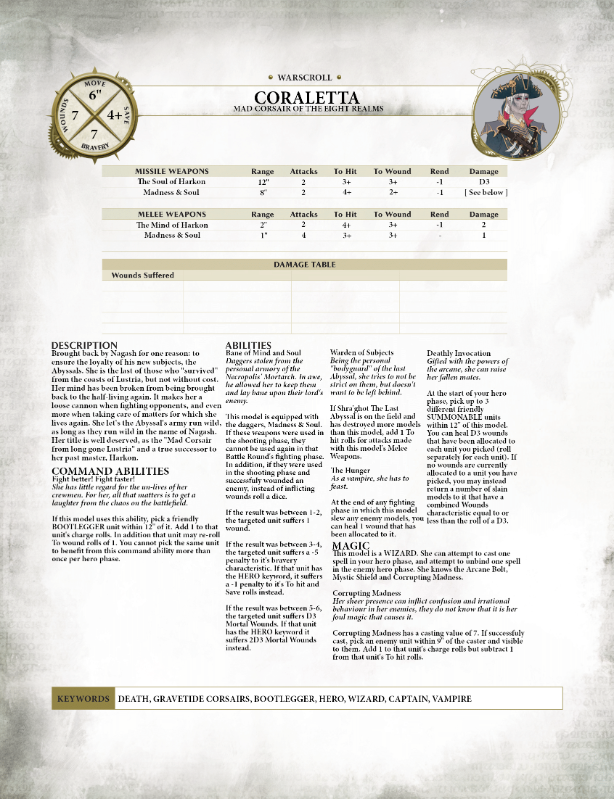 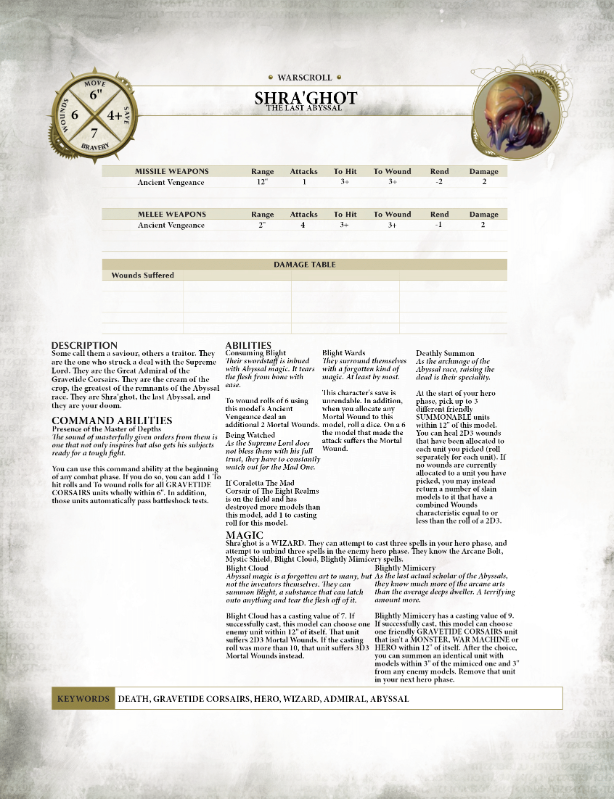 I'd like to receive some constructive criticism from anyone who'd like to share their thoughts on what they've seen so far. Also, I've kind of hit a creative block when it comes to writing rules for the faction itself so if you have any suggestions I'd gladly read them.