The first set of Ultimate Bragging Rights (beating your opponent with your own list and then turning around and under the same conditions beating them with theirs) came about in arguably the most predictable way.  The player who had built the Khorne list actually had even more experience playing Mawtribes so when the tables flipped, even though the opponent’s  list they were playing wasn’t the Triple Frostlord build they’re known for running they still had plenty of familiarity with how the faction worked. 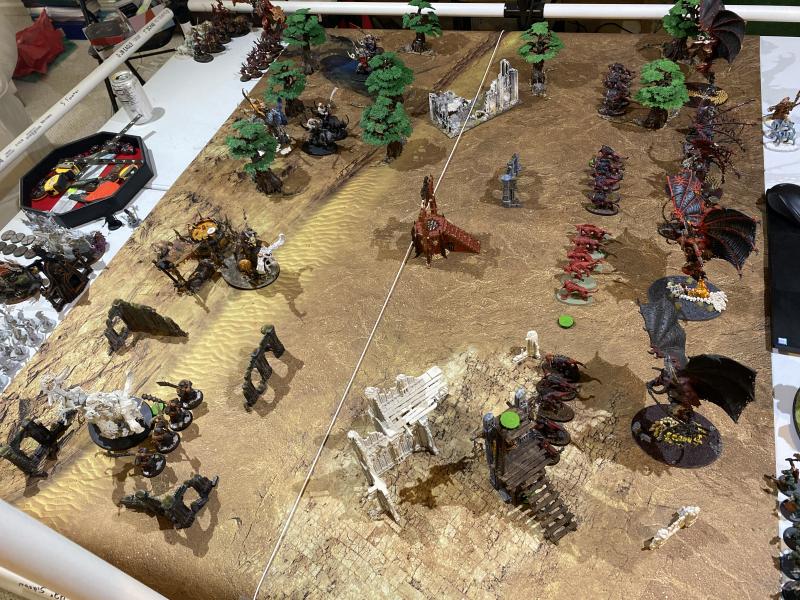 That said, they hardly played it the way the BCR half of Mawtribes is normally played.  There were no  rapid advances followed by daring charges in the first few turns.  In fact for two factions that tend to favor more aggressive play styles piloted by two players who tend to favor forceful opening gambits the early going was... pretty much a waiting game as the players secured their own objectives and tried to draw out their opponent’s units.  Small forays with Flesh Hounds were made and the Icebrow and his kitties came out of ambush to waste Skarbrand’s powered up profile in R2 but other than that the Stonehorns and Bloodthirsters were largely avoiding each other. 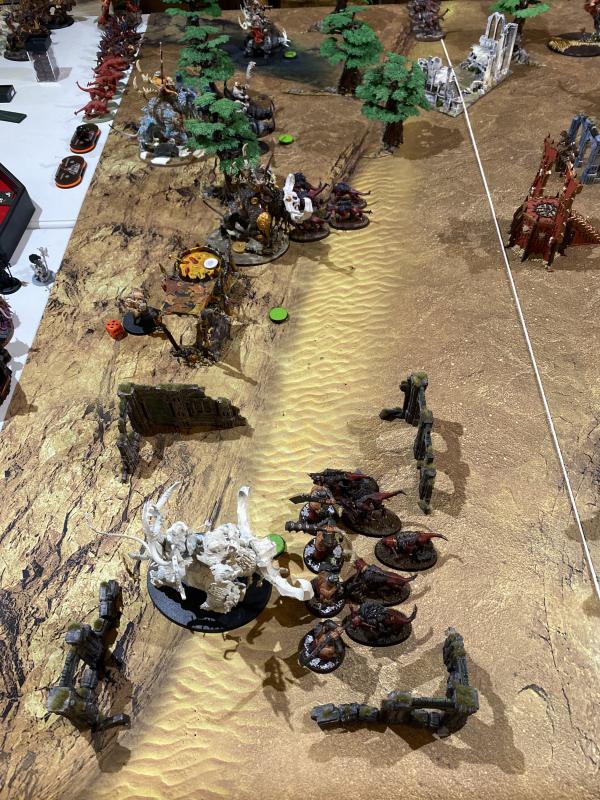 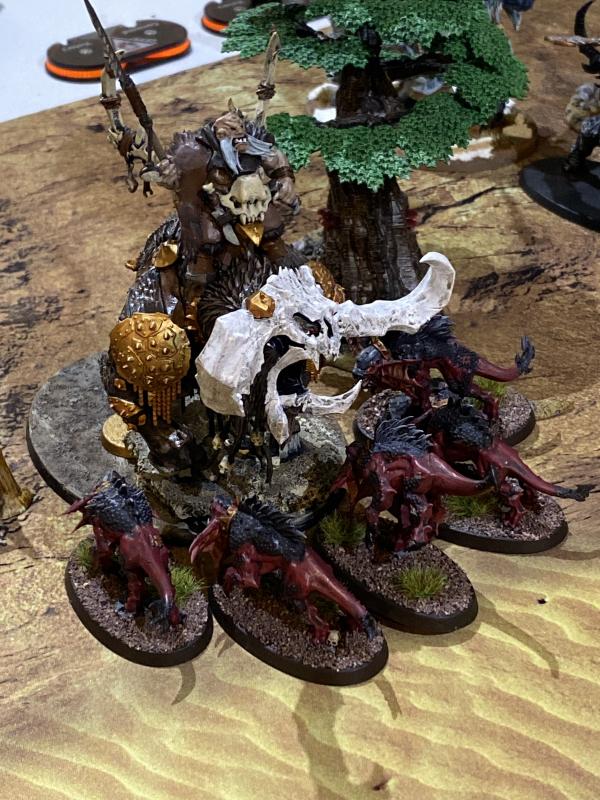 Really the biggest difference in the picture below from the starting one above is just the Flesh Hounds were now Blood Tithe... 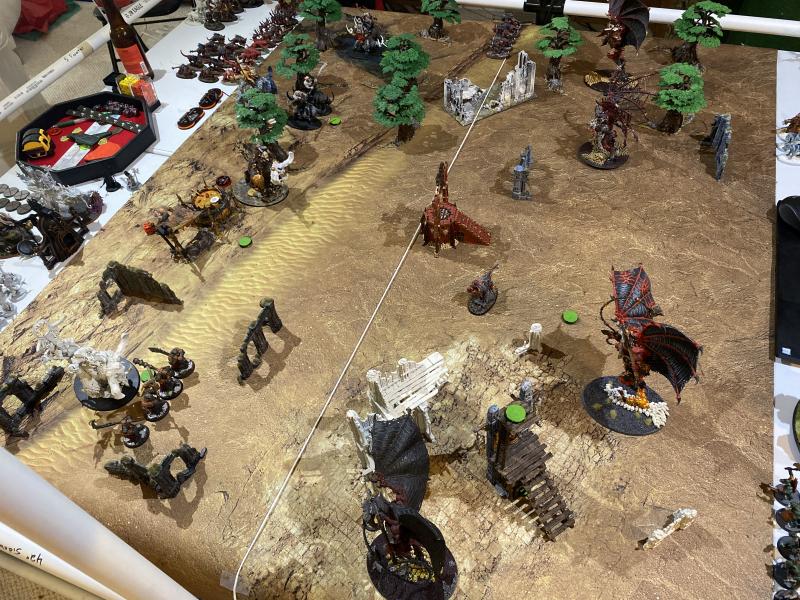 The player piloting Khorne’s patience broke first as they began advancing up the table, which allowed their opponent to pick the charges for the Stonehorns.  The damage from the charges and the resilience of the Stonehorns’ 5++ offset the activation benefits.  As a result, once Combat was truly engaged it was over pretty quickly and we had our first flip of results.

The second set of Ultimate Bragging Rights took a lot more effort as it required piloting the 0-4 Bonesplitterz list to victory against the 4-0 Fyreslayers.  I reported this battle rep in pretty decent detail in the Fyreslayers thread but the basics were that it came down to leveraging the battleplan’s multiple objective format to score points on the half of the board the 20x Hearthguard Berzerkers were not on while slowing their advance in their half and avoiding a big fight on that side as long as possible.

While in this case both players lacked experience piloting the other’s faction it still epitomized what I’d pictured all this time when I’d thought about this style of play.  Winning both games required you to leverage your lists strengths first and then exploit its weaknesses second, and with only the tools at hand.  If the Bonesplitterz had been Drakkfoot the tools available (e.g. negating any wound negation...) would’ve been pretty solid but as it was it required a bit of MacGyviring to get it done.  For example, ideally you’re getting Savage Big Stabbas into your opponent’s MONSTERs, in this case Magmadroths, for all the bonuses they get.  In this match what mattered most was their movement to get them into a position to speed bump the Hearthguard Berzerkers.  This caused them to waste some of the Vostarg movement bonuses in R1.  Keeping them in the middle of the table an extra turn. 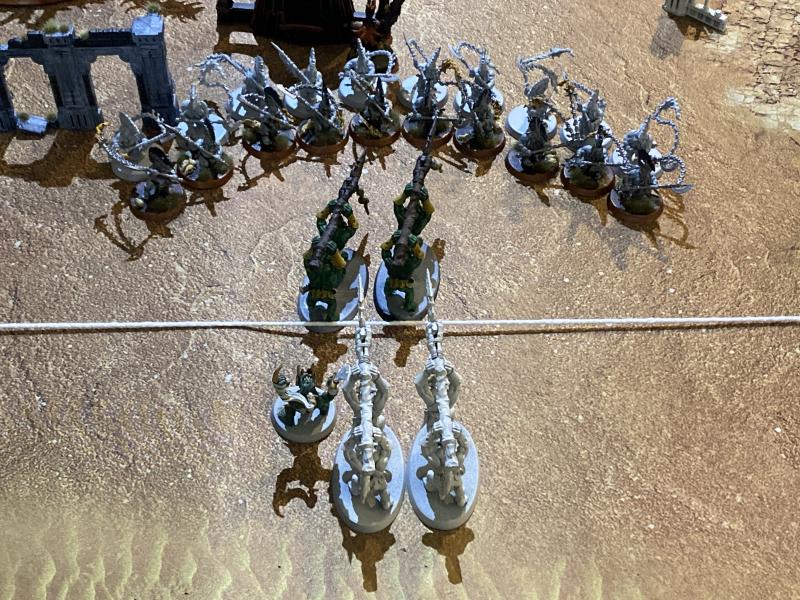 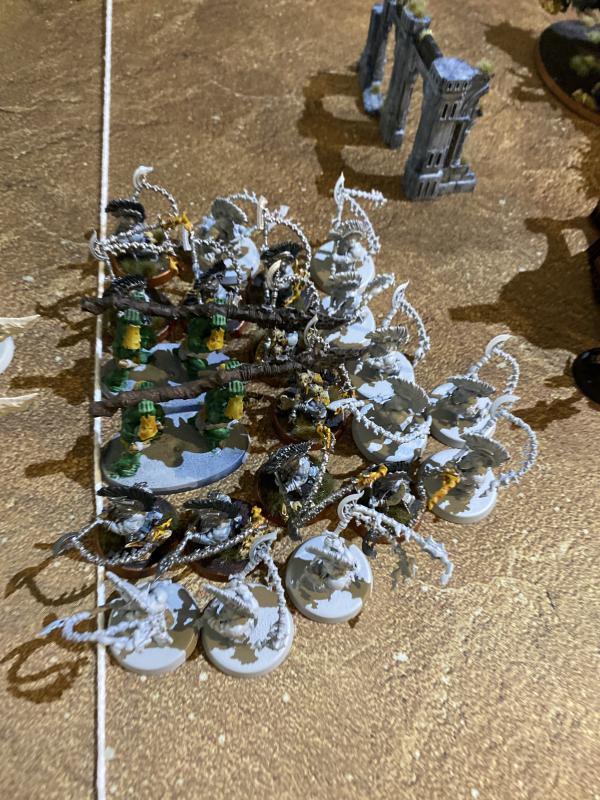 At that it still required some luck with initiatives (I’m notorious for rolling 2s here but actually won two initiatives on them this game..) and the Rogue Idol still being pissed if at Forgeworld for discontinuing him, taking it out on any enemy models that might be around.

But ultimately happy that the format did show that it isn’t just about the list with two match flips now in the books.