Irongut: Not Falling for That One Again... 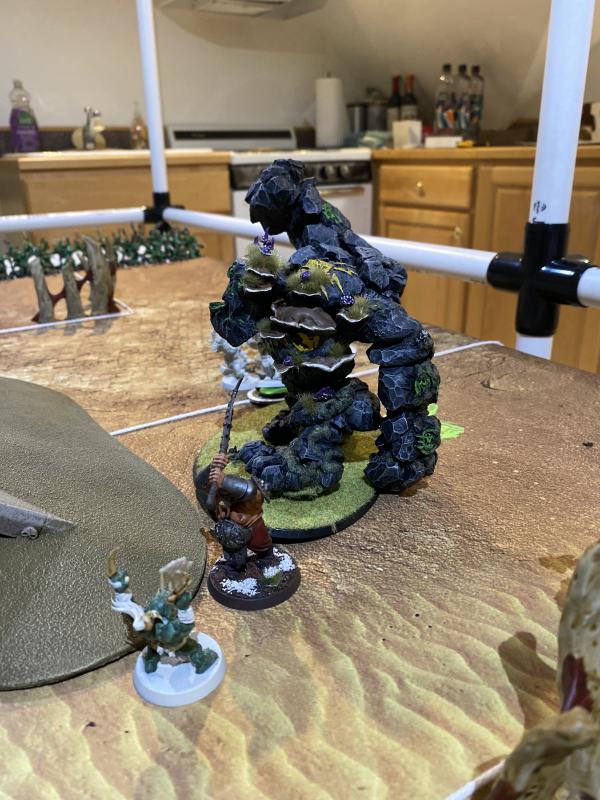 This encounter ended how you’d expect it to but the overall game had lots of twists and turns.

Had been hoping to get more votes into the poll before posting but oh well.  Don’t want to get too far behind on these reports.

Starting with Bonesplitterz deployment and decision to go first.  While the Mawtribes frontline deployment is consistent with their desire to get out and into the thick of things we were a little surprised to see the big block of Arrowboyz right up front instead of screened behind the 10x Savage Orruks. 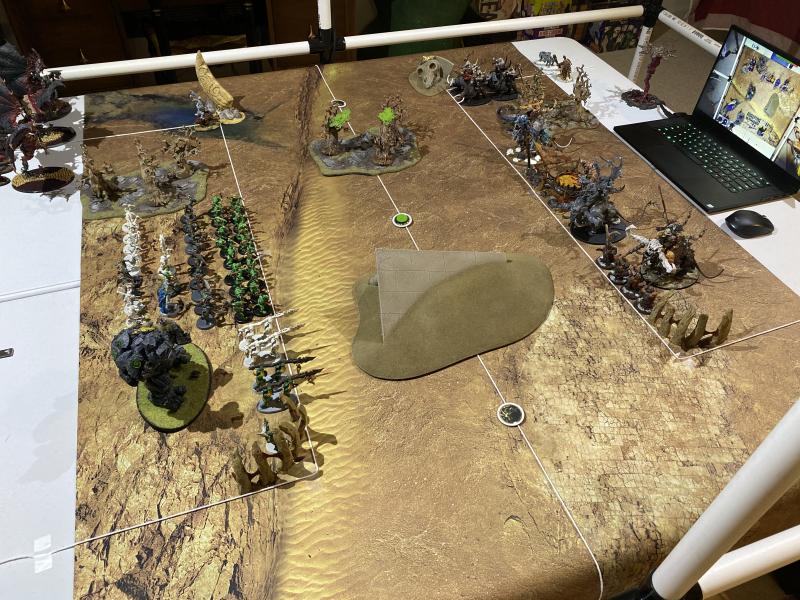 This was partially explained by the Bonesplitterz player deciding to go first and using their Hero Phase movement and regular movement to get that big block into range to shoot AND claim the primary objective in the middle.  The BS player was hoping to do more but the Butcher successfully unbound one of the spells they were counting in to buff that unit so while it did put some damage into the Stonehorn Beastriders they are still Stonehorn and thus shrugged more damage then maybe BS expected?  On their turn the Butcher would empty the Mawpot, further reducing the impact of those opening shots.

(The incline on the terrain piece made the sideways position untenable hence the Big Stabbas temporarily in sides..) 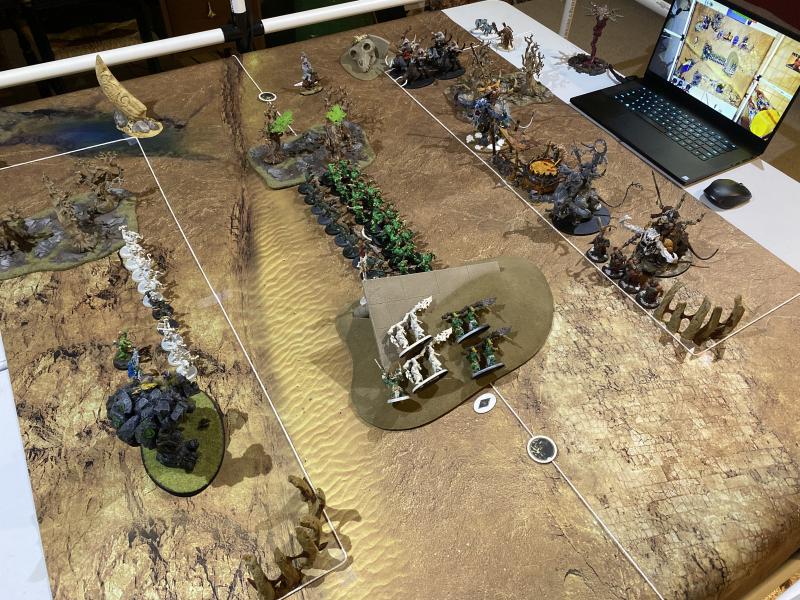 The other big BS gamble was charging the Maniak Weirdnob into the Mournfang on the Flank. 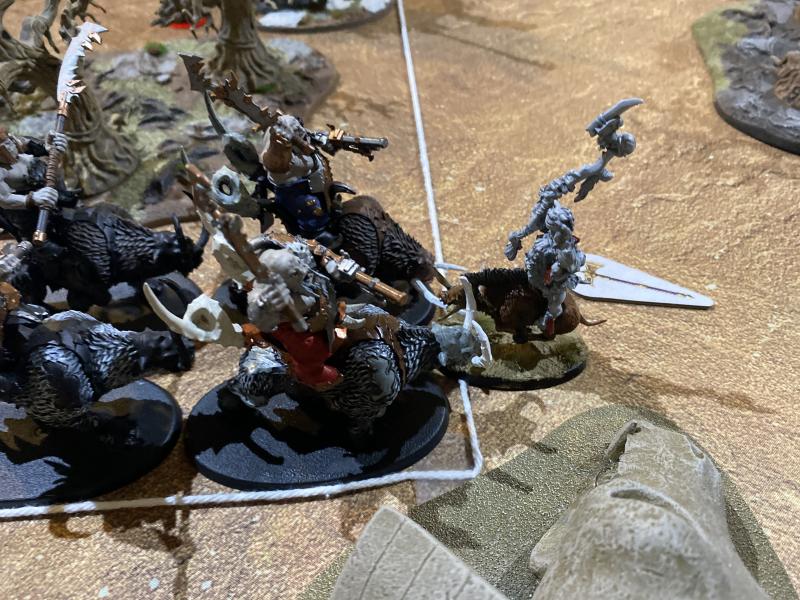 Damage was done again but not enough to prevent moving parts unit past the Maniak towards the objective on Mawtribe’s turn.  Meanwhile the Arrowboyz were incredibly exposed to a Stonehorn Stampede in the middle (Our Huskard on Stone Horn Proxy is on left).  Fair to say this went very well 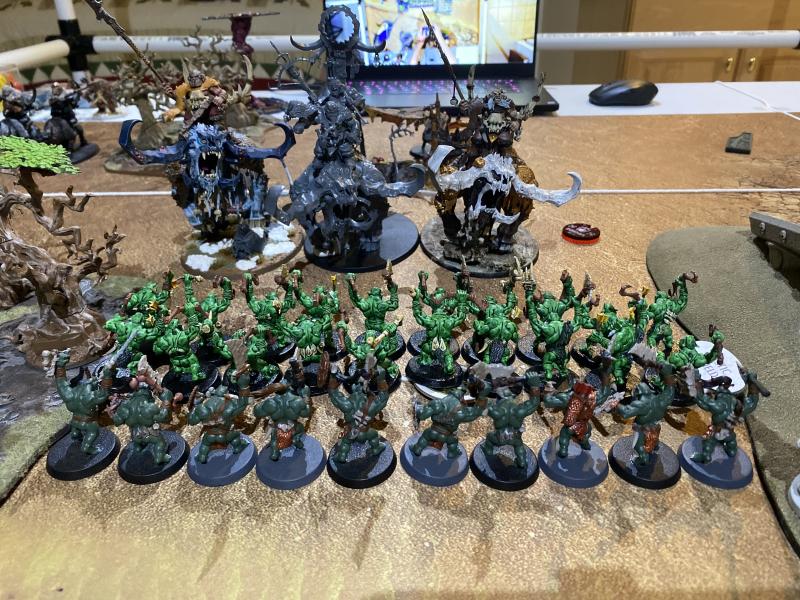 The Ironguts were also moved up enough to take the objective on the other flank while Icebrow Hunter and Frost Sabres popped out of ambush to screen the Western objective. 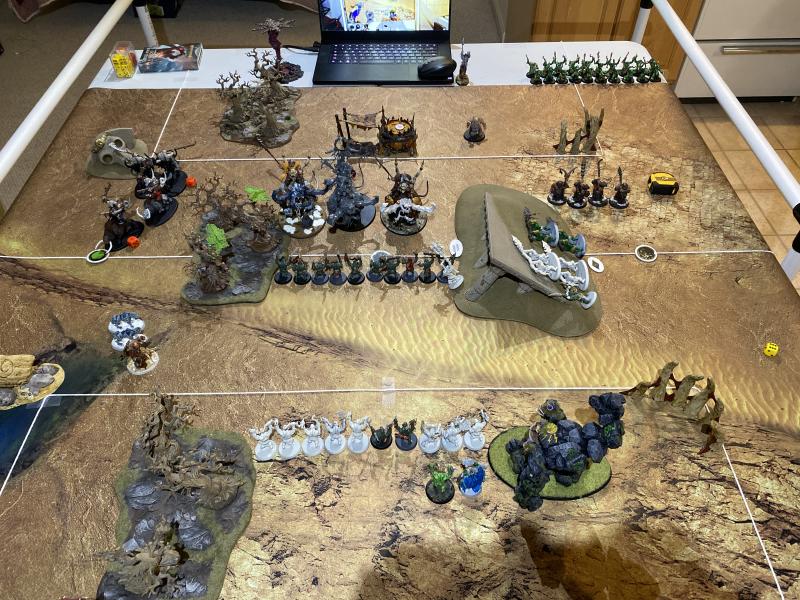 If Mawtribes had won the initiative this one might have been very short but BS got it and ran away... sorry, Kunningly Retreated, from the middle.  One unit of the  Savage Big Stabbas made an end around onto the Stonehorns though. 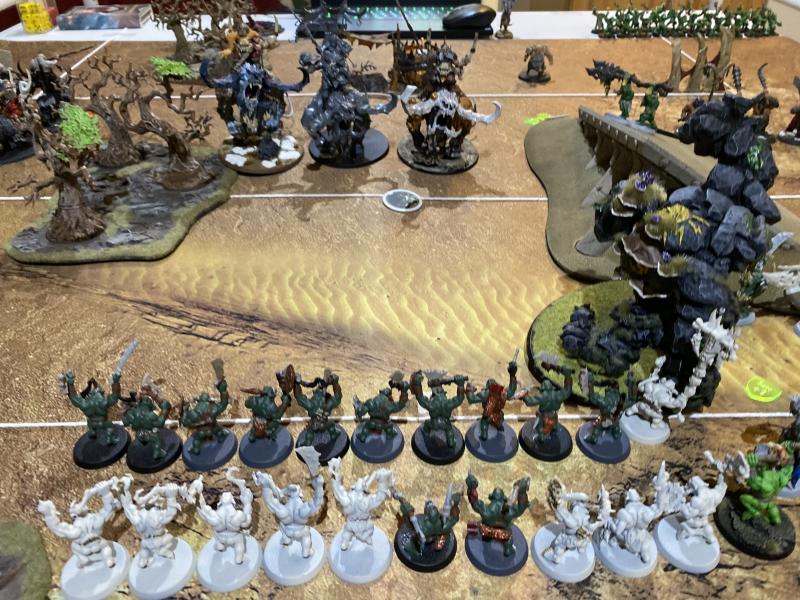 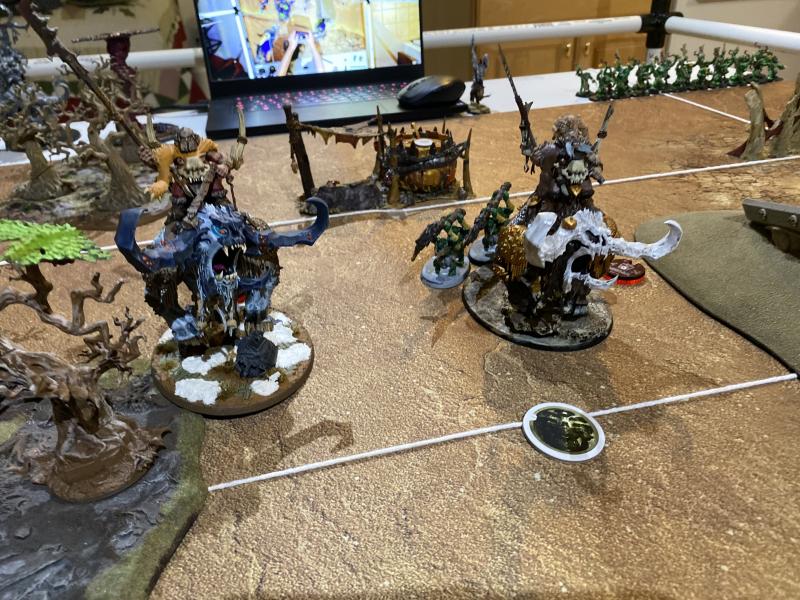 They’d do some significant damage, killing off the Stonehorn Beastriders but the Frostlord would drop kick their carcasses back into the Mawpot, refilling it.  This again would allow the Butcher to mitigate the damage done to the Frostlord by the Stabbas final fling.

For the rest of their turn Mawtribes largely played for points leaving the Stonehorns in the middle but the did charge the Ironguts into the remaining Big Stabbas and the Icebrow Hunter and Frost Sabres into the Savage Orruks. 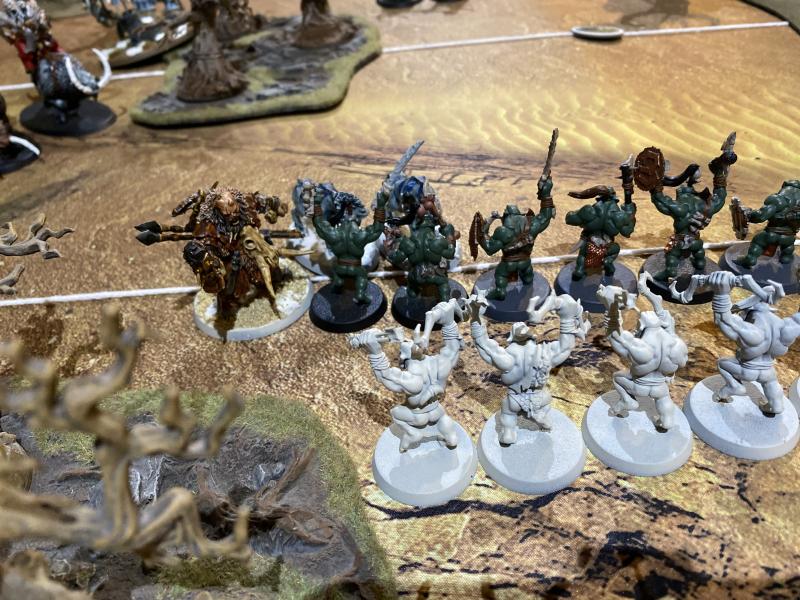 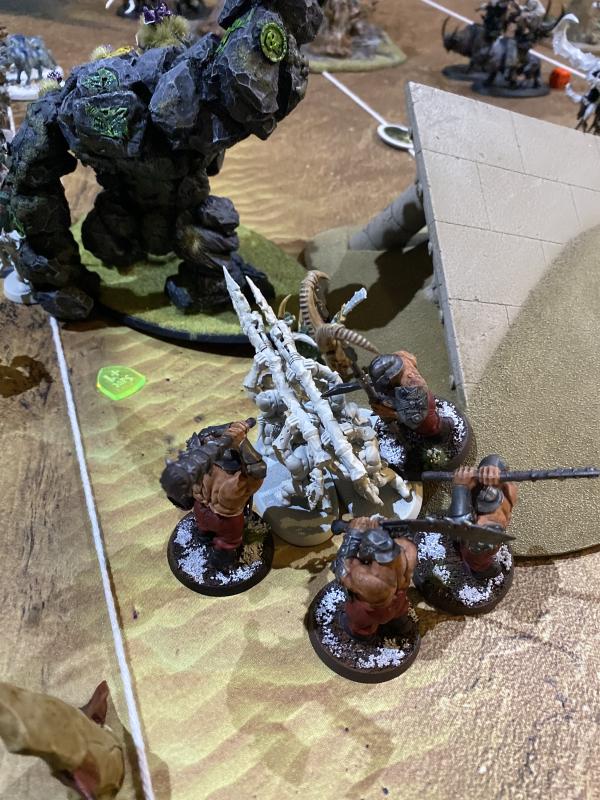 BS again won priority and with the objective falling on the Eastern Flank again, Kunningly retreated in that direction. 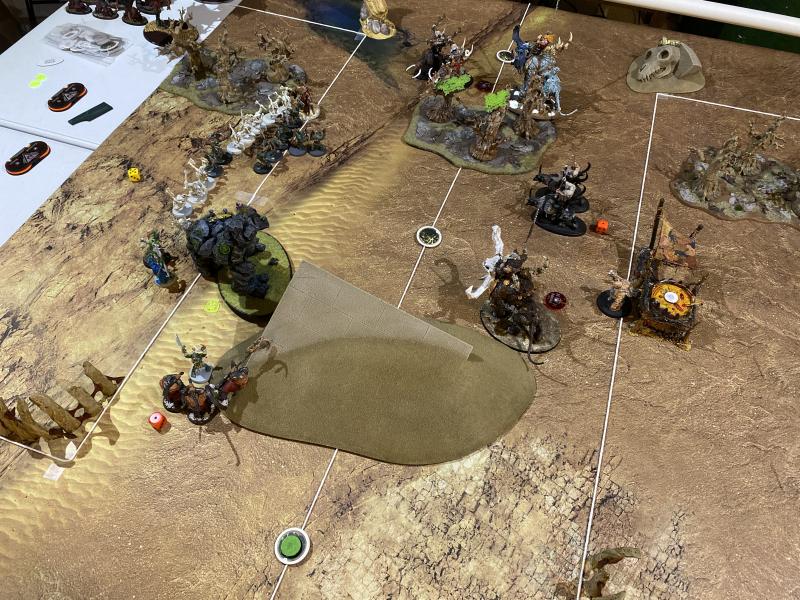 Pebbles (The Rogue Idol) was able to finish off the Ironguts (as shown in the picture that started post).

On their turn though Mawtribes didn’t decide to challenge the primary objective with Pebbles and the small block of Arrowboyz on it but instead did clean up work in the middle wiping out the remaining Savage Orruks and the other Savage Big Boss proxy. 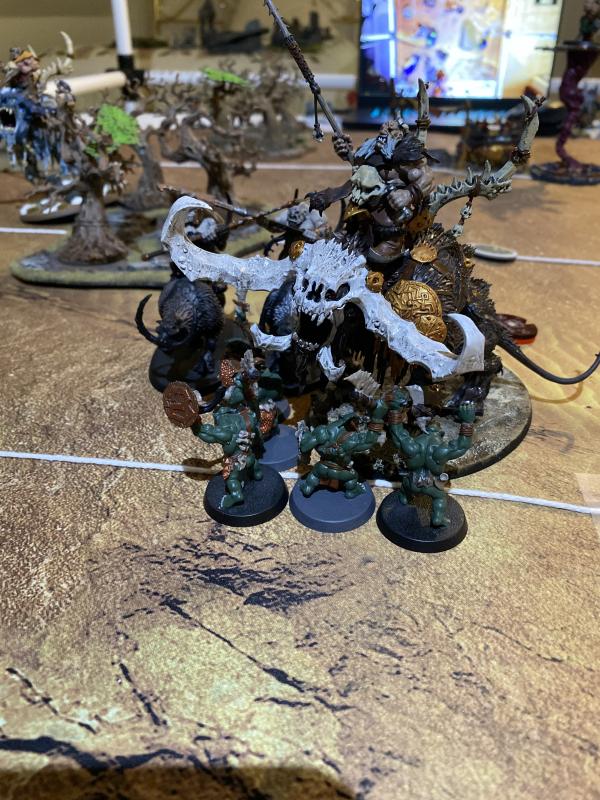 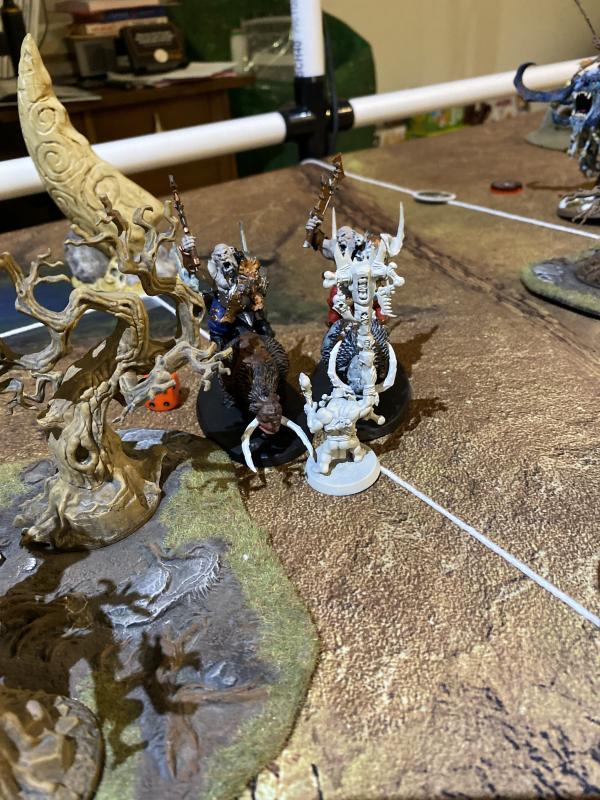 Our initial reaction was that this was a lower probability play than charging the Frostlord (degraded though he might have been) into the remaining Arrowboyz with the probability of taking the objective if he survived given the counts as 10.  But fortune ultimately favored the Mawtribes as when the primary objective  shifted all the way across the board to the West at the start of the Fourth Round BS conceded the game as they were already behind on points and didn’t see a viable way to contest enough with all the surviving Mawtribes units still in the way. 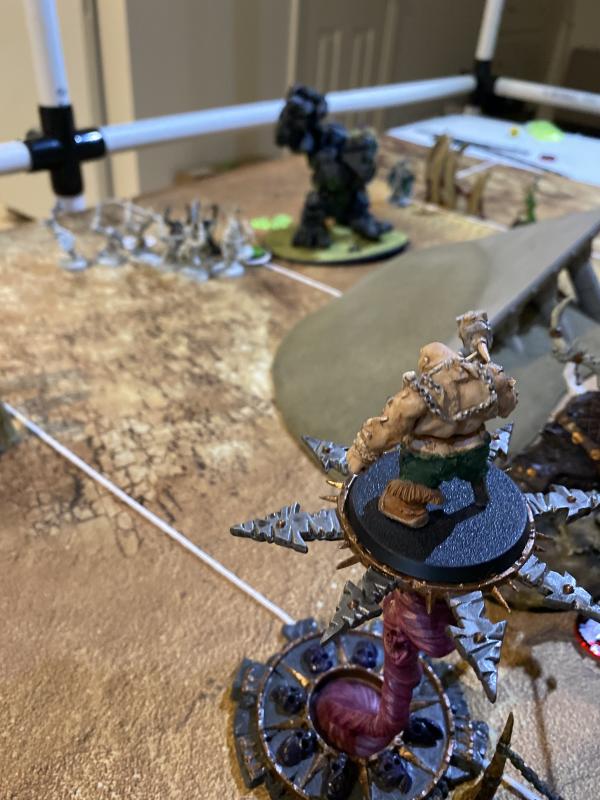 With the Butcher surveying his victory the Mawtribes start off the tournament 1-0.   Can they keep it going in Scorched Earth against Khorne?  Can Bonesplitterz get redemption against Fyreslayers?