Hey there Neckbeards! Welcome to Painting for Chumps #2!

My Daemon Prince is a model I've had in my backlog for quite a while now, I had a really cool idea on how I wanted to paint him and didn't want to mess things up, so it took me a while to really get started and paint him up. For this episode of Painting for Chumps I'm going to go through the whole process of how I built and painted the model. 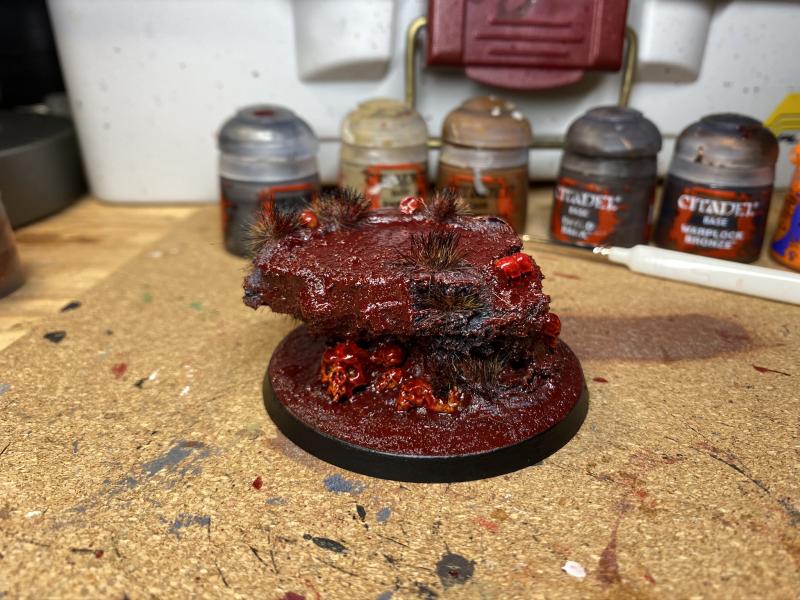 Given that this guy is the centerpiece of my whole army, I really wanted him to stand out and be an imposing model, so for the base I decided that a little island thing surrounded by a pool of blood would be a good place for him to stand on. I took some cork board and fiddled around until I got a pedestal-esque shape that I was happy with. I primed the whole thing black using some cheap store bought  black primer (No need to waste my precious and ever-dwindling supply of GW's God-awfully expensive Chaos Black). Once that was done, I added some Astrogranite Debris all over, integrating the cork board into the flat bit of the base that would be a blood pool and building another space for a small blood pool on the top of the pedestal as well. I also slapped some Astrogranite Debris on parts of the cork board to make it look a little less like.. well... cork board. Ever the Khorne devotee, I grabbed a bunch of skulls from what is undoubtedly GW's greatest product ever, the Citadel Skulls set and slapped them all over the base. Once the Astrogranite Debris was dry, I drybrushed all the rock with Celestra Grey and followed up with a HEAVY amount of Blood for the Blood God pretty much everywhere, around the pedestal, on top of the pedestal in the little pool, on some of the skulls, etc. I then took an old Stormcast shield bit I had lying around and a spiky wheel thingy that came with the Daemon Prince kit, painted them and put them on the base as well. I splattered them with Blood for the Blood God, and the base was finished. 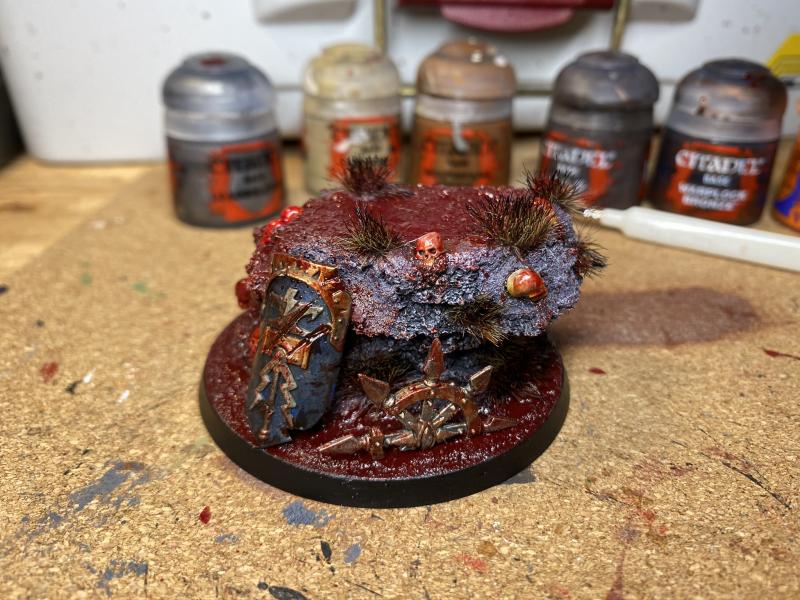 So my plan was to have this model skewering or dragging along a Stormcast Liberator, I thought it would look totally dope and wouldn't be too hard of a conversion. I blind bought a single model off of Ebay and unfortunately didn't get the pose I wanted, so I had to buy a unit of 5 liberators on sprue to get the pose that I wanted and have a full unit left over for my dads SCE army. Having the model pose I wanted, I built up the Daemon Prince and started fiddling about with various different poses. My original plan was to have the Daemon Prince's claws stabbing the Liberator right through the middle, but they were a little too small so I ended up having to settle with dragging him along instead. I viciously attacked the Liberator with an X-Acto knife and some clippers to make some nice dents, dings and slashes. One thing I immediately noticed about the Daemon Prince sculpt is that it's pretty dated, there are some HUGE gaps which I filled with Green Stuff, Milliput (which I FAR prefer of Green Stuff) or Sprue Goo. I didn't completely assemble the model, leaving parts in subassemblies like the tail, armor plates, the Liberator and the arm holding the axe. For the head I used the 40k option that comes with the kit, I thought it looked way more Khorne-esque than the other two options, so I just sanded the vent on the top off. 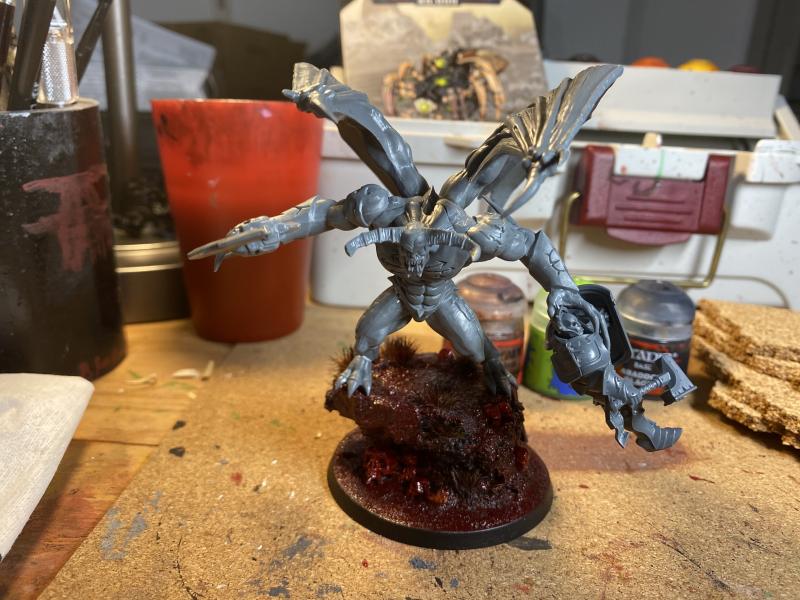 I primed the armor bits (leg guards and loincloth thingy) in a simple black, and the rest of the model in white. For the arm holding the axe, I primed the axe head and it's handle black and used some masking tape to protect it so I could prime the arm white. I wanted to push the contrast a fair bit more than usual with the red cloth and armor, so instead of my regular drybrushing I decided to do traditional layering instead. For my red, I basecoat it with Khorne Red, followed by a wash of Carroburg crimson. To highlight I used Wazdakka red, Wild Rider Red and a dot of Troll Slayer Orange at the brightest intensities. I really liked the result and I'll be applying this to the rest of my army. 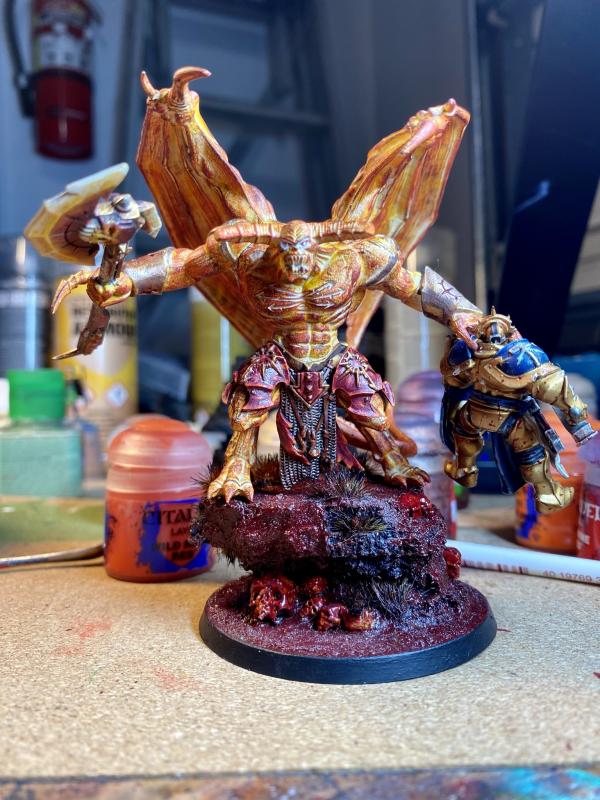 For the flame bits of the Daemon Prince I followed this super easy and quick tutorial from Citadel (I know, I know, how vanilla). In the case that, like me, you're probably too lazy to watch the video, I'll lay the steps out here. You're going to want to prime the model in white, and make sure the model is completely covered in an opaque coat I would go in with a brush and touch things up if you don't want to make a whip-cream puff of a model by blasting it with tons of primer. After that, take your budget airbrush... er drybrush I mean, and a nice bright yellow, in this case Yriel Yellow (paints listed below) and putting some paint on the brush, wipe it off on the pallet (Instead of a paper towel as you normally would drybrushing) and drybrush (or moistbrush I suppose) the whole model. The premise of this technique is that your building up cooler colors the more layers you drybrush to get a lava/fire effect. After you're done with the yellow, move on to a nice bright orange, and do the same thing, wiping the paint off on the pallet and moistbrushing (yep that's what we're calling it now) the whole model. With each successive layer you should start to focus more and more on the extremeties, the parts farthest away from the core of the model will be the coolest. Next up is an orangey red, from now on we'll be doing standard drybrushing, so get out your paper towels. Again do a full model drybrush, focusing more and more on the extremities. Repeat the same process with a dark red and then a black on the outermost bits, and that's it, you're done with the drybrushing! For the regular technique, dot the eyes with a bright white, which looks just fine I suppose, but in this case I wanted the eyes to stand out a bit, so I used the bright white to paint around the eyes and then dotted them with a bright red and yellow. For the last significant part of the model, the daemonic blade, I basecoated the blade in black and successively drybrushed on some dark red, orangey red, orange, yellow and white for the extremities. For the eyes on the little skull thingy I filled them in with yellow and dotted them with white. Once the drybrushing was done, I painted up some other small bits and bobs like the gold trim on the DP and that was that. 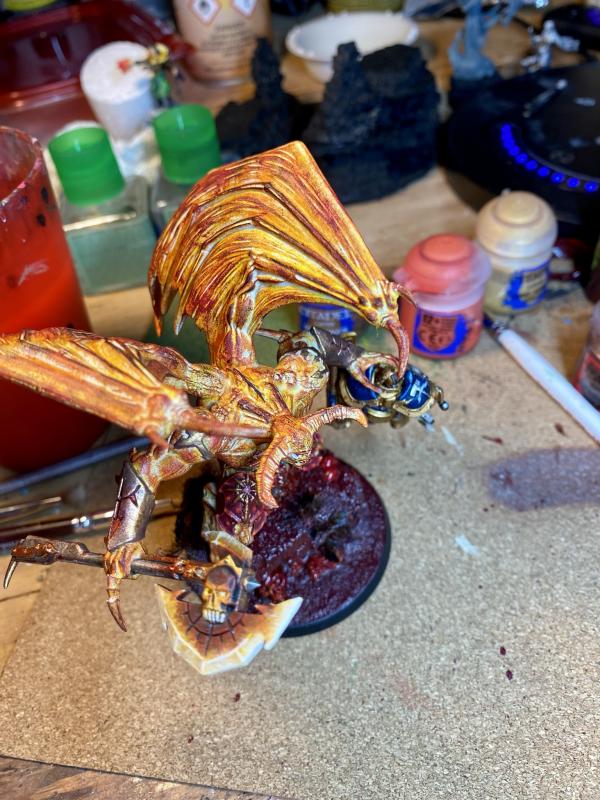 For the Liberator I followed the standard GW paint scheme and paint selection except I did the leather bits in a dark brown to match my dads army and dotted the blue armor with white to bump up the contrast a little, here's the link if you want to see the paints (listing them all below would make this post WAY to long). For the epic blood everywhere on the Liberator, I filled in all the major slashes with blood, got some nice streaking on the hammer, and filled the eyes in with blood (blood for the blood god I suppose). To get the nice splatter effect, I absolutely smothered an old brush in the Blood for the Blood God paint and using my Citadel Texture tool I flicked the brush against that to nice some nice random splattering (quick warning if you want to do this technique be prepared to have everything in a 3 foot radius spattered with blood specks). I superglued the Liberator on to the model and boom, the Daemon Prince was done. 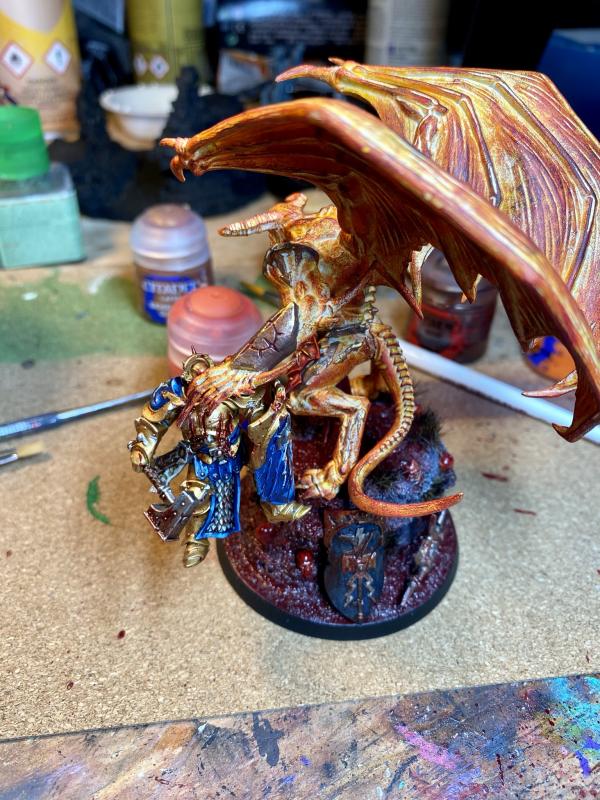 My overall thoughts on the model is that it looks... well... ok, I guess? The technique I used for the flame is ridiculously easy and fast, but it's rather sloppy and best used for banging out decent looking horde models super quickly rather than a centerpiece model. I really like how the red armor and Liberator turned out, but the axe I think needs some work. Given that this is still the centerpiece of my army, if I ever get an airbrush I'll be VERY tempted to go back and strip this thing and start all over with the flame effects, or maybe I'll go in and use layering and blending to achieve some cleaner flames. That being said, it's pretty eye catching, and it's not like I'm expecting my first ever warhammer army to be Golden Demon worthy. Overall, I'm satisfied, but thirsty for more.  That'll be it for this post, and as always, if you have any questions, comments, concerns or want to tell me I'm doing it all wrong feel free to comment down below. Until next time Neckbeards!

Blood for the Blood God

Red Armor Bits, Metals and Whatnot: