Hey there Neckbeards! Welcome to the first segment of Painting for Chumps! Today we'll be looking at a quick and easy method to paint up some tabletop standard Ossiarch Bonereapers models.

A while back, while I was yet in my hobby infancy, I was quite the GW fanboy (weren't we all at some point though?), spending much of my time watching as many of Citadel's video guides as I could get my hands on.  It was during this time that I came across this video, a guide on how to make your models look like statues come to life. The Ossiarch Bonereapers had recently come out at the time, and I though they would be the perfect models to try this out on. Fast forward almost half a year later to when I finally got off my laurels and decided to paint some mini's.

Step 1: Building the Models and Bases

Post Petrifex nerf, I decided that a Stalliarch Lords alpha-strike list focused on Kavalos Deathriders would be a fun and somewhat competive list, so for my first OBR purchase I bought some Deathriders accordingly. I built them straight out of the box (no fancy conversions) and removed all the mold-lines etc. However after they were all put together and the plastic glue had cured I viciously attacked them with some nippers to make it seem like parts of the models had cracked off. I focused on parts that would seem to endure the most wear and tear, like pointy bits and armor (specifically the shield) to help sell the statue effect.

For the bases, I loosely followed this video I found to make some lava bases after having no success trying several other methods to replicate lava. While it doesn't look like real life lava, I think it looks cool and really pops on the tabletop. To pull it off, you first need some cork to lay out an area for your model to stand on, I prefer thicker cork as it looks a little more realistic as rock and is easier to build up. I ripped up some cork Hulk-style and superglued it onto the bases making little islands while definitely not covering my hands in superglue like a moron. I then slapped some Stirland Battlemire on top of the cork board to make it a little more realistic as rock and added it all around the cork to serve as the lava. Once I let it all the cure overnight, I started to paint it.

I wanted black, scorched rock, so I primed the whole thing black and drybrushed the cork with a dark grey, than a light grey, then lightly with an off white and boom, volcanic rock. For the lava flow I did a heavy drybrush of white on the lava and the sides of the adjacent cork, this will set up a slight OSL effect and help the red basecoat for the lava go on quicker. I basecoated the lava with red and drybrushed that same red on the sides of the cork next to the lava and followed up drybrushing the lava flow with a more orangey red, orange, yellow, an off white and bright white the farther away from the cork I got (I'll put all the paints I used at the bottom). After that I painted the base rim with a crisp black and the models were ready to be pinned. 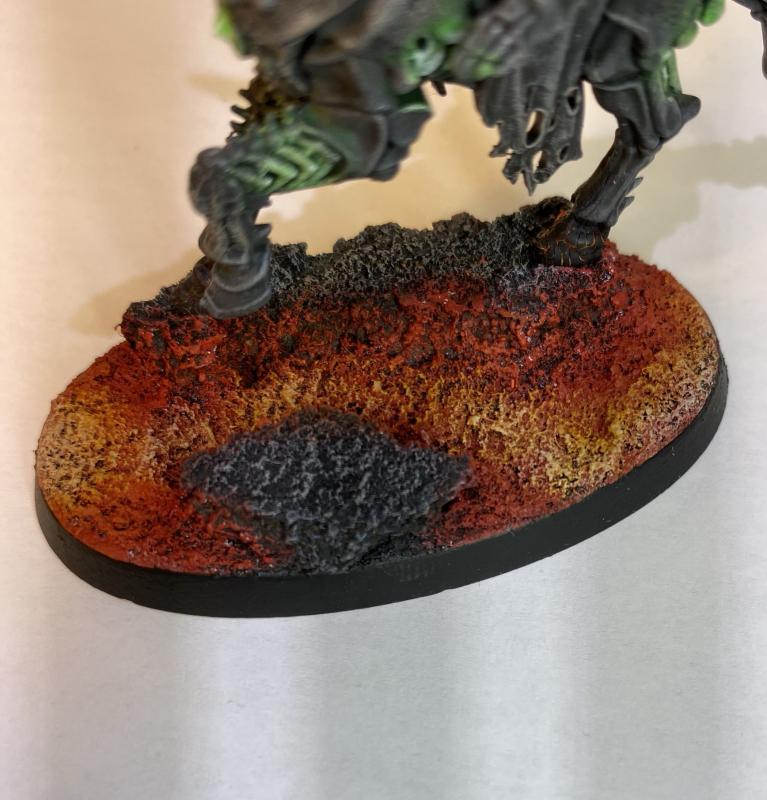 I primed the models (separately from the bases) with Mechanicus Standard Grey, and I wanted it to seem like parts my models were cracking or flaking, so I used one of Citadel's crackle effect paints, in this case Mordant Earth to achieve the effect. To start off with, I first put down a layer of 'Ardcoat on the areas I wanted to apply the crackle effect medium, the smooth finish will allow for bigger and easier cracks.  For the best effect, you want to apply Mordant Earth in one thick coat, the thicker the coat, the bigger the cracks. I then used a hair dryer to both speed up the drying time and get bigger cracks, making sure not to melt the model in the process. Once that was dried, it was time to get on with painting the models.

I decided that the grey primer I used wasn't dark enough and the Mordant Earth bits were straight black which looked stupid, so I basecoated the entire model in a dark grey. Once that was done I applied an all over wash of Nuln Oil. These are the two most tedious steps in this process, but they still don't take very long. I then applied a selective wash of Agrax Earthshade onto bits of the model that I wanted to have a different feel. In this case I shaded armor, bits with the crackle effect paint and the cloth/leather to mix up the model a little bit and make it more visually interesting. Once that was a done, I began layering up some contrast with drybrushing.

I began with an all over drybrush of a lighter gray tone, and then used Rakarth flesh for a selective drybrush of the bits I shaded in Agrax Earthshade previously. I then got out an off white and again drybrushed the Agrax Earthshaded bits and the pointiest parts of the model. Once that's all finished, the stone for the model is done, and it was time to go for some OSL.

Step 3: OSL and Wishing I Had an Airbrush

For the spooky green OSL, I began by basecoating the sources of light and the areas surrounding it in white. For pure sources of light like the spear blades, gems and eyes, I gave them a pure white base, but to protect my sanity I gave the other glowy bits (the skulls trapped in the horses) and the surrounding areas a heavy drybrush/stippling of white. Once that was done I hit the white spots and a little bit of the surrounding areas with a roughly 2:1 mix of Warpstone Glow and Hexwraith flame. Once that had dried, I came back in with some traditional layering and highlighted the sources of the light in bright white while also trying not to think about how easy and cool looking this would be with an airbrush. Anyway, once that was complete, the models were finished! 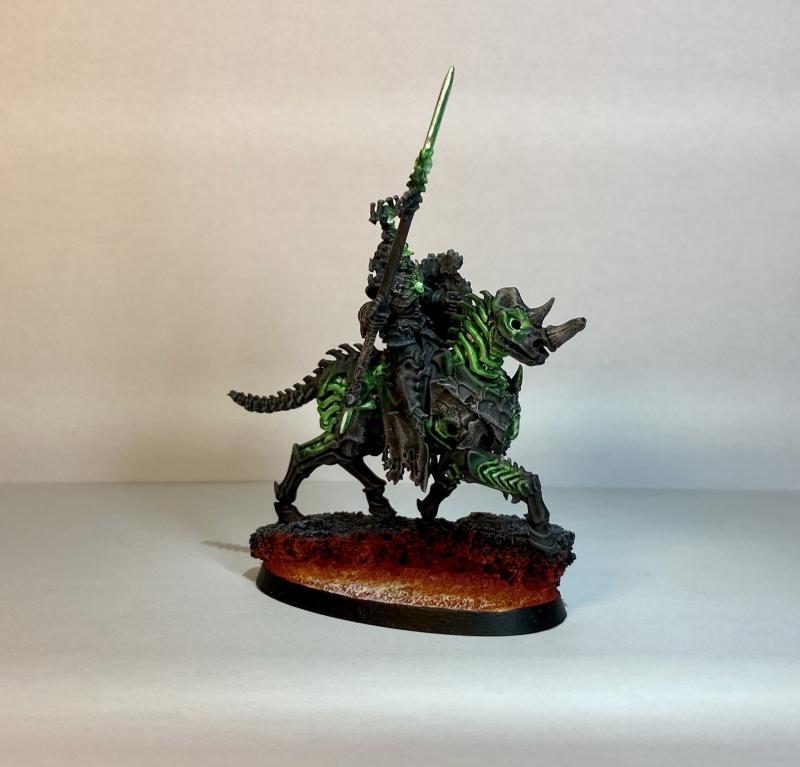 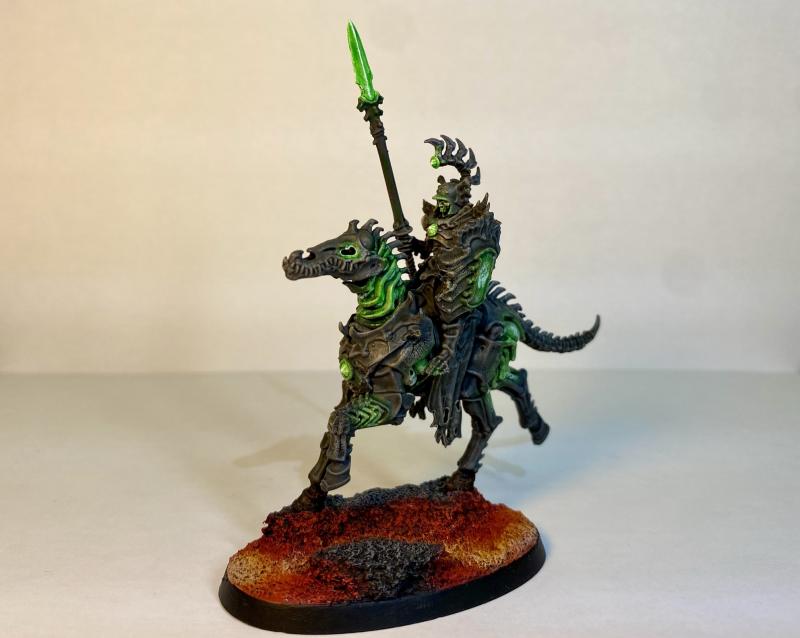 This was my first time trying out this method, and I'll be sure to make improvements in the future. This isn't Golden Demon worthy, but I think it looks pretty good given how little time it takes to pull this off. For my next steps, I've still got a Mortisan Boneshaper I need to paint, and I'm interested to see if I can take this method to the next level by devoting a little more time and implementing some more advanced and daring methods (i.e. wetblending and maybe some freehanding) so stay tuned, I'll likely make an update post in the coming weeks. Well that's it for this post, if you have any questions, comments, concerns or want to tell me I'm doing it all wrong feel free to comment down below. Until next time Neckbeards!