Nothing much going on here aside from him giving me about 5 FP and sending out Geminids. I made sure all my Wizards would be out of range, but the Kairics on the right were wiped out in shooting from the 3 Salamanders that teleported.

My turn has the Terradons brought down to 4 remaining while the Salamanders get taken down to 1 (well, 4 models with Skinks). Miscellaneous Skink deaths in the middle and right via shooting. 10 Blues go down on the right to replace the Kairics and continue to try and zone out any teleporting\deepstriking with his 1 unit in reserve. 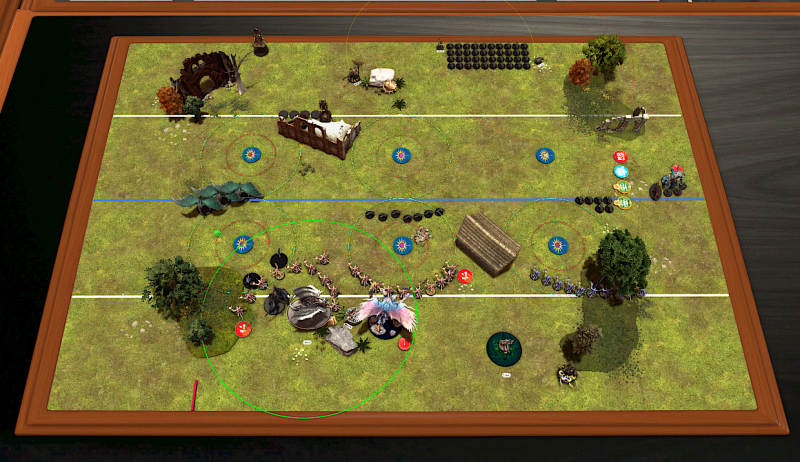 I Dark Master his 40 block of Skinks who get no buffs and sit still. Geminids only manage to kill 1 Pink while I kill 3 Saurus Guard and 1 Terradon with Daemonrift.. which he then Dispells. Luckily I unbound pretty much everything but Comets Calls from Kroak which only did 2 to Kairos. He summons 10 Skinks middle but combat is mostly a slap-fast and his Salamander couldn't finish off the Chaos Spawn, which hit him for 2 more wounds.

I kill all but 1 Terradon and 1 of his original 10 Skink unit in the middle and get Daemonrift out to finish off the Saurus Guard.. Kroak only takes 1 out of 5 MW's from it and manages to unbind Gift. I get enough FP to run the Magister middle-right and summon 10 more Blues, but they fail the charge into the Starpriest\Priest. Middle Pinks complete their agenda to count as double models on the back-middle objective. 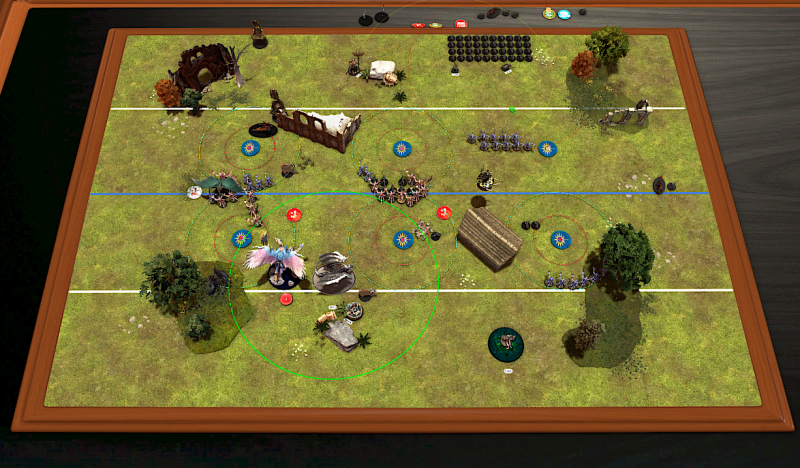 T3He wins priority, I take bottom-right off the board to force the 40 Skinks middle.

As expected, he buffs up the 40 Skinks but I manage to unbind pretty much every else except Comets Call again, which brings Kairos down to 5 wounds taken. He teleports the Starmaster to the bottom left corner and summons 10 Skinks (who fail their charge) while 10 from reserves drop top-left. The 40 block makes it charge and I severely screwed up by forgetting to change a charge roll dice via Kairos.. they manage to kill 39 Horrors out of the middle unit and reduce the Blues to the right down to 4 Brims after BS. Luckily, I had a CP to save the middle unit.

This was an absolutely horrific turn for spells and I didn't even manage to get more than a 3-4 off thanks to Kroaks unbinds and I only do 1 to him via Gifts now d6 damage. No Blues, but I do get 3 Pinks via Fold Reality which was crucial. The Changecaster has done nothing so far, which is my own fault for leaving him out in no-man's land devoid of RR's. Right Blues move left and make an 11" charge into the 1 Skink bottom-middle while the left unit of Horrors (now back to full from 1's on BS) spread out and charge the top Skinks. This was another error where I should have just ignored the top unit as I could've kept the objective no matter what.. this would've allowed me to properly zone out bottom-left from being scored. Combat has middle Horrors get taken down to 11 again after the Sorcerer Lord kills ~11-12 Super-Skinks. 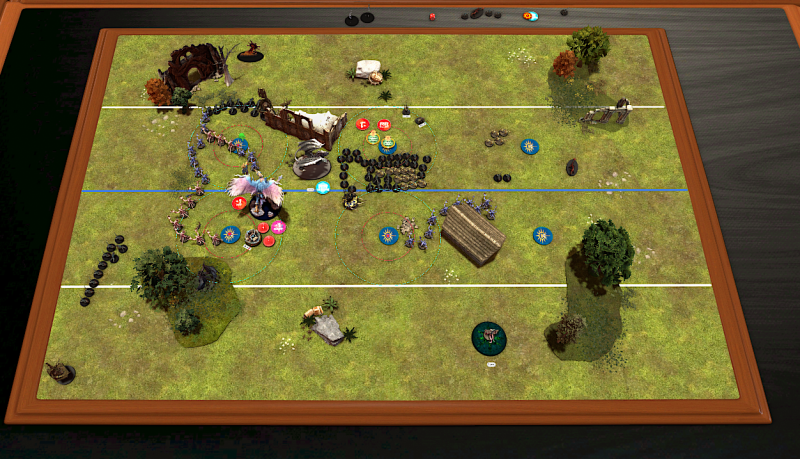 This was a turning point for me finally. Winds of Chaos kills 12 Super-Skinks and I manage to kill Kroak with Gift. Magister runs into his backline and summons 10 Blues who shoot off the Priest. Be'lakor charges the Starmaster, roll 4 hits and... then 4 rolls of 1 to wound while it had only 1 wound remaining. That ended up being a slight turning point for my opponent.

With the Starmaster still alive, he summons 10 more Skinks to the right behind Be'lakor and 10 more above him. The 7 from top-left teleport to bottom middle and make the charge into the Blue Scribes while 1 of the summoned Skink units gets into the Horrors. I was just able to pile in 2 brims into range of bottom-middle objective and that combined with the Scribes killing 3 and ensuring I keep control of it. With him failing the charge with the other summoned unit, it was also impossible for him to gain control of bottom-left as well.

Be'lakor kills the Starmaster who fails to resurrect, and my opponent concedes as there is no way for him to beat me on points even with a double-turn. 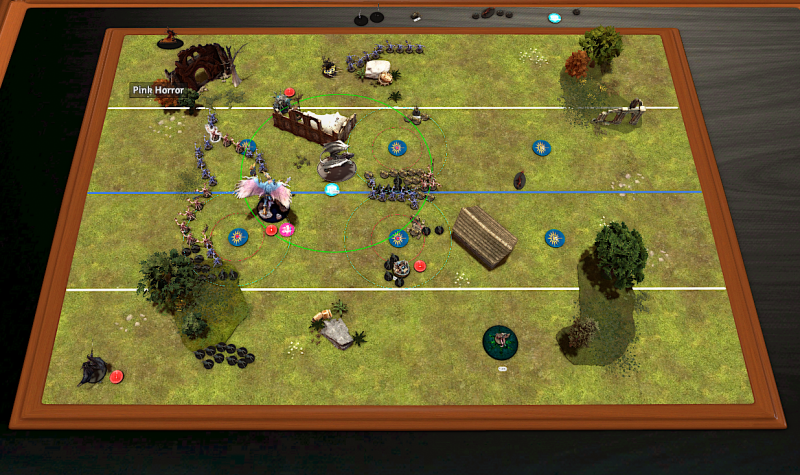 Overall ThoughtsThis was the closest, most intensely focused game of AoS I've had in my almost 4 years of playing... and it was long. Both of us made some mistake, me in particular with forgetting to charge the charge roll of the 40 Skinks which would've potentially ended the game quicker had I not let them get into those Horrors. All in all though I couldn't have asked for a better opponent.. but I know both of our brains were fried after that one 😅

Now that I've played ~7+ games with this list, I'm starting to think about some changes. I think having the 2 units of Pinks is crucial, as the lists I've done with only 30 Kairics made me feel barebones. I have to stick with Hosts Duplicitous for those RR's and I dropping to 5 Wizards is probably out of the question, although taking Cogs could make up for it. To be honest, I think the Magister and the Changecaster are both on the chopping block but I haven't decided if I want to drop 1 or both for something else. While I love the Changecaster, I have a feeling the Balewind will be disappearing soon so I'm considering losing him now in favor of the Changeling. This will give me a double-caster who can hand out -1 to hit on something and has the ability to make some horrors -2 to hit. I've also really considered the Ogroid so Kairos can throw out his easier-to-cast-than-Pink-Fire d6 MW spell and heal if needed.

Anyway, lots to think about but for now I'll take a break for a couple days after that game. As always I appreciate any comments and all the follows\likes\views you all give.