A curious thing happened last weekend. For the first time (ever?) I finally finished painting every single model in a Warhammer army. Usually as hobbyists, we end up buying a little too much, so even if we're happy with the state of our 2000 point army, we inevitably have a few extra models (or maybe a lot extra) that end up sitting in a box somewhere and never finished.

So this is a real sense of accomplishment to have finally painted every single model I own for my Flesh-Eater Courts army. And of course, nothing else is more appropriate than taking some family photos of the army in their completed glory. 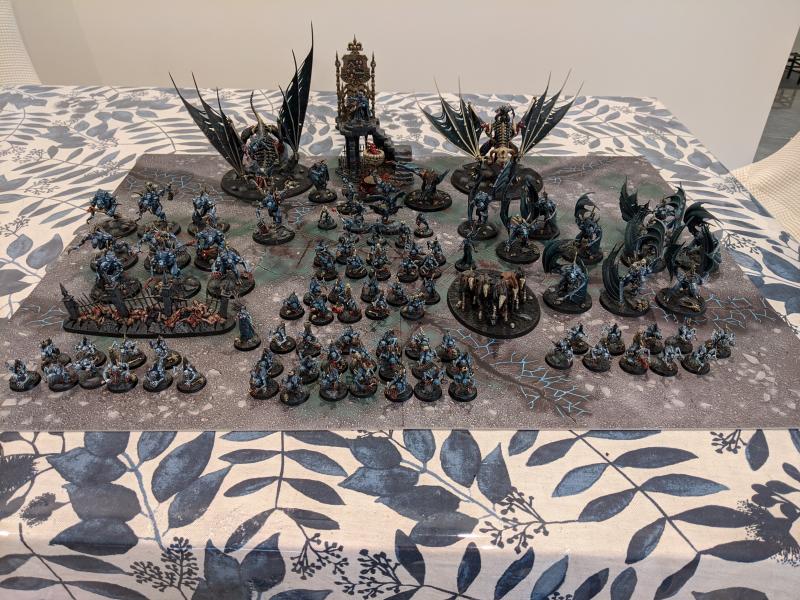 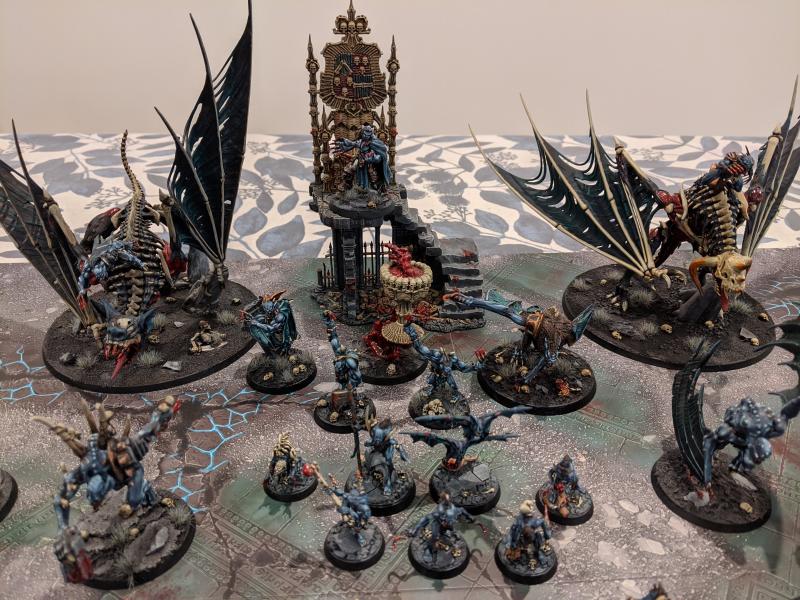 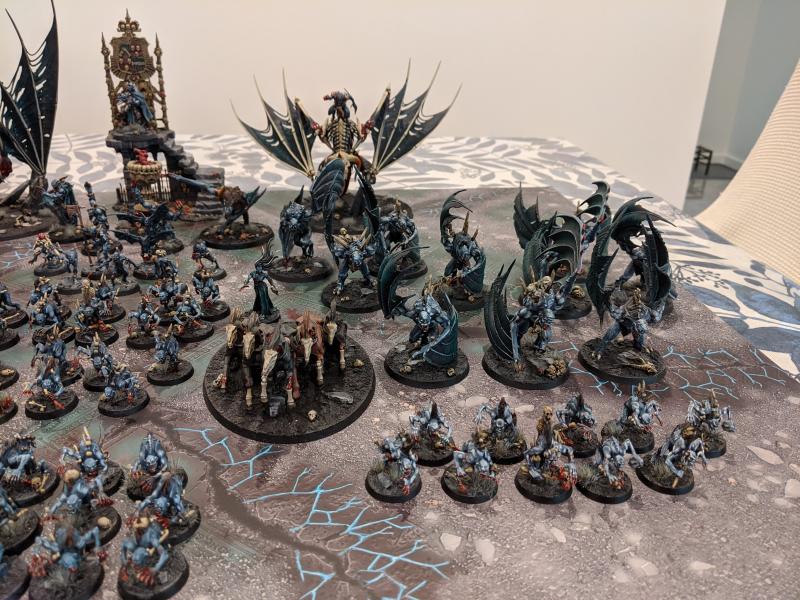 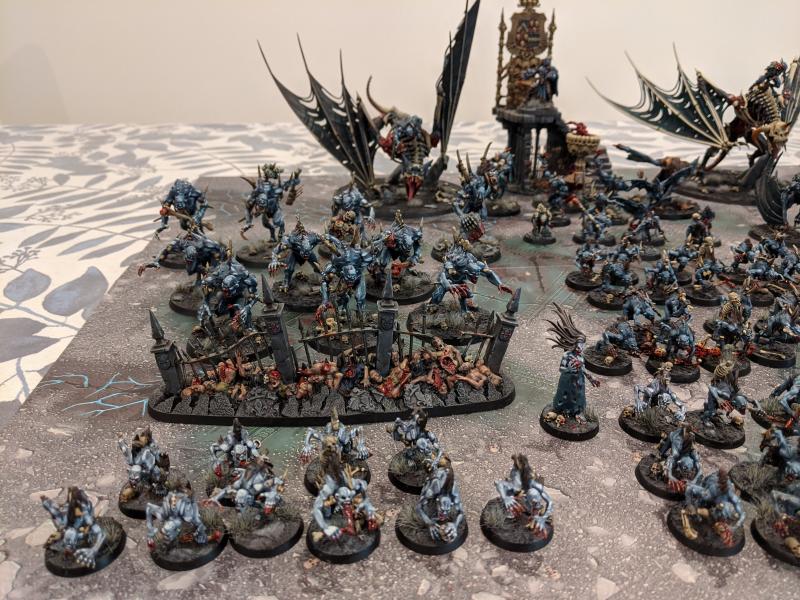 The army in all it's glory. I tallied up all the units, and it clocks in at just under 4000 points before battalions. I am very satisfied with the contents of the army, I won't be able to run any list that spams a singular unit, but it's very balanced in the models in the army and looks exactly how I think an army should do on the tabletop. Lots of little guys, fewer of the big guys, and even fewer of the real big guys! 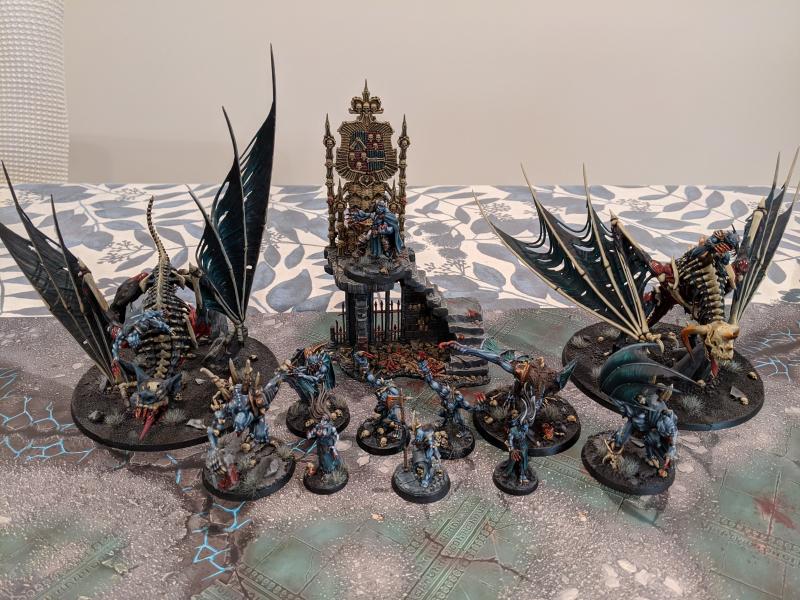 The royal family. Other than Duke Crakmarrow, every single character in the army is converted in some way. Certainly one of my objectives for the army was to make more interesting versions of the Courtiers than the slightly different build (or specific build) you get in the box. 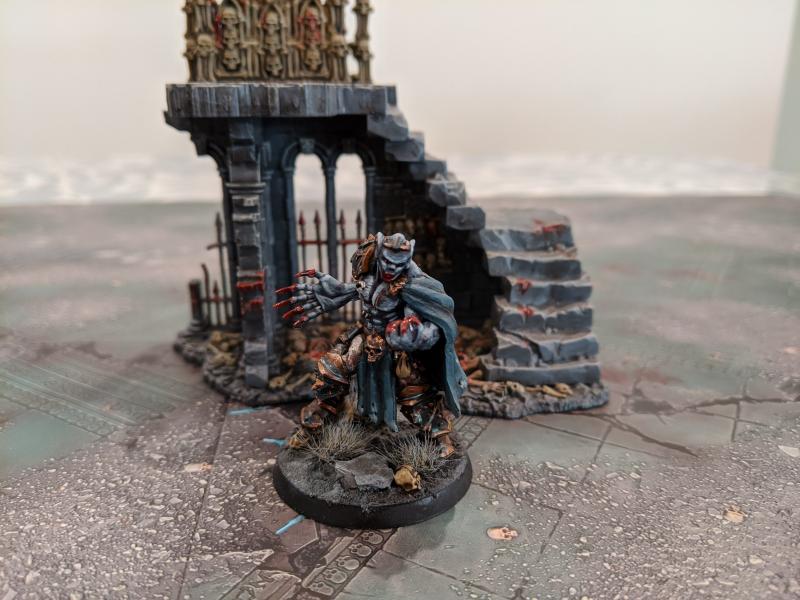 This is the model that started the entire army. I had seen a conversion in White Dwarf where someone had converted the free Slaughterpriest from White Dwarf into a Vampire Lord. I thought it looked amazing, but could go a step further in the 'Vampire-ness' by adding things like the cloak. At one point, he was indeed going to become a regular Vampire Lord, but back when I was starting this army late 2017, I was cautious about starting another 'non-battletome' army (I had already collected Slaves to Darkness and Free Peoples at this point as my main Age of Sigmar armies - little did I know Legions of Nagash was around the corner), and for Vampires I also wasn't going to be happy spending a small fortune on Blood Knights. Converting Dragon Princes for Blood Knights was also a bit more than I wanted to chew in terms of conversions of the army. So Flesh-Eater Courts it was, and I ended up being happy with the enlarged look of the Crypt Horror hand on the model. 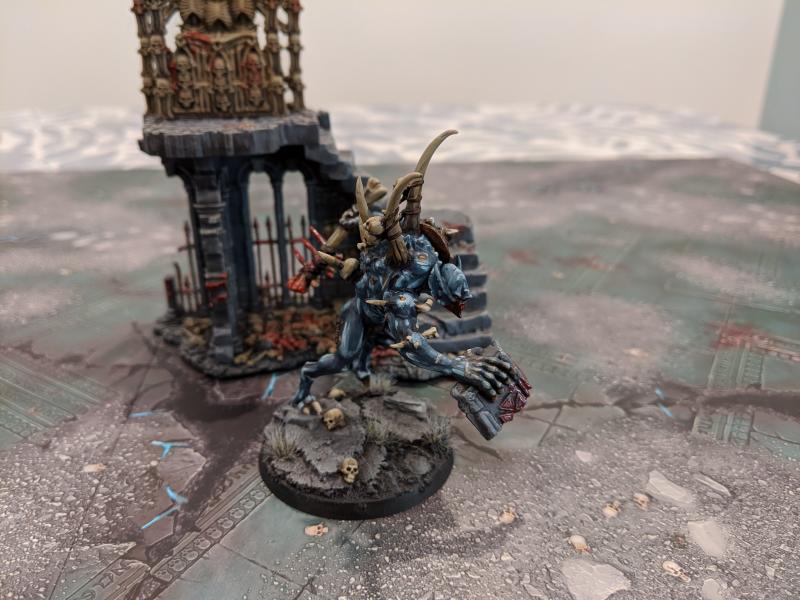 This guy right here is my favourite model in the entire army. As mentioned, I really wanted the Courtiers to stand out and I think this guy aces it. From the modified pose where he's running along with weapon in one hand and a slab of masonry in the other, to the bulky spiked shoulder pad, to finally the spikes from the Zombie Dragon kit jutting out of his back, it all just works really well together. 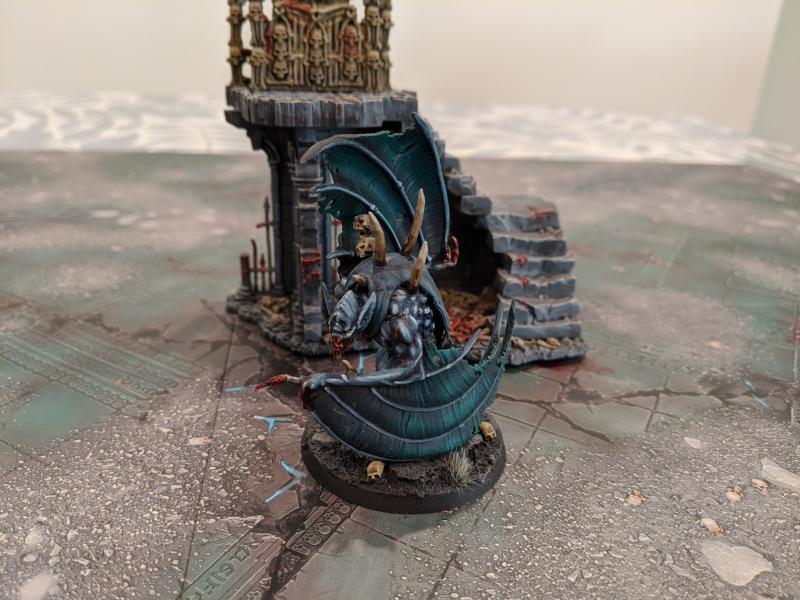 This guy is my least favourite model in the army. He has the opposite problem, he doesn't stand out. The cape he has just kinda blends in due to the wings, and his spikes aren't even as impressive as the ones on the regular Crypt Infernal models in my army. It just didn't really work out with this guy, and in the end I whacked a regular Vargheist head on just to make him stand out a little. If I had an extra model, this is the one guy in the entire army I'd redo. 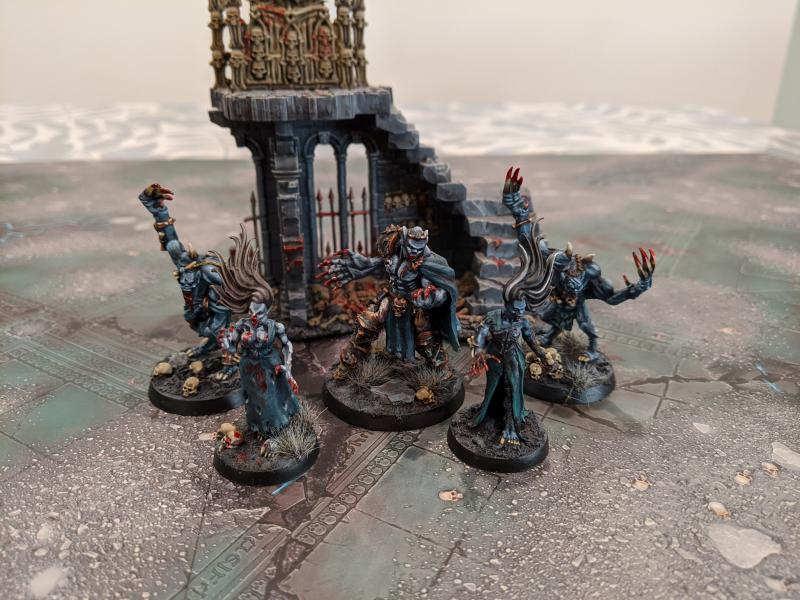 For the Crypt Ghast Courtiers, I have had some Daemonette bits lying around for ages now. Obviously I didn't want to break up a box of Ghouls to make a Courtier and be left with 9 models, so I figured I could convert the Ghast Courtiers out of Daemonettes. In hindsight, I wouldn't have used the heads with the spectral hair as what has happened in the past is that people have confused a Ghast Courtier as a Tomb Banshee. Overall I'm pretty happy with the conversions. The 2nd one (the one on the right) which was completed much more recently, I did consider having a more hunched over look more akin to Valreek from the Grymwatch, but didn't feel like I was going to pull it off.

Funnily enough, the second one (which I'm a bit happier with the dress on) did get me thinking about perhaps a small unit of Daemonettes (maybe Warcry) in dresses could be cool unit to make.

The Ghoul Kings are the old Strigoi Vampire models. I had picked some up a while ago in a buy of a bunch of metal models and didn't really remember about them until I was perusing through my boxes more recently and thought I may as well use them. Better to have some dedicated foot models in case I wanted to use both the Kings on Foot and mounted. I only had a head for one of the models (and it's fairly enormous), so I ended up just putting on Ghoul Heads with some minor green stuff work. 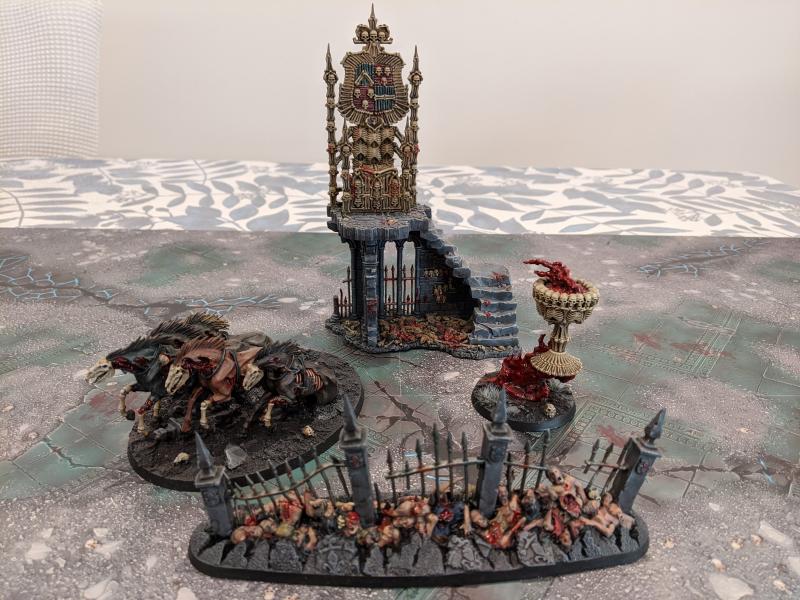 Lastly the Throne + Endless spells. I think these were probably some of the most enjoyable things in the army to paint. The throne in particular is a lot of stone, a lot of bone, a lot of drybrushing and a lot of blood.

And that's a wrap. The entire army is painted, and most of it is based. I just need to track down some more tufts of a certain kind to finish off about 30 models in the army, and then it's complete, for now?

I think I probably have enough appetite with the army to paint one more start collecting box if it came down to it. When I built the Zombie Dragon, I definitely tossed up whether or not just to build a second Terrorgheist as I felt it'd be more useful, but wanted the Zombie Dragon to 'complete' the army. So we'll see, but it's definitely time to be starting a new painting adventure.