The Wellington Warlord's annual gaming event Call To Arms is this weekend, and they were kind enough to let us run Warhammer as one of the events on offer. We ended up with 11 entrants (plus one ringer player), and it has been great to meet with all the new players (over the internet so far, but in person this weekend) and share in their enthusiasm in the build-up to this event.

This will be the first event in New Zealand to use the General's Handbook matched play guidelines.

I have been working to finish the last of my Deathrattle Legion of Death, who will be overseen by the Supreme Lord of the Undead Himself: 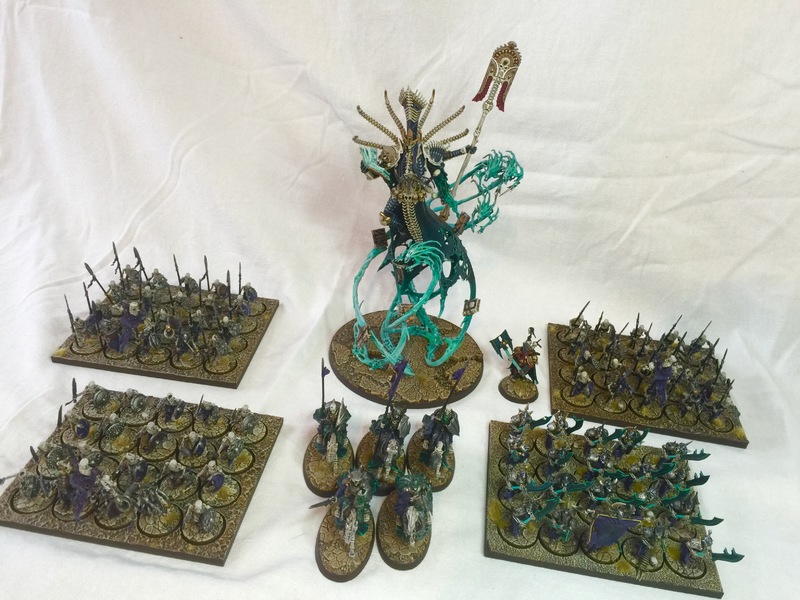 The first round draw has been made, so I will list those here along with the army lists, and talk a little bit about each.

Campbell's list has a mix of old and new, mixing Freeguild (along with some familiar faces from the World-That-Was) with some Stormcast Battleline units. I think it will rely on the General and Steam Tank to get the job done, while the Greatswords and Stormcast will be the objective holders. Gelt and Huss are not strong choices here, but I will be interested to see how they do perform over the weekend.

James has a pretty hard list. He took Tomb Kings with great success at NICON, and has opted on two main combos at CTA; one that boosts the effectiveness of the Necropolis Knights, making them fast and very killy, and one that debuffs bravery via the Screaming Skull Catapults in order to make the Terrorgheist attacks more effective. The chariots have great regeneration, so he also has some objective holders. It's going to be a tough one to go against. The only weakness that I can see comes if we can somehow get Jimmy to kneel down during his games...

Nathan is the ringer player, so we don't have his list. He is very kindly supplying a TON of awesome terrain, which we are all excited to play on. Thanks Nath!

Nick's army focuses around a core of Scourge Privateers. The Warscroll Battalion will allow him some extra flexibility with bonus movement. Nick will be well served by a solid infantry list if he keeps his eye on the scenario objectives, but it remains to be seen how he will cope with larger monsters. The lone Grimwrath Berzerker (a prisoner, we assume) is a good dark horse choice, as they always do more damage and stay around longer than you might think.

A good old-fashioned Ogor-Off. Matthew is able to take the brand new Beastclaw Raiders allegiance, giving him the smallest army in the field at nine models. This army will be all about charging in and dealing mortal wounds up front. He may struggle with objectives, but that doesn't matter because this is one of those good old balls-to-the-wall table-or-be-tabled lists, and is going to be good fun to go up against.

His opponent Fraser has a more traditional Gutbuster list, with a core of infantry along with some shooting from the Ironblaster. A solid, all-rounder that should do well if he focuses on objectives.

I'm kind of scared of Alistair's list. The Moonclan are popular with players in AOS, and this guy has all the Forge World toys - Troll Hag, Colossal Squig, and even old Skarsnik! There is so much potential damage output here, I am going to have to rely on Nagash pulling his weight from a distance if possible, as I don't trust Alistair to not take him out in one turn. A solid battleline with the insane (damage-wise as well as mental health-wise) Fanatics to think my ranks. Whatever happens, it will be a blast.

With my list, I took the Legion of Death Warscroll Battalion and Nagash, giving me just two deployment drops, so I should be able to have the choice of the turn order in all my games. I should be able to weather most of what people throw at my battleline, which are no slouches in the damage department either (the Grave Guard are seriously dangerous), but Nagash himself can take out half an army if he needs to. I am somewhat conservative with him though, as I have lost him in one turn before, but if I can keep him alive and score the objectives, his point cost alone should allow me to win any tie-breaks. 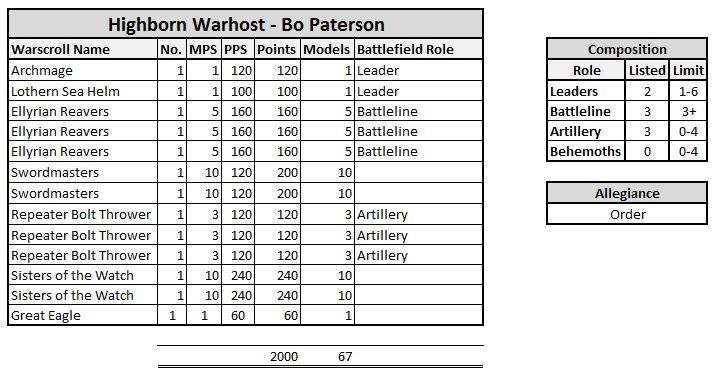 Bo's list is going to be a good test to the notion that shooting-based armies are OP in Warhammer: Age of Sigmar. The Ellyrian Reavers being battleline units is quite beneficial, as they have excellent manoeuvrability, and can pump out shooting attacks as well. Great for getting to and sittin on objectives. Three bolt throwers... my goodness. Again, nothing stopping Bo from dropping these on objectives. Swordmasters are going to do some damage in combat, but success against this list will be determined by other armies ability to get across the board and wipe units out. Easier for some than others!

Brendan is taking the brand new Sylvaneth units, and I'm keen to see how they perform. The Warscroll Battalions add a bit more survivability to the Treelords, and allow some of the Dryads to recycle back onto the table, which will be great for objectives. Hopefully Brendan also has a heap of Sylvaneth Wyldwoods to cover the table with, as these will help create tactical advantages such as dangerous ground for his opponent, and unit teleportation for himself. A good chance at doing well against tough lists due to this flexibility.

Luke is sporting another Moonclan list, and this one is focused on covering the table in grots. The larges model count by far at 145 models, it also has some fantastic damage dealers in the Mangler Squigs and the Fanatics. Hopefully the weight of numbers will be enough to survive on the objectives.

Shaun has a Freeguild list that I really like. No less than three wizard-wagons, and two more wizards on foot, supported by infantry for objectives. That could equate to some serious magical damage output. The wizards on foot allow Shaun to choose a different spell lore for each at the start of each game, giving him some flexibility against his opponents.

As you can see there are some really interesting list out and about at Call To Arms, and I'm really looking forward to the aftermath.

The entrants at this event will also be the first to be able to enter the national scoreboard, and more details will be forthcoming after the event.

It is still not too late to enter the event as a last-minute entry, so please get in touch if you would like to participate. If not, and you are in the area, please come in and say hello!