What 1k point army should I paint up for Arkhan to lead first?

So I want to paint up a 1,000 point starter army for Arkhan to lead, but Arkhan can be used in a lot of armies - Bonereapers, Legions, and Grand Alliance Death.  Plus in Tomb Kings armies 'Arkhan on a Chariot' has officially been run as Settra or 'Tomb King on Exalted Chariot' since the Compendium days, so there's yet another way to run him.  And my shame pile is sufficiently massive that I could easily put together any of these lists, and honestly I like all of them, and hope one day to paint all this junk, so the question is less 'which will I try to paint' and more 'which will I try to paint first', which I guess I'll throw up a pole for here and see if anyone has suggestions for me.

Here are the options I'm looking at right now: 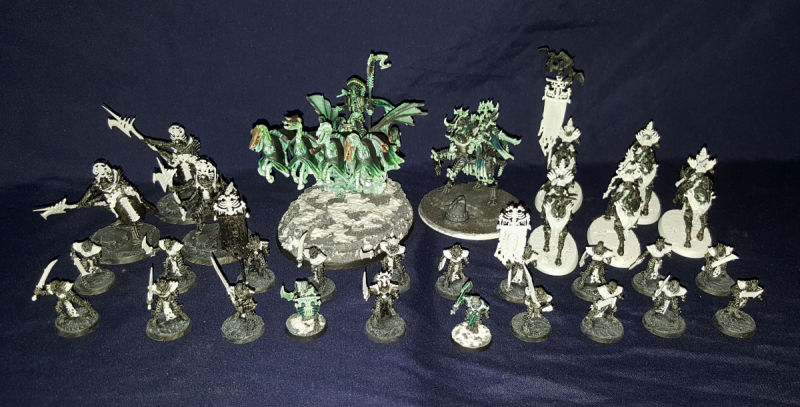 Sadly, I missed out on the short window when Arkhan was actually kind of good using the petrifex elite rules.  On the up side, though, the nerfing of the elite means I can run Arkhan's personal Ossiarch Legion and not feel like I'm missing out.  Even without the benefit of Petrifex, this is still probably the most functional option, not that tabletop functionality is a big concern right now.  Another mark in their favor is that they have the correct round bases, something my oldhammer models don't - and won't - have.

The immortis look cool and will probably be easier to paint, even though there's more of them and the liege is further along, and with their help arkhan might even survive past the first turn.  On the other hand the liege would be a lot stronger for the army, significantly buffing the morteks and/or riders and adding another fast element, plus the liege could be the general so when Arkhan inevitably bites it I might still have a fighting chance.  If anyone votes for ossiarchs, let me know which option you prefer here. 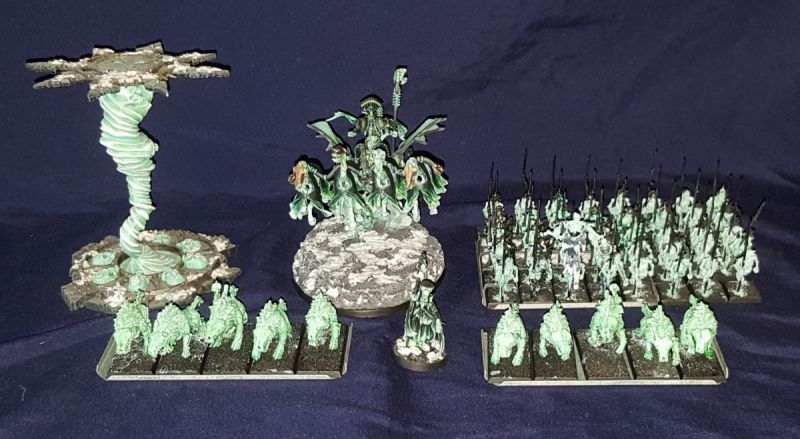 Speaking of fielding weaker armies for the narrative value, not only is Arkhan not so great in Legions these days due to his war scroll being rewritten to specifically fit better with the Ossiarchs, but even within the Legions he's much better off in Grand Host, where he doesn't have to be your general, so you can get an actual command ability and don't lose the 'endless legions' command ability when he inevitably bites it, but it's not like I'm actually playing games in the time of covid, so if I'm going to put together a Legions list for Arkhan it might as well be /his/ Legion.  Since most of my previous failed attempts to get a starter list together were Legions of Nagash based, I've got a fair head start painting these guys.  But this is also the most numerous list in terms of bodies, so it probably wouldn't be any faster to finish anyway.

As mentioned, the units are all on square bases.  I had the energy to rebase  most of my oldhammer heroes and monsters, but not the units themselves, and with the Old World game on the way I'm not about to start any time soon.  If I go with these or the tomb kings, I might get some of the roundish base addapters that clip to square bases, though.

Old school undead chariots to go with old school Arkhan.  From what I can tell, Tomb Kings aren't even legal in Pitched Battle 2020 without advanced consent from your opponent, and the rules are quite wonky, as they were never updated for 2nd edition  Even so, there's a kind of bragging rights that comes with running a Tomb King army these days, like that's just not something most gaming stores see every day, and I find that appealing.  And my collection was put together specifically to blend VC and TK themes - I have old plastic tomb king shields for my skeleton spearmen, and have converted VC style skeleton crew to pilot the chairots and so on, and there's a level on which Old School Arkhan just /feels right/ in a tomb kings army.

Since Tomb Kings have to run using the generic Grand Alliance Death rules, I can run Arkhan as either an Exalted Chariot or as himself.  If I run him as himself, that makes room enough for an extra tomb king on foot, something that didn't occur to me until after taking the above picture.  If you vote for Tomb Kings, let me know which variant you think I should go with.

So those are the three options I'm looking at, and really I do like all of them equally, I think, and if I can sustain the effort I'd probably try to get all three done before expanding any one army out towards the standard 2k range.   But that's putting the cart way before the horse, I have to get at least one of these three done before I worry about what I'll do after, so which one do you think I should start with?