T1
As usual, going off memory so I don't take up time by note-taking, IE things may be a bit wrong but the ending score is correct. Also, yeah.. I need to take a picture at the end of each round instead of just "whenever I remember to take one". I win on drops and allow him to take T1.

Boring T1 as expected; he moves everything forward and buffs up the right unit of Skeletons.

On my turn, I largely do the same but don't bother with MMMWP and Death Frenzy fails to go off on a 3. I do as much as I can to negate the 2x10 Hexwraiths he has waiting in deepstrike. The Jezzails shoot off the right-side Necromancer. 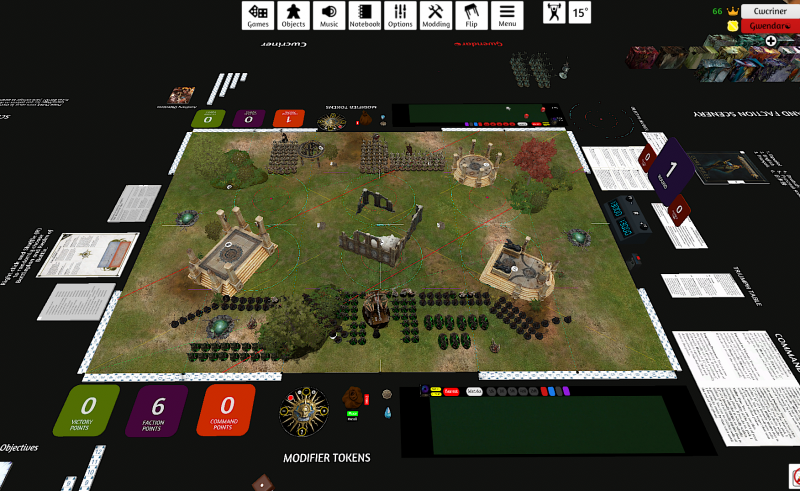 T2
I win the roll off, but allow him to go first. For this new battleplan, whoever is going second get's to remove an objective, so I removed his central objective to coax that unit of Skeletons forward into my Stormvermin.

He wades forward a bit, but fails to get off any spells aside from Mystic Shield on the Vampire Lord. He brings the Hexwraiths in on both sides (would've been nice if I took a picture to show that, eh?) but only the left side manages to charge into the 40 Clanrats. Combat has ~8-10 Clanrats die and they swing back to kill 2.

My turn, Acolytes get MMMWP but I fail Death Frenzy again on a 5. I retreat the left Clanrats out  and charge back in to make sure only 2 of the Hexwraiths can actually get in combat. The Jezzails shuffle to the left while the SV shuffle up a bit more but try to stay out of charge range of the middle skeletons in case he get's priority. The Acolytes shoot into the 40 Skeletons to the left and do around ~41 wounds, killing all of them while the Jezzails shoot off ~2 more Hexwraiths. 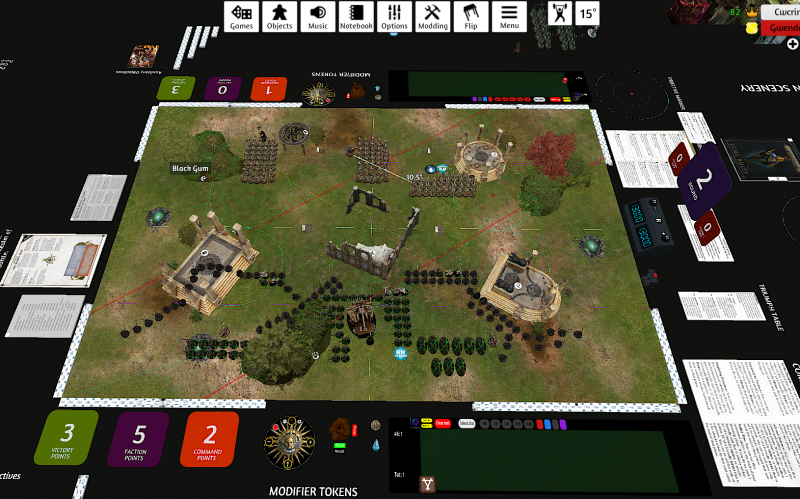 T3
I win the roll off again via tie and decide to take it. He removes my central objective.

I don't bother with MMMWP but I fail Death Frenzy again.. however I can't wait another turn to get the SV into combat and the Skeletons may charge them anyway. Left Clanrats retreat and I get 1 onto his left objective. I don't buff the Acolytes with Deranged Inventor so they only manage to shoot off 2 more Hexwraiths while I instead give it to the Jezzails who take out the left side Necromancer and 2 more Hexwraiths after shuffling to the left some more.  I get the SV within 6" of the middle Skeletons and make a 10" charge to get ~24 into combat with them while the left Clanrats charge back into the remaining 2 Hexwraiths to keep them getting to my Acolytes. Combat has the SV kill all 40 of the Skeletons but they just barely miss killing the Vampire Lord who has 1 remaining wound.

For his turn, he fails his spells again but he brings back the left unit of Skeletons on the same side. The right Skeletons and Hexwraiths charge the 40 Clanrats while the Knight of Shrouds charges into the left Clanrats. Only ~4 Clanrats die on the left and I lose 14 from the right but use my 1 CP to negate BS.

Middle of my T3 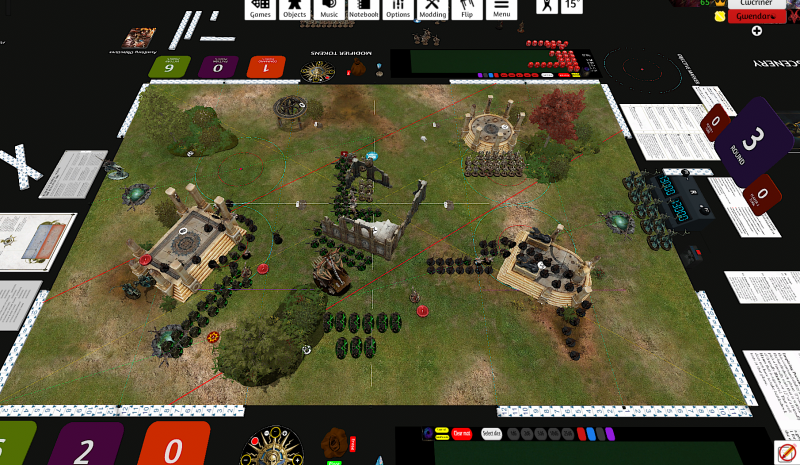 T4
I win the roll off via tie again and take it. He removes my left objective.

Death Frenzy finally decides to go off but I don't bother with MMMWP again. Shuffle the Acolytes and Jezzails up a bit and get the SV within a 7" charge of the right Skeletons, meanwhile both Clanrats units retreat and reform (with the left unit running to get 5 on his objective to take it back from him). Acolytes finish off the remaining 2 Hexwraiths while the Jezzails do 10 MW's to the Knights of Shrouds, killing him. The SV roll a 12" charge and I get all but ~10 into combat while the right Clanrats charge the Hexwraights again to put more bodies on my right objective and ensure only 1 Hexwraith can swing into combat. I'm out of range for the +1 attack, but the SV still manage to kill all ~27 Skeletons as well as the Vampire Lord, so he removes the unit as the rest will BS off.

He has no spells left, so he moves the left Skeletons to cover his objective and charges them into the remaining Clanrats while resurrecting another Skeleton unit on the right side, however he fails the charge with them into the SV. Skeletons kill all but 2 Clanrats but the Bell is in range to keep them alive and in combat in case he gets a double turn. 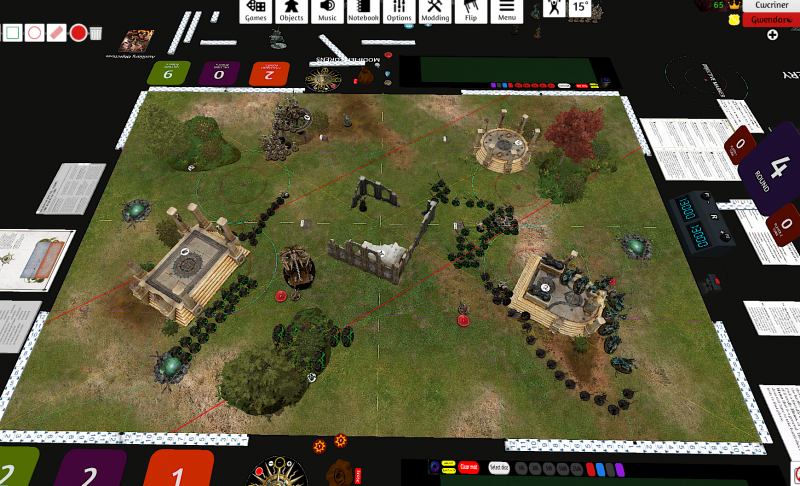 T5
I get the roll off again and take it. He removes my right objective.

MMMWP goes off and I don't bother trying to get DF off on the Acolytes. The Acolytes run up and kill ~half the Skeletons (lots of damage 1 rolls this time) while 5 of the Jezzails (buffed with Deranged Inventor) take the Wight King down to 1 wound remaining; he just barely made the two 6+'s that he needed. I decide to try and charge in the Bell as I have nothing on the left objective and with the remaining Skeletons BSing off the board after combat would end, he calls the game there as I will control it for another 2 points. 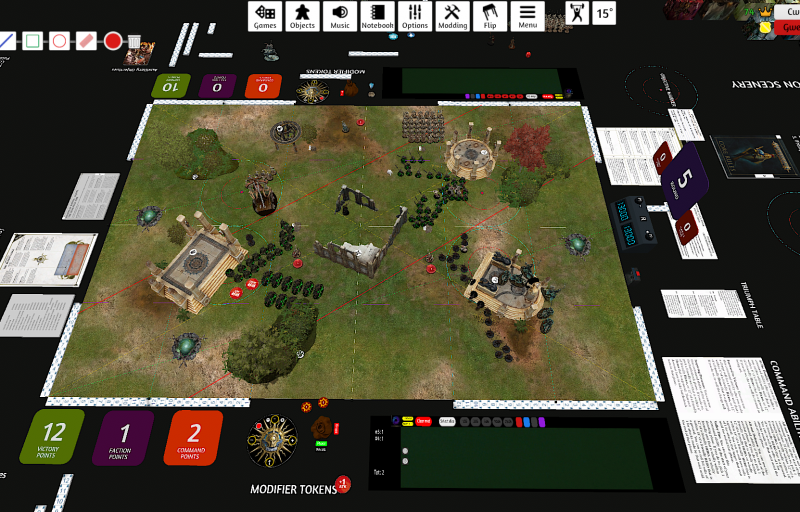 Overall Thoughts
I definitely love this list after my first game with it, but I definitely made deployment errors. The Jezzails had slim pickings for heroes as he made sure he didn't put down his Wight King until after I put the Jezzails down. They were still able to do their job with the 2 Necromancers, but not putting them by the Gnawhole to potentially teleport them or at least have them in range of more heroes hurt me. That said, he told me if I had deployed them there he would've brought down the Hexwraiths T1 anyway to negate that.

The only thing I'm currently iffy about is the Bell.. I haven't used it in probably 8+ months and I can't say I miss it. All it managed to do was roll for the MW's which never did anything at all due to my inability to roll 4+'s; even if I did it wouldn't have mattered against anything but his heroes who were either dead from Jezzails or out of range of it. I know it's meant to be utility and really is just there for the BS, but it seems to have a very difficult time keeping up with the SV who it's mostly for.

Of course, I don't know that I would replace it with anything until I've had my other 2 games, but there isn't anything I would consider replacing it with except for Thanquol. If I dropped at least 1 Bombardier down to an Engineer then I would have enough after taking the Jezzails to 6. That's a tough call for me as 9 ups the consistency factor, but I would have a more reliable Death Frenzy cast as well as more anti-horde, which isn't super needed with Acolytes and SV already in.

Anyway, thanks for reading, I may have another today and tomorrow so check back.