With proof of concept the big question was - What’s Next?

With scheduling issues for one player and still working out logistics for some of our other previously regular players the two of us that could schedule more regular games set out to play an mini-Escalation League between Nurgle and Beastclaw Raiders.  Neither of us had been thrilled by our beta test 1K build so we both went back to the drawing board.  Nurgle proxied in a couple of Plague Drones as Pusgoyles to give their list a little more movement while I swapped my Thundertusk Beastriders for a Huskard on Thundertusk and his Everwinter Prayers. 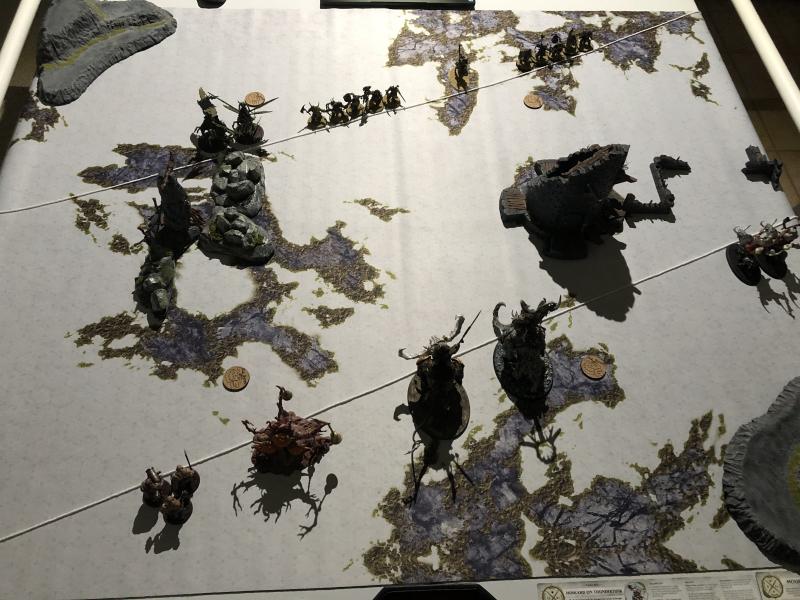 We played GH19 Total Conquest.  Without Rend the PBKs struggled to take down the bigger BCR Monsters but some cold rolling for the Frostlord and the Harbringer of Decay’s Command Ability left stuff a little too jammed up in the middle.  This resulted in a tie on VP as neither  managed a breakthrough, even with Gutrot and the Slime Fleet popping up in the backfield.  BCR took a minor victory by killing off more of Nurgle’s points than they lost.

This stalemate would’ve been discouraging if it had been one of the Beta Tests but it played fast and Nurgle knew with the point jumps they could add in the Blight Cyst Battalion and get the Rend that had been sorely missing in the 1K matches.  And with the points jump for BCR knew I could add some bodies to give me a little more flexibility in maneuvering for objectives.  I’d also be bring a Butcher which meant the Mawpot was now in play. 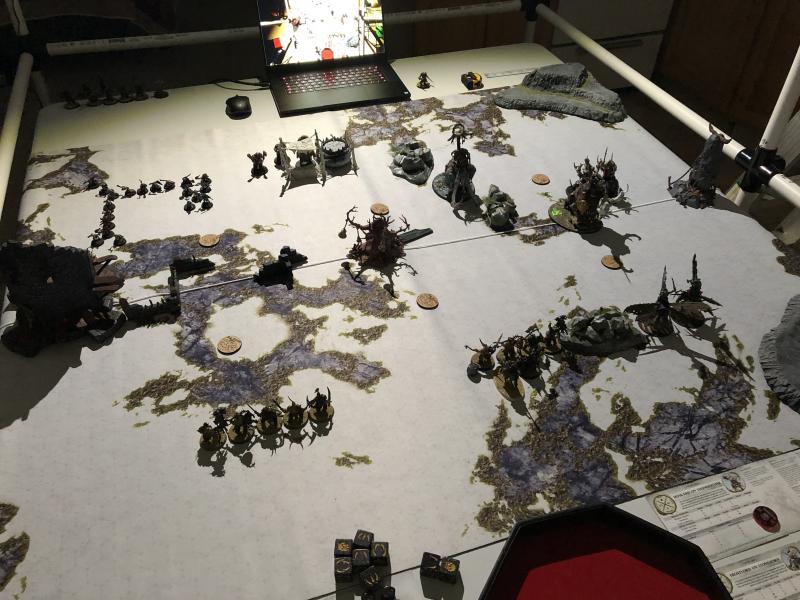 This time we were playing GH20 The Blade’s Edge, which immediately became one of our favorites.  The power of choosing which objectives got removed was potent enough that when Nurgle won priority rolls in later rounds they gave up a double-turn to be able to remove objectives from BCR’s territory.  This was a tactic that proved effective enough to put the game away on VPs even before they knocked most of the Ogor models off the table.  With a major victory Nurgle was now ahead 1-0.5.

With another points increase  though BCR was able to roll out Double Frostlords on Stonehorn as well as a Butcher and a Slaughtermaster.  While Nurgle was able to load up on PBKs and try out Slimux the set-up for GH20 Forcing the Hand made Nurgle separate his big blocks of PBKs with the result that only one group got the Harbringer’s buff. 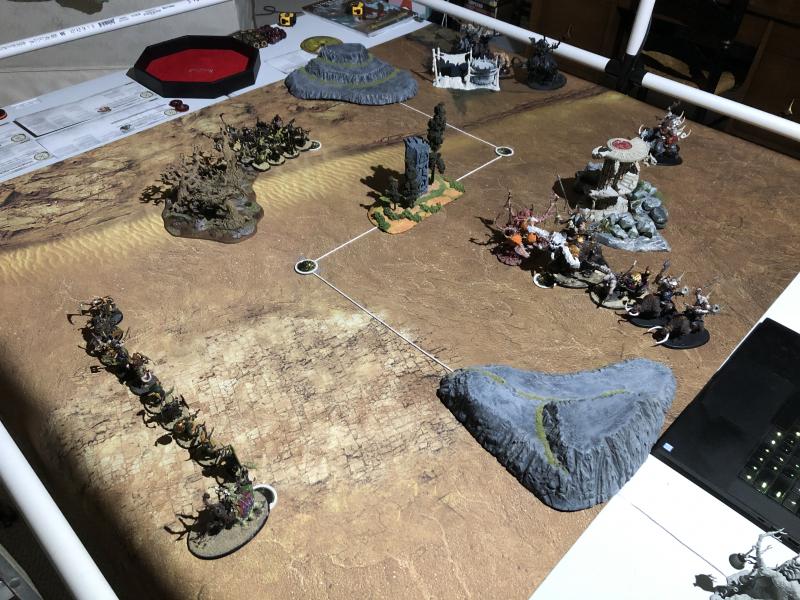 Nurgle’s deployment difficulties were compounded but the Slime Fleet entering from the back corner and then failing their charges which allowed BCR to basically ignore the first few rounds.  Still, despite these advantages for BCR it took some very bad rolls for the Gnarlmaws and the Blessed Sons exploding PBKs (back-to-back ones when all that was needed to take the last wound was a 2+...) and some strong saves and shrugs from the Frostlords to keep them in the game long enough to secure BCR a major victory on VPs.

Hopefully we’ll be able to complete the cycle with games at 1.75K and 2K but the scaling so far highlighted two BIG reasons why the “Zoom Meta” almost necessitates Elite armies/lists.  To start with even at the beginning Elite lists just have fewer models to move.  This is vital given the dynamic of remote players.  But arguably equally or more important is that as points go up damage goes up without being diffused.  Getting every model into combat with a Horde unit is rare so there is often a big differential between the theoretical damage output and the practical reality can be huge.  In contrast typically you’re goin* to get both a Mournfang in and barring creative model removal ALL of a Monster’s attacks almost be definition will be eligible (overkill can be risk).

The net was even though we were starting with more models by rounds 3 or 4 we were still down to the numbers we’d been at in lower pointed round as concentrated firepower was removing models at a faster rate.  And keeping matches at the ~2.5 hour mark is a practical priority for this dynamic.  Again, that is a very different meta than our in-person games where in early games Hordes of Grots were common and even in our more recent games where loads of Khorne mortals were finding their way to the table.  Not that we didn’t have elite armies as well (I was running Gristelgore last year at this time) but, pre-quarantinethe next Army we were expecting was Tzeentch.  So clearly we were adapting to the new conditions.