While scheduling caused a few more delays we eventually lined up two Beta Test games.  Both would be 1K with an emphasis on “the basics”.

The first match was Beastclaw Raiders versus Nurgle. 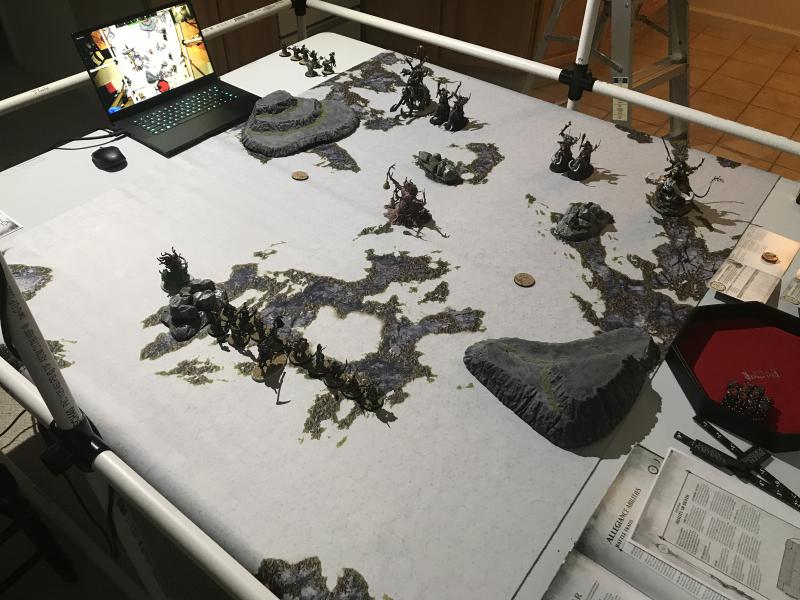 A simple two objective battleplan with minimal terrain did mean this was a bit of a race forward and smash each other in the face style match-up, though Gutrot Spume and the PBKs in the Slime Fleet did add a little flavor.  Mostly what this one did was serve as proof of concept.

Our second match-up was an Execution Herd-centric Legion of Azgorh against BCR but “1st page” of Battletomes and war scrolls only.  (In other words no mount traits or Boulderhead sub-faction abilities but the trample and hungry/eating benefits for the Ogors while LoA got their Blackshard Armor buff...). Same battleplan but played different enough that we had conviction this wasn’t a fluke.

There were two key takeaways though:

1) You Need an ABSOLUTE Direction System

As anyone who has had to say “No, not your right, my right” knows a lot of the basic directions we use on a day-to-day basis can be unintentionally confusing because of the inherent relativeness of the terms.  With the need to shift all around the table to move the models we needed something absolute to go with.  So the top of the screen became North, the bottom South, the right-side of the screen East and the left-side of the screen West.  Wasn’t always perfect (turns out it is as easy to confuse your East from your West as it is your right from your left, especially at the beginning, but after a couple turns everything was Running pretty smoothly.

Especially for the remote player’s movements you need a running dialog about what there intent was?  For example, in trying to pile-in as many models as possible were they intending to activate (put pieces w/in 3” of an enemy model) that initially hadn’t been eligible?  In completing a charge we’re they trying to “tag” both adjacent enemy units or just one of the two?  In other words the in-person player should absolutely NOT be trying to create an advantage for themselves either by commission (i.e. moving an enemy model in a way that benefits them) or omission (i.e. not telling the remote player about a potential advantage or disadvantage that may not be easily evident from the God’s Eye view).

The biggest positive though was that, despite our worries going in (and no doubt helped by the fact that we were only playing 1K), the game played very fast.  We’d been prepared for a lot of slowness but after some initial hiccups turns weren’t taking much longer than they do in-person.  This was a very pleasant surprise as it meant we could increase the points...