Progress continues to be made in clearing the back log of Stormcast from the mortal realms magazine. The next delivery lands any day now so it's all hands to the pump so to speak.

I've pretty much put the base colours on the collection of Castigators I've got. Now the eagle eyed amongst you will have picked up on the fact that by issue 10 (the issue I'm currently up to on deliveries), I should only have 5 Castigators, whereas I have 8. Either way the extra ones dont help too much as the units are taken in multiples of 3 in matched play anyway.

More so I remember going forward the base colours on these are as follows:

Its onto the washes next, which I've already started on the robes using Agrax Earthshade.

These are also the colours used on the Sequitors I completed the other day and I'll make a full list once the Castigators are done. Again, mainly so I don't forget in the future in case I get distracted by some other project!

There's another 2 Castigators to come in a later issue of Mortal Realms (Issue 15?), so if I can get two copies of that I'll have an even 12 Castigators, enough for two units of 6 which appeals to the collector in me even if they're not in a great place rules wise about now.

Here's a photo of the progress on the 8 of them so far, with the backdrop provided by the Amazon box I'm currently using to store them and all the paints for them: 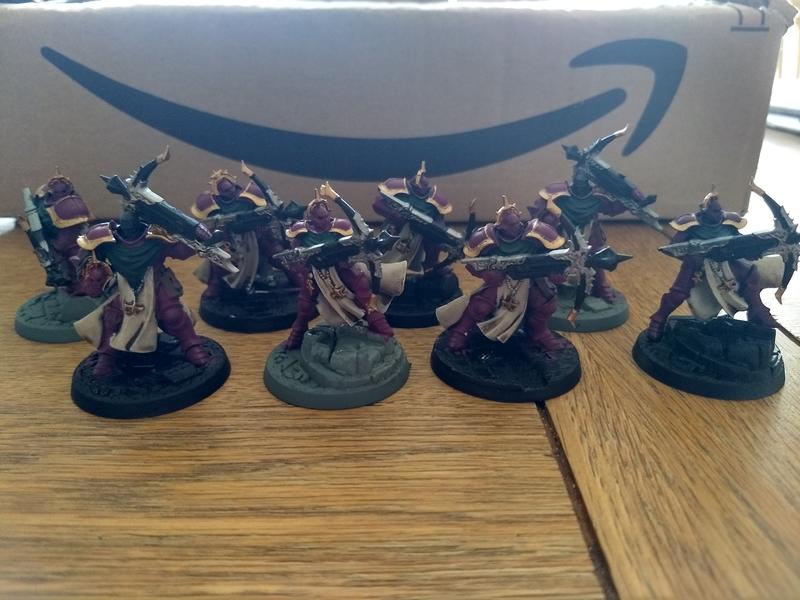