The Storm of Sorrows

Legion of Grief at CanCon2020

Hello there people, been a hot minute hasn’t it? I’ve been a little too busy to spin yarns about my personal favourite sowers of terror and woe, but I’m back and ready to burn CP like they’re going out of fashion. Without further ado or preamble, the list I will be taking to CanCon 2020. 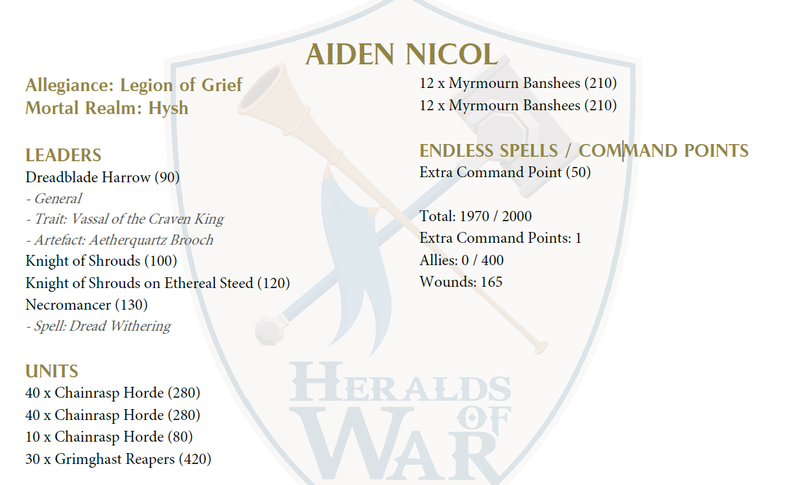 As regular readers can clearly see, changes have taken place. Friendship has been ended with Dreadscythe Harridans, now max-size blocks are my best friend. CanCon (and the TransTasman Cup held the night before) are competitive events, so any illusions around having a “fun” list have been dropped. Below is a rundown of the changes made between Masters2019 in NZ and CanCon this coming weekend.

I said in my pre-masters post that this little lad was on performance review and he just didn’t make the cut, forcing me to outsource his role to a more competent hero. 140pts is simply too much for a cut-rate Vampire Lord who’s regen is tied to an unbindable spell with no buffs to cast. The +1 to wound was the only thing keeping him in the game, and frankly having +1 attack works better than that in this army. Maybe see you later in the new Nighthaunt book buddy, until then you’re gonna collect some dust for me.

Knight of Shrouds on Ethereal Steed – Replacing Guardian of Souls

The Knight of Shrouds will be replacing the Guardian of Souls as the +1 to attack command ability brings far more utility to my list than +1 to wound and occasionally bringing back dead models. He is also far, far more mobile and therefore better at hero-driven scenarios and chasing after units to provide Inspiring Presence and All-Out Attack.

I was blinded by my buyer’s remorse with these lasses, they simply are not good enough for their cost. Point for point they cost the same as Grimghast Reapers so you would expect them to be every bit as powerful as them. Do you remember Dreadscythes dominating the meta? Me neither.

Something everyone can agree on, Chainrasps are the best unconditional battleline GA: Death has ever cast it’s eyes across. They’re especially powerful in an allegiance that can bring slain units back, as killing 40 once is an uphill battle. Killing them twice? Good luck.

Grimghast Reapers – Increased from 20 to 30

The king hitters of the ghost roster, a unit of 30 of these featured in nearly every top Legions and Nighthaunt list since the day they came out. A unit of 20 is durable and threatening, but with a 2” range a unit of 30 is stronger in every possible way as the only drawback, some models not being able to strike, is not an issue here. The 30 models with a 4+ ethereal save will blockade any foe, and hack them to pieces in short order.

As the Realmscape Magic is active at CanCon, nearly from day 1 we have had chatter in the NZ competitive scene heading over that they plan to abuse this as much as humanly possible. Expecting their behavior to be the norm among the Australian competitive scene and having no viable way of abusing it myself, I set about doing the next best thing… riding those coattails directly to victory. Any player attempting to spam magic or endless spells risks turning my Myrmourn Banshees into absolute engines of destruction, given they are now paired with the KoS on Ethereal Steed to give them an additional attack on top of their +1 for an unbind and +1 for a dispel.

This list is extremely transparent. If the enemy lack numbers, or the ability to punish my numbers in any meaningful sense, I will swamp the objectives and slowly trade them out of the game as my models drag themselves back up and into the fight to keep them locked in place as my threat units sweep in and over for the kill. The strategy is tested and time-honored, and is sure to give anyone unprepared for it one hell of a headache.

With seven games ahead spread over 3 days, I may indeed be in need of a Command Point to resummons myself back from the cold void of death. Reminder to anyone going over to CanCon to drink up, stay hydrated, and if you see me come say hi. I’ll be the ridiculously hairy short man with the obnoxiously loud voice.