“Akhmen-hotep, Beloved of the Gods, Priest King of Ka-Sabar and Lord of the Brittle Peaks, woke among his concubines in the hours before dawn and listened to the faint sounds of the great army that surrounded him.”

For this week's Am Reading, we take a look at the Warhammer Chronicles trilogy The Rise of Nagash, by Mike Lee.

I picked up this collection last year as preparatory reading for my new death-themed army. The background and lore is a huge part of the hobby for me — so much so that I often write entire novels to bring my collections to life — and a series digging into the Great Necromancer and the history of necromancy itself was a no-brainer. It should be said that I also have a long-lived interest in ancient Egypt and the Old World's geographic equivalent, Nehekhara, so the series had a lot going for it before I'd even turned the first page.

What did I think?

As deep dives into ancient Nehekharan culture, warfare, and religion go, the three novels in this series smash it. From the first few pages, I found myself drawn in by the setting and the details that bring it to life. The Nehekharans genuinely belief their gods fight with them on the battlefield, if only they uphold their covenant and make the ritual sacrifices necessary to invoke them:

"Akhmen-hotep and the nobles of the great army gathered by the waters of the oasis, glittering in their martial finery, and offered up sacrifices to the gods. Rare incense was burned to win the favour of Phakth, the god of the sky and bringer of swift justice. Nobles cut their arms and bled upon the sands to placate great Khsar, god of the desert, and beg him to scourge the army of Khemri with his merciless touch. Young bullocks were brought stumbling up to Geheb's stone altar, and their lifeblood was poured out into shining bronze bowls that were then passed among the assembled lords. The nobles drank deep, beseeching the god to lend them his strength."

And to all intents and purposes, their gods do fight with them, blessing the many priest kinds and cohorts of Ushabti bodyguard throughout the books with divine gifts befitting each god's realm of power. Having only known ushabti as animated temple constructs built by the Nehekharan's necrotects, it's fascinating (and quite inspiring) to read about the regiments of god-heroes who went on to inspire the creation of those statuary. It's small yet creative liberties like this that really bring the Nehekharan's living culture to life for me, across the first book in particular.

Explored across two timelines in the books, Nagash's quest for dominance over all Nehekhara and the priest-kings' campaign against him form the driving force of the story, and I would've loved to read more about the characters we meet over the course of the series, perhaps at expense of some of the battle scenes, of which there are many.

As well as the more character-driven parts of the story, I particularly enjoyed the way Lee explores the Nehekharan response to the undead, which is all the more horrifying for their beliefs in the sanctity of death and the afterlife. As a reader, I'm quite familiar with the concept of the undead as a Warhammer army and fantasy trope, but Nagash the Sorcerer offers us a glimpse of a people coming into contact with it for the very first time:

"Something heavy crashed against the side of the chariot to the priest king's right [...] A terrible stink emanated from the attacker, and Akhmen-hotep smelled bitter blood and freshly ruptured bowels [...] It was one of the Usurper's tormented soldiers, clad only in a ragged, blood-stained kilt. Its chest was misshapen, having been crushed by the bronze-shod wheel of a chariot, and a spear point had torn open the warrior's cheek [...] Akhmen-hotep choked back a cry of horror. Nagash's unholy powers were far greater than he imagined. The dead rose from the bloodied earth to do his foul bidding!"

My favourite thing about the book(s)?The epic trilogy offers a fascinating look at Nagash’s origins and the influences that shaped his rise to power, as well as his relationship with the vampires and all things undead. This is something that Games Workshop really seems to have run with in the Age of Sigmar setting ("All are one with the Great Necromancer") so I found it really interesting to see this theme play out here, so early into Nagash's story. The relationship between my vampire protagonist and his get, and in turn Nagash and my vampire protagonist, is central to the novel I'm currently drafting, and I gobbled up any and all inspiration I found across this series in relation to Nagash's control over the vampires and those touched by necromancy:

W'soran made his way towards the king's dais. Hunched, growling figures paced him from the shadows along either side of the hall [...] Of course they served the Undying King [...] Every creature within sight of the great mountain, living or dead, likely bent its knee before Nagash's might. W'soran did so as well, falling onto his knees before the dais.

Of course, my favourite character is W’soran. From the moment I learned that he featured as a PoV character in the series, I had ordered the omnibus. Lee does a wonderful job of capturing his character. As you might expect from the progenitor of a bloodline that goes on to become as reviled as the Necrarchs, some of the most affecting descriptions come not from W'soran but those of other characters observing him. (I'd love to share these here but I wouldn't want to spoil anything for you. Let's just say that long before W'soran's physical form one day degenerates into something you might recognise more immediately as a Necrarch now, there are aspects of his characterisation that inspire horror and awe even amongst his vampire lord equals.)

If you have any questions about the book or you want to compare good ol' fashioned notes, drop me a message!

Haven't read it yet?  Order a copy, turn down the lights, and dive in... 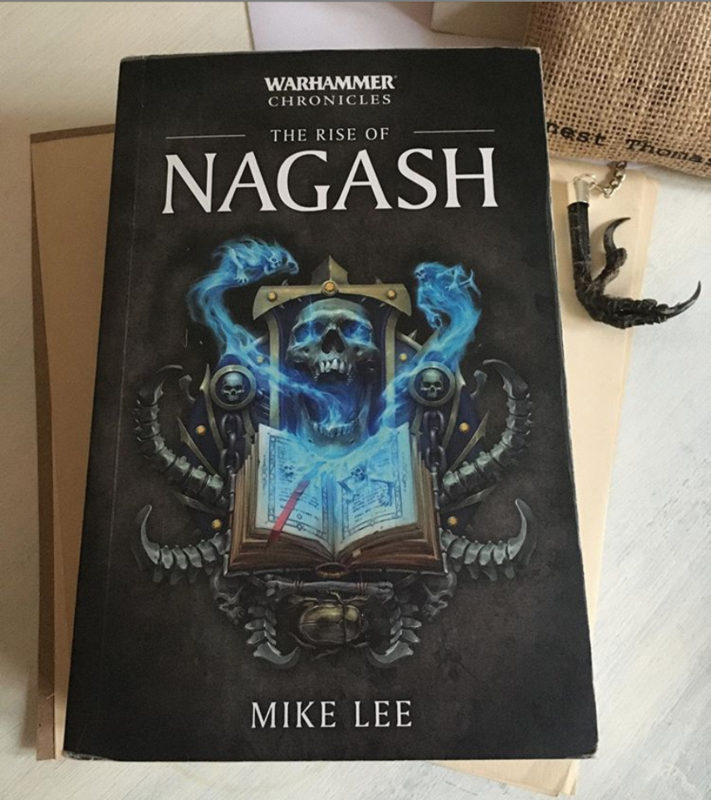