Thanks to Mr Anthony Poole on the ole Twitter machine, I have been able to see the new Nighthaunt battalions designed to represent Lady Olynder's dark and powerful Emerald Host, lets get stuck in.

When the Emerald Host was announced I was reasonably excited. Earlier Tome Celestial releases have either been a pleasing little addition (Anvils of the Heldenhammer sub-chamber) or an overtly pushed "probably to sell a particular under-performing model" release (Syll'esske and their Host). As anyone who reads here knows, I've never been a fan of Nighthaunt WHEN COMPARED to Legion of Grief. I had hopes that this release may give Nighthaunt some edge, maybe make them a more compelling choice. And worst to worst, hopefully the battalions would be cheap so Nighthaunt could have easier access to artifacts and CP while MAYBE getting a decent ability in the mix. Was I disappointed?

But you aren't here to read the faded dreams and distant longings of the local madman. You're here for substance, for something to sink your teeth into, the real meat and bones of the affair. And I would never deny you either. 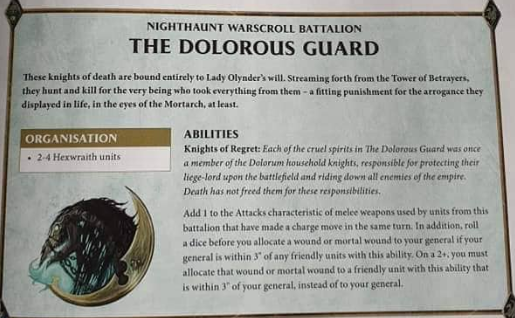 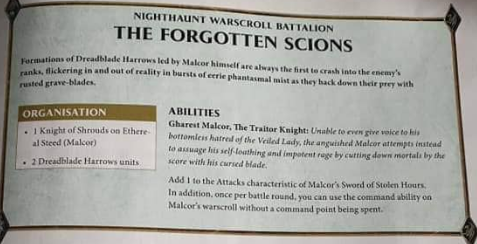 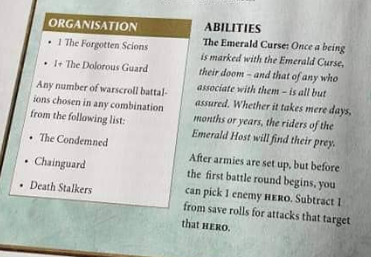 Well well, aren't these lovely. Thematic, with a delicate splash of lore to whet the whistle of those that enjoy that sort of thing (you know I do), a spice of viability at Warhost level gameplay (pour that right on) and a finishing touch of not being overpowered enough to attract undue attention (slide right under that radar baby) we have the finished product. But let's talk about each in scintillating detail.

Already I'm in love. Use a command ability... for free? Well just move aside Archaon, a new Everchosen is in town. A Knight of Shrouds on Ethereal Steed is always going to be something Nighthaunt wants to take, and Dreadblade Harrows are THE unit for teleporting about in hero-centric missions and serving as a vehicle for the generic Command Abilities like All Out Attack and Inspiring Presence.

Now take all of that and add a free spend on the Command Ability, while ALSO giving you a Command Point for taking a Battalion in the first place. KoSoES command ability is a premium tag on units that either have decent rend, or have potent on-hit effects. If only we knew a suitable unit that needs the help, and can actually keep pace with Malkor and his Lads. If only...

The Dolorous Guard - Nobody Expects the Spectral Inquisition

Oh lord Nagash yes. This is a battalion to finally make Hexwraiths worth taking. Using Malkor's command ability on these lads will have them attacking 4 times each on the charge, that's 40 attacks from a unit of 10. To make matters even sweeter, Melkor can hang out with them on the front lines and never die thanks to them shouting "Look Out Mr President" every time harm flies his way. Good thing Mr Melkor can take a Command Trait (he isn't actually a named character) called Ruler of the Spirit Hosts to return D3 slain MODELS to a unit nearby. Yes models, not wounds. A match made in Shyish.

Yes, yes yes. No this might not be OP at Battlehost level games, but we weren't starving for a one drop option at that level anyway. What this WILL be viable at however is Warhost level, where it will be VERY viable. An amazingly cool, cavalry themed army that yields a whopping FOUR command points at the start of the game, one-drops the list (definitely take one of the two Chainrasp battalions here, Death Stalkers is a bait) and pops the ability to take the enemy general down a peg. Troubles with Katakros? Archaon up your nose? Got a Rotigus you just can't shake? Drop that armor save by 1 and watch as your Myrmourn Banshees turn Katakros into a 6+ save.

I do however have a very interesting notion. "Any number of warscroll battalions"... does that mean we can take zero and only need to take Forgotten Scions and The Dolorous Guard to take this? I would await an FAQ but if we can... lordy lord.

Only one disappointment, where on earth is Olynder? The whole article talks about her history and grandiose power across the realms of death, but this battalion doesn't have a way to take her. Otherwise, I love this stuff. I'm a happy ghost. Look forward to some playtesting blogs with it.