Jump to content
The Underguts Mawtribe passed through the Gate of Whispers, entering Stygxx on the behest of the Flesh-eater Courts. Charged with raiding the Stormvault discovered at the Hookfort, Slaughtermaster Bufolg Bloodbelch led his Ogors from the realmgate situated on the Coast of Loss and headed inland to see what treasures awaited them…
Vandus Hammerhand himself, along with a retinue of the Hammers of Sigmar had received word of the incoming Gluttonous nomads and were guarding the Stormvault as the Ogors approached. The Lord Arcanum and Knight-Incantor failed to harness the magical energy that runs amok since Nagash’s Necroquake and the Stormcast gunline didn’t fare much betterm killing only one Iron gut. A unit of Sequitors dropped in the from the Celestial realm to take an objective but lost their heads, charging some Ironguts and Mournfang – only to be completely destroyed in the process. In return the Ironblaster nearly killed Vandus with a precise shot as the Ogor horde hungrily marched forward.
The second round saw Sigmar’s finest fare much better and as the Lord healed the Celestant General, The Incantor’s spellcasting was also successful as he brought the Everblaze Comet down hard on the Underguts. More Stormcasts appeared from the Celestial realm as the Retributors and Evocators both dropped behind enemy lines, unfortunately neither unit was able to make a charge. The shooting fared better too as more Ogors began to fall to the lightning bolts of the Stormcast.
The Ogor shooting was not nearly as productive as the Leadbelchers failed to make a dent in the golden armour of Sigmar’s first host. The Ogors on the frontline made several charges with the most important battle taking place in the centre as the large Irongut unit decimated the Fulminators. On return the Evocators very nearly killed the Beastriders on Thundertusk but they held on by a wound. This combat phase also saw the highlight of the battle for the Hammers of Sigmar as some Mournfangs took out a unit of Liberators only to see them reappear on the otherside of the battlefield, right on top of an objective.
Unfortunately for Sigmar’s men it was to be of little consequence as the third battle round proved decisive for the Undergut tribe. It started with Vandus hammerhand and his Lord Arcanum countercharging the Ironguts and decimating them. The Incantor’s Celestian Vortex and some headshots from the Vanguard-Raptors saw more of the Ogors fall. In the Ogors rearguard the Retributors all die after some miserable rolls, the Evocators however are more successful as they finally take down the thundertusk. With both sides vastly reduced it is the central fight that decides the battle, starting with the Ironblaster finally getting the better of Vandus Hammerhand. The Legendary Lord-Celestant goes down and it’s the beginning of the end for the Hammers of Sigmar. Some Mournfangs join the fray and take out the Lord Arcanum. With barely any Stormcast left on the battlefield to stop them, the Ogors are able to take a primary objective and seal the victory. 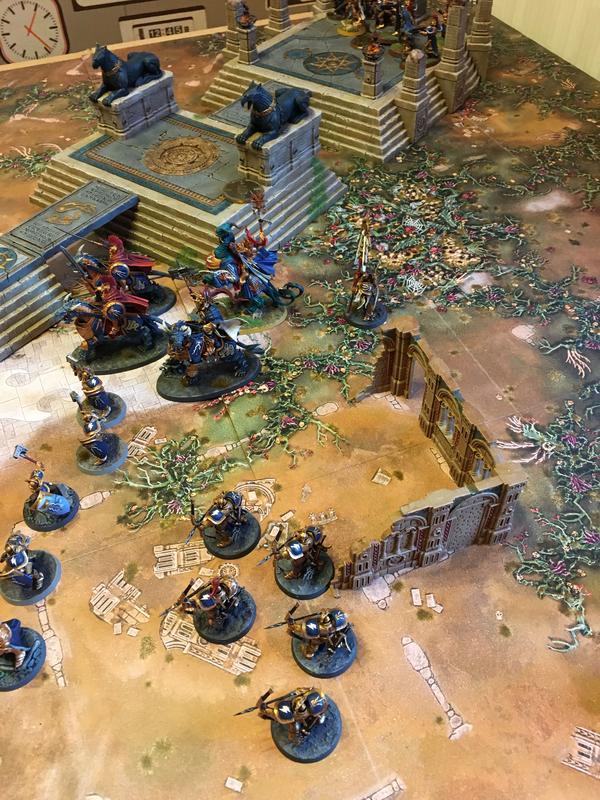 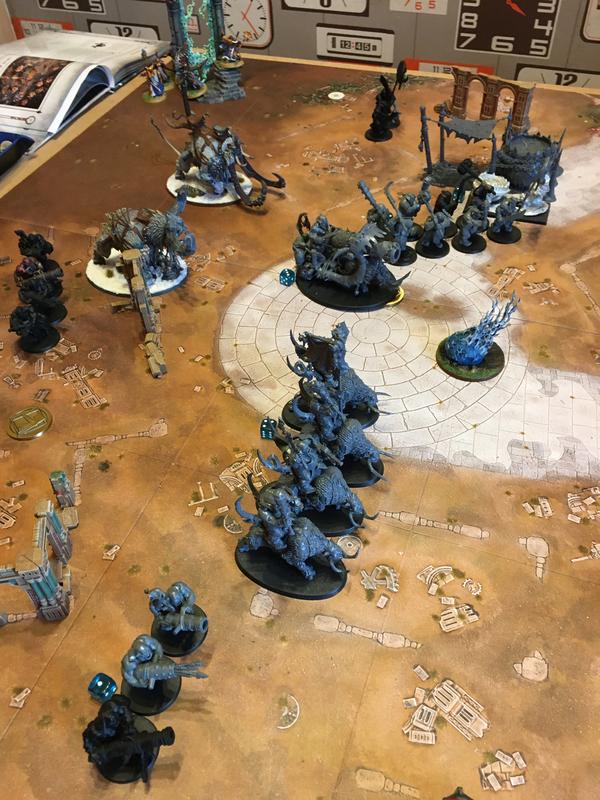 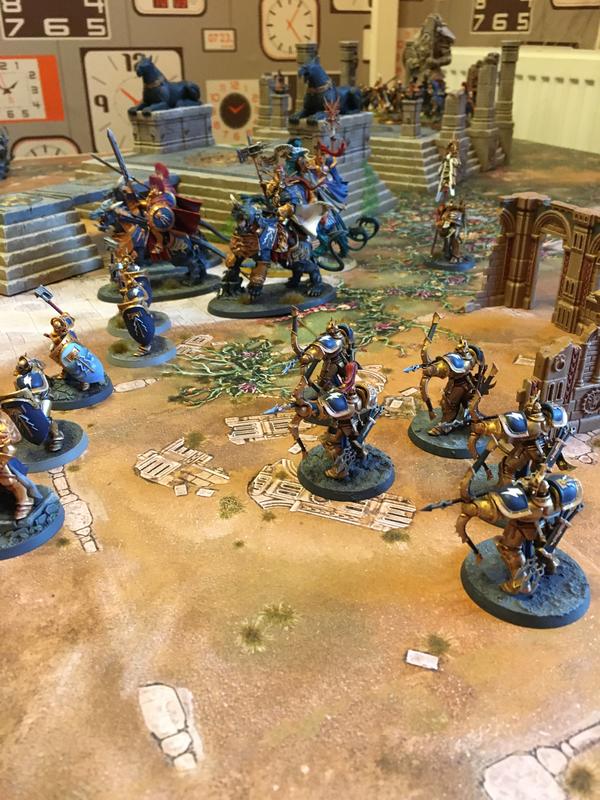 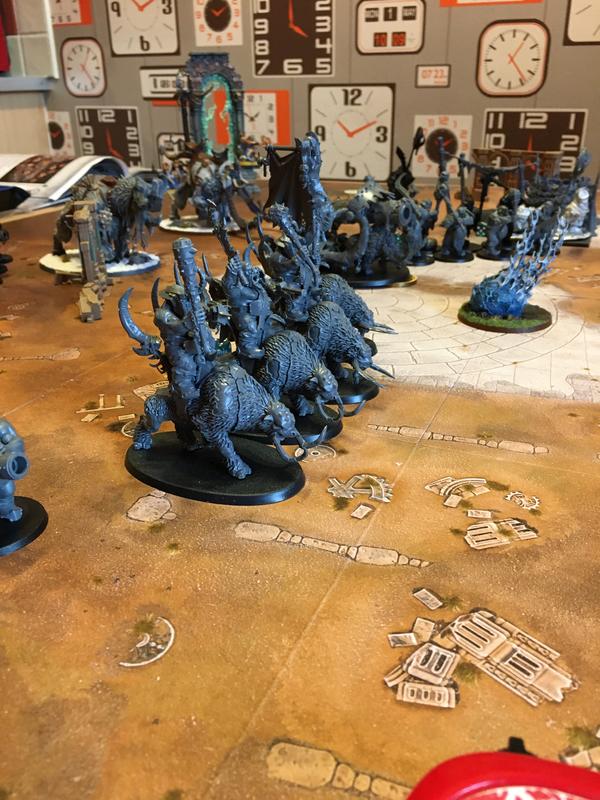 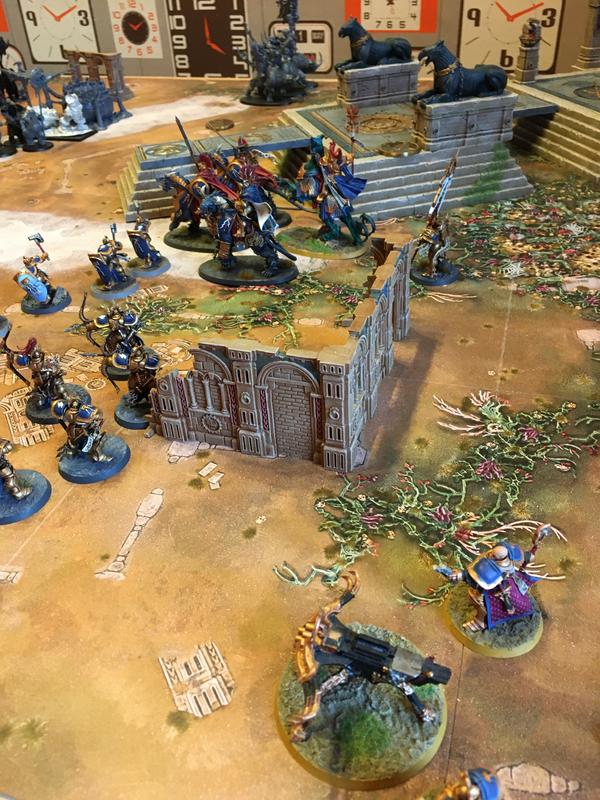 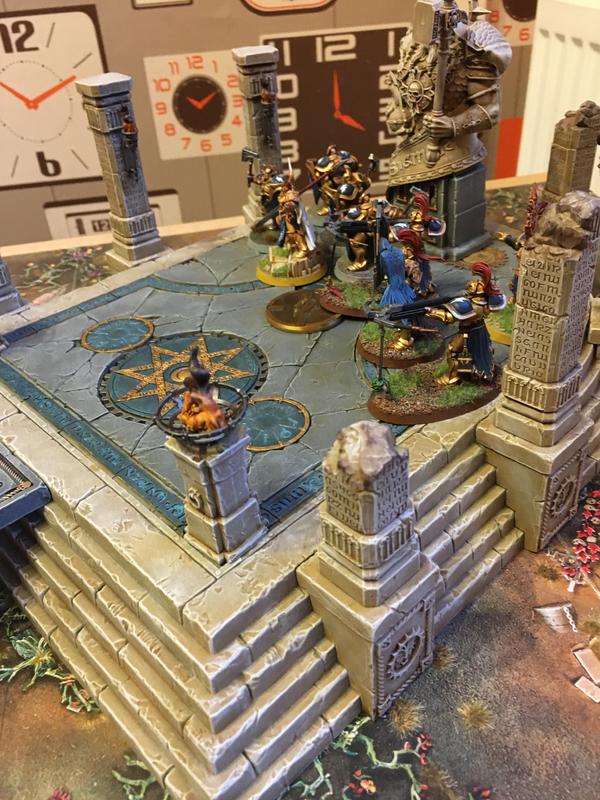 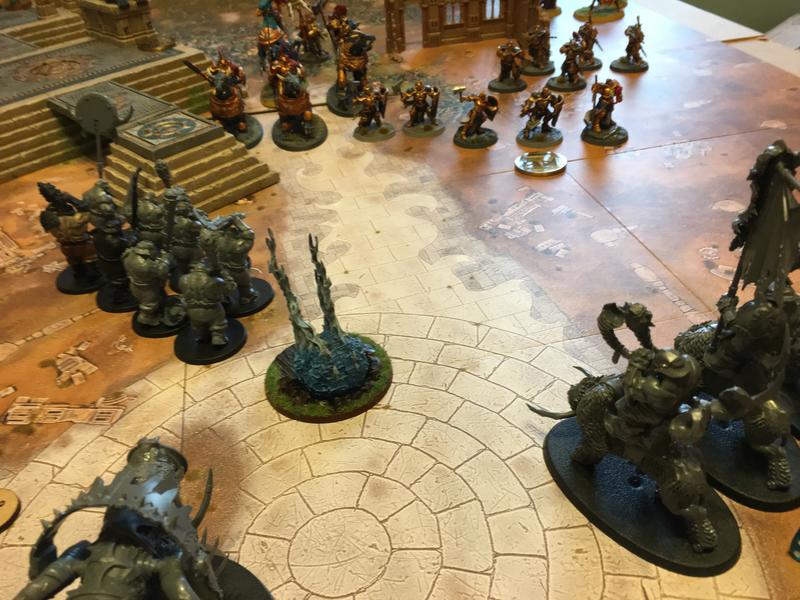 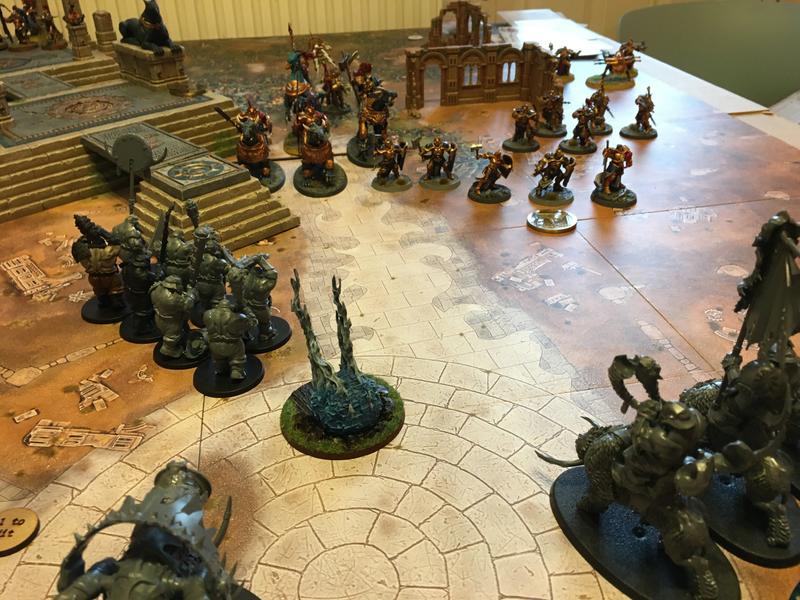 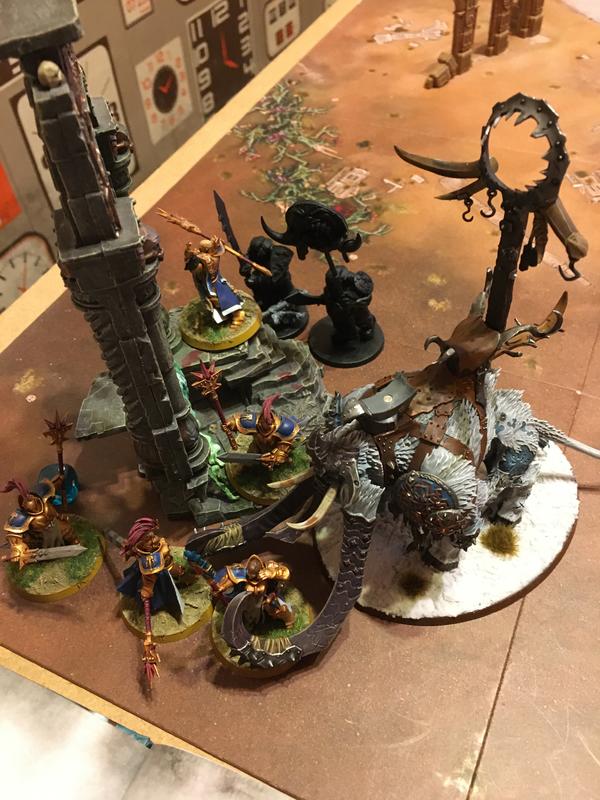 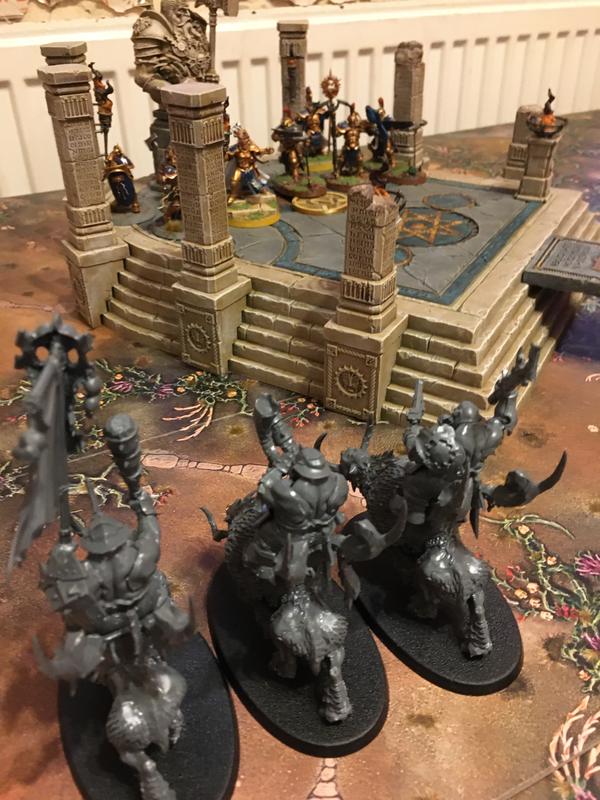 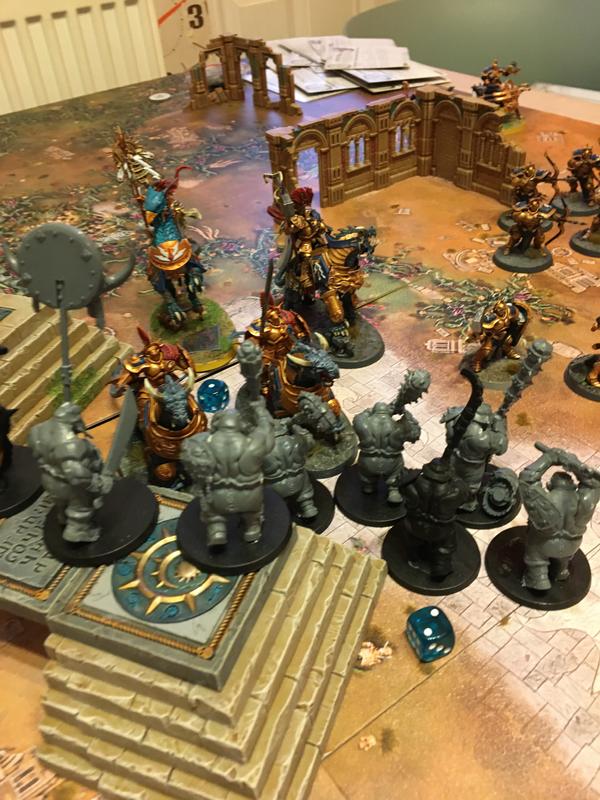 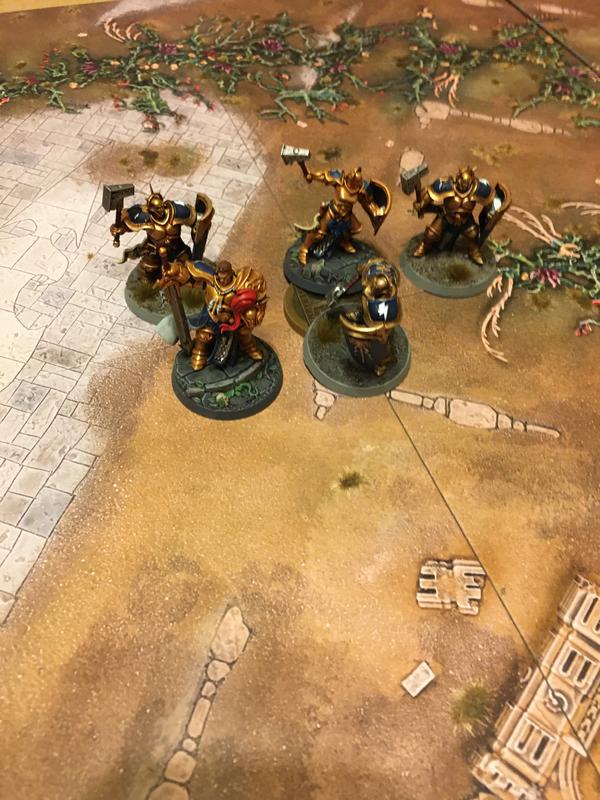 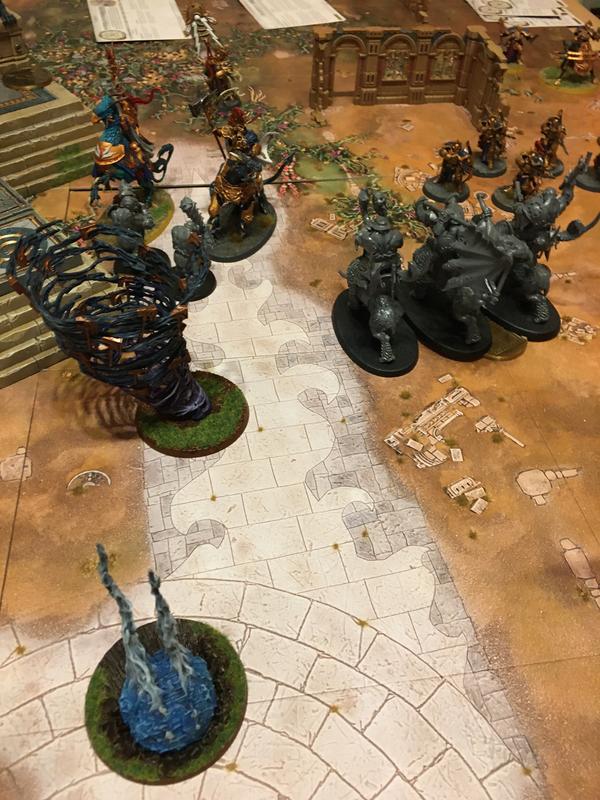