Hey all. I did say there would be one. I had planned to get this out a little sooner but needed some time to detox.

Masters 2019 was a reasonably mixed bag, with the Top 20 players for 2019 majority living in the North Island only 11 of them accepted the invite. This is not out of the ordinary, no masters event has ever been attended by more than 65% of the Top 20. However due to the nature of the event and it being in the South Island, only a single North Island player who didn’t make the Top 20 (number 21 on the rankings) accepted the invite and the rest of the numbers were filled by locals, causing the field to go as deep as number 85 on the standings. The result was the top quarter of players largely playing others in their bracket, while the middle pack had an awkward disparity in levels of skill and experience.

Another bugbear some players from the North had during the wind-up to the event was the introduction of soft scores into Masters. The previous Masters events have categorically lacked these, a fully painted army and perfect sportsmanship aren’t fields to be rewarded, they’re expected. These soft scores caused heavy consternation initially, though I personally defended them saying that as long as people maintained the standard expected from previous Masters events, they’d receive full points in these fields anyway.

Given I played five full, five turn games over the weekend I’m obviously not going to cover them all. I will post my results for each match, and I plan to cover off my game against New Zealand Master 2019 James Page and my personal favorite game of the event against NZ Warhammer icon Shaun Bates in future posts as they characterize what happens in the worst possible matchup and what happens in the best (army-wise).

So without further ado, the results.

Opponent would go on to win the event. A canny player, James used his superior movement and the ability to decide who starts to tag both objectives on turn one while throwing disposable units of Ardboyz into my only units capable of contesting these points. As I was unable to retreat and push the enemy off the points in the same turn I lost this one handily.

I made my opponent start as I had the choice, and interestingly he summoned Chronomantic Cogs and immediately set it to speed up time, while deploying his whole army directly in front of me (the tournament ruled that all woods on the tables were Citadel Woods, an interesting concept none of the northern players abided by in games between each other due to it not being in the pack. However it seems my opponent misread/cheated me here as Living City can’t just deploy on Citadel Woods. This would be the beginning of my disappointment). Not realizing my opponent was not actually allowed to do this, I simply charged headlong into him, obliterated a full 60% of his army immediately and burned all the objectives on the table turn two. The decision to set Cogs to speed up time sealed my opponent’s defeat more or less immediately, as well as his cocky (and illegal) choice of giving me his army as a stepping stone to get to his objectives. Overall a frustrating game as I spent far too much of it having to read my opponent’s battletome and correct countless errors that came up.

This game was a rough one for my opponent. Shaun’s army excels against all comers unless they have large numbers with resistance to battleshock, or the ability to get around his devastating rend. Conveniently I had both in spades, so Shaun’s superior ability to play the game didn’t mean a lot in the face off 150 wounds hiding behind an ethereal save. Shaun and I yarned the majority of the game, engaged in flagrant cheating and deception, then wrapped up quickly to get a beer and get ready to shoot back to our accommodation for more yarns and beer.

This was the highlight of the weekend. One of The Boys (Cameron, Seraphon) has a lovely family home locally overlooking the ocean with a fantastic outdoor eating area. Local legend Richard acquired vast sums of meat as a tithe-offering and manned his barbecue, bring succor to the masses. A few of the locals made it up as well as all the players who traveled for the event. We had a fantastic time, had some good chats and overall it was a perfect experience. 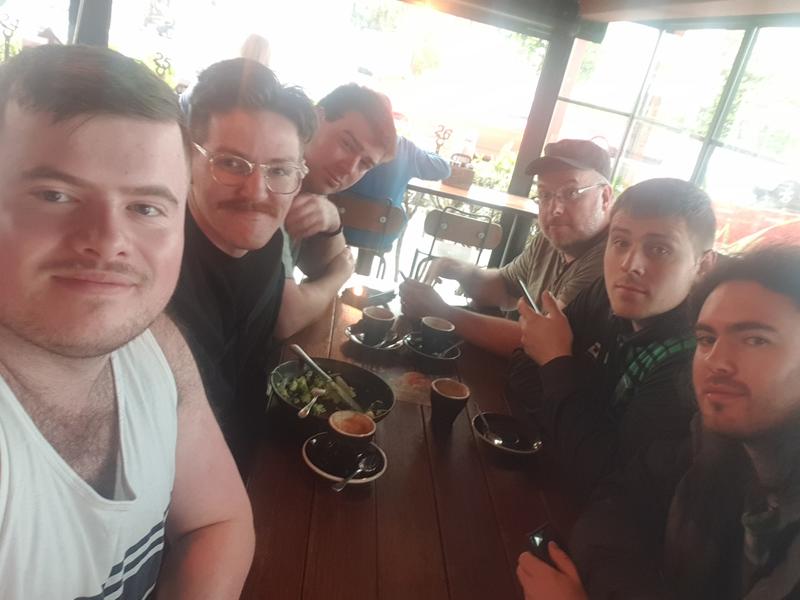 The next day we rose early, briefly debated the virtues of going to the Zoo, then made our way down to a local café for a group breakfast. Given the large number of Wellingtonians in the group we needed to get some avocado toast in their systems before they start shriveling up. We took pictures, I mounted an antique motorbike and smashed back a milkshake and mince on toast for breakfast. Overall pretty fantastic. Remembering we had come down for a Warhammer tournament, we paid up and headed to the venue. 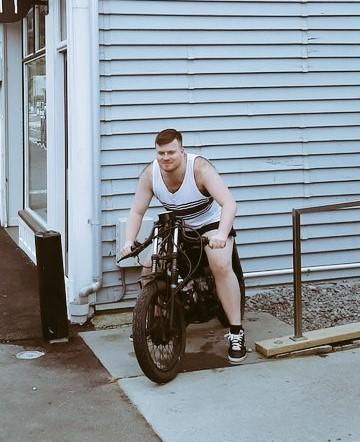 This was a slow-burn game. My opponent was hesitant to leave his deployment knowing that I would swamp him and fly directly over him to the objective, and resolved to turtle up. The game boiled down to me mowing my way diligently through the numbers while constantly reviving my losses to ensure control of my home objective. This was the game in which I entered the “Grief Zone”, spending 7 Command Points in a single turn, while starting on only 2. This made my army in the last turn of the game majority hitting on 2’s rerolling 1’s, wounding on 2’s, with the enemy saves diminished by my rend and Dread Withering. 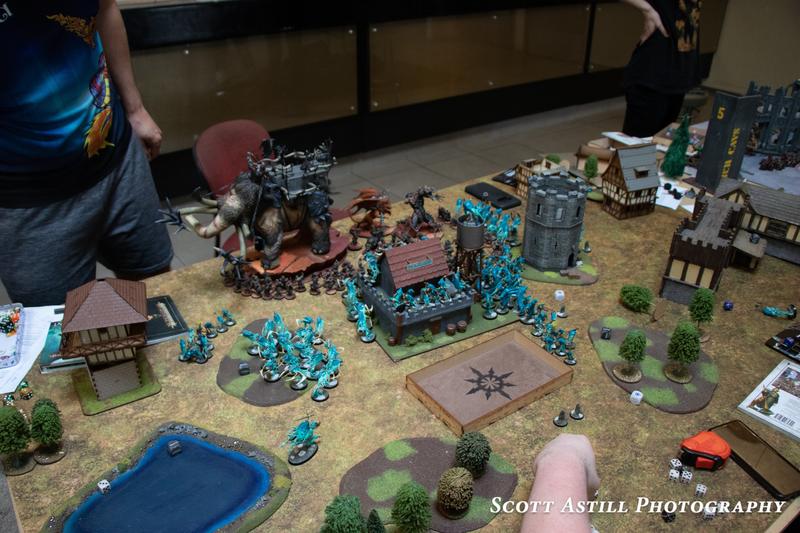 This game was extremely swingy the whole way through. I used my gravesites to sneakily move around his overwhelming numbers while keeping his rats locked on his side of the table for the first 3 turns by callously discarding my Grimghast Reapers and Dreadscythe Harridans, fully intending (and succeeding) to return them to the table due to my general being so far removed from the game I could safely bet on it. My army copped massive waves of shooting but rolled less well than against the Longstrike Stormcast and I was pushed back to my deployment. A dicey Skitterleap from a Verminlord Warbringer burned an objective of mine and pushed the game towards my opponent, ending things. 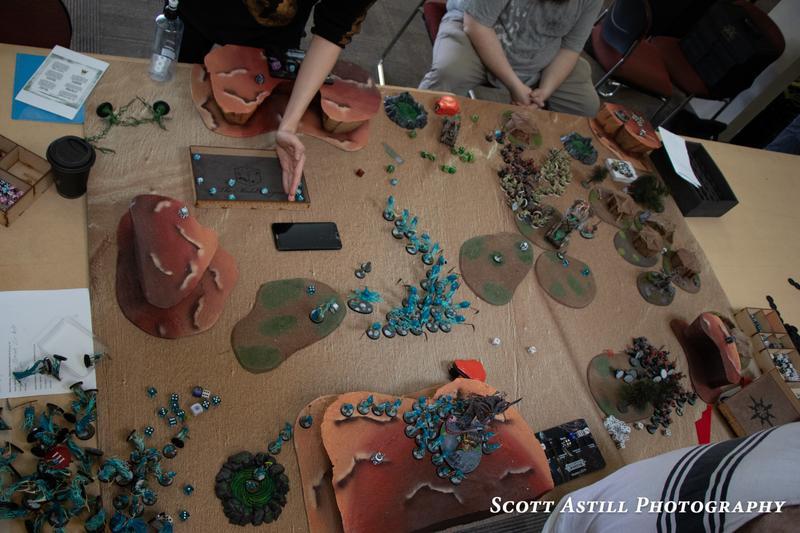 Overall, my issues with Masters 2019 stem strongly from the scoring. I defended the soft score element to those that didn’t like them, explaining that if we maintained our usual standard these wouldn’t matter. However, many people had armies that were not completed, lacking basing on models, having less than 3 colors and a variety of other issues, only to receive full paint points. I purchased and painted my army to it’s (in my opinion) high standard and full rubric in less than a month, only for it to be considered equal to these other armies.

Furthermore, I experienced numerous issues over the event with opponents either not knowing their rules or misrepresenting them, and even experiencing the poor sports of a player constantly interjecting into my game rudely and into the TO when he attended the table, only for full sports to be awarded across the board.

These issues are not unique to this tournament, and overall I’ve no doubt not representative of the scene in the South Island. However I was disappointed to travel down for a Masters event only for it to be this way. Many of my friends declined to attend due to issues with the harshness of the painting rubric making them fear they would lose out for not being as talented painters, only for it to not matter at all. I was sadly disappointed, and given the severe financial expense of the weekend compared to the payoff have little desire to travel beyond the capital city any time soon.

Despite these flaws I met a good collection of people, and I hope I acquitted myself well enough that they don’t unfollow me the moment they read this. I initially only wanted to cover the positives, but as my local club explained to me people who know me know my thoughts, and to cover less than that would be disingenuous.