Terrain: Random per GHB, no terrain with warscroll cards

Gravesites: I deployed three of my gravesites in a triangle. The first two went to either side of the center objective, just outside 9" from it. I had to place one fully in my territory,  but the other I placed just on the other side of the dividing line. The third point of the triangle was just outside 9" from the center objective on my side of the field. The fourth gravesite I placed in my opponent's deep field, a full 9" from both board edges. This meant that the first turn would be spent outside of any of their auras, but counting on my opponent's traditionally slow speed I wasn't concerned that I couldn't reach them even if he went first.

Cities of Sigmar won the roll-off and deployed first. He opted for a tight formation, hugging the offset side of the board in order to keep everything within the various auras available to him. This placed him just opposite the center objective from me, but closer to the one on my left than the one on the right. 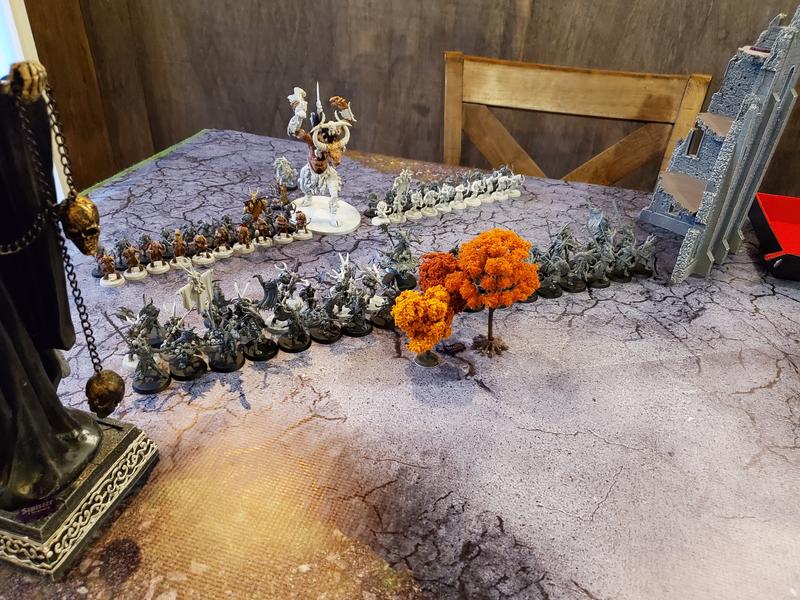 I decided to split my deployment. In the center I deployed my Grimghast Reapers, bulking them up in front of my Necromancer. To the objective on the right (hidden by the haunted house) I placed both units of my Dreadscythe Harridans and my Knight of Shrouds. That left both of my units of Chainrasp Hordes to deploy as close as I could get them to the far left objective. The terrain there pushed me a bit further out than I'd like. 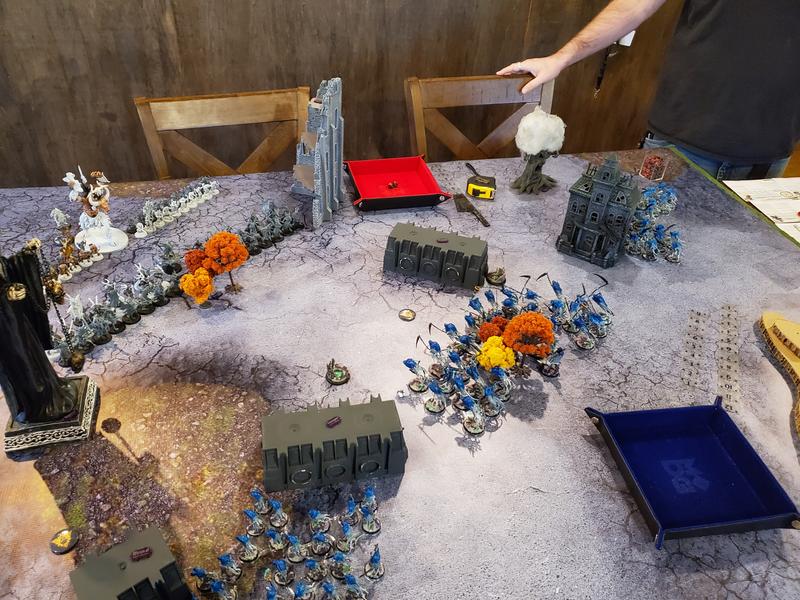 CoS finished deployment 4 units before I could, so priority went to him to decide the first round. He opted I move first. This was unusual. He usually moves first, and in half measures to bait you to into range of his crossbows. But, me putting the bulk of my forces directly opposite him, as well as a grave in his backfield, he needed a moment to try to figure just what I was up to. Passing the turn to me I moved normal moves on all my units, making sure to stop just short of where his crossbow range would be after his move, and ran my heroes toward each objective behind their screens.

On his move, his slowness meant that even after his move I was out of range of all but a couple spells. He cast them, some mortals were dealt to me that I couldn't shrug successfully, but in the end round 1 passed without much incident. 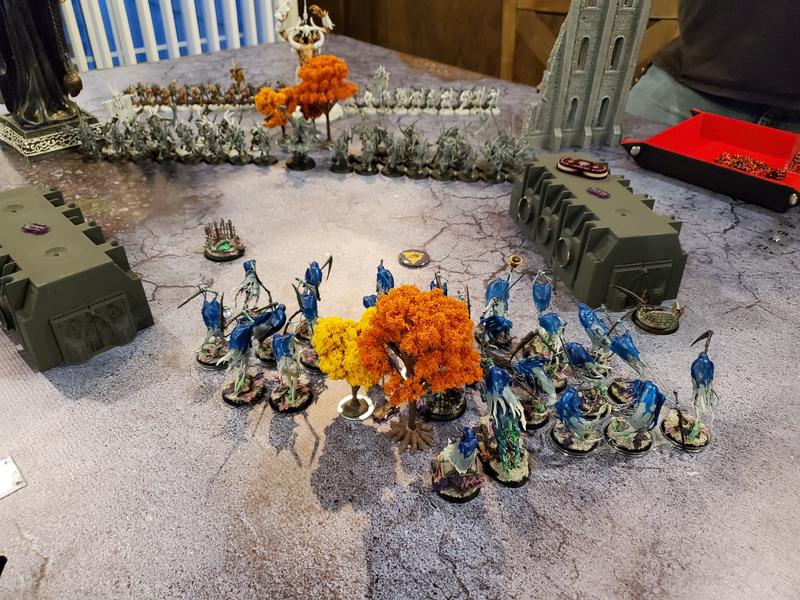 Round two came to me first. I spent my Hero phase giving my Reapers Mystic Shield, which was successful and not unbound. I didn't have anything else defensive to cast, and he was still out of range for Dread Withering, so I spent my round just making sure my heroes could cap each objective and that they were protected by a ton of models for fencing. His half was spent pelting both my Reapers and Chainrasps with his ranged while moving his melee closer. Still, just out of range for a charge. Some easily-passed Battleshock rolls later and the turn was over. 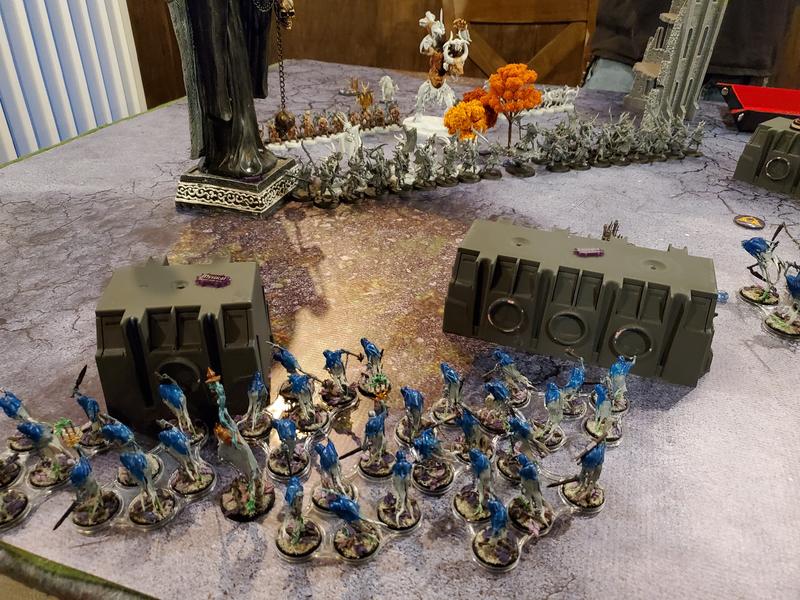 Turn 3 was my opponent's. This...did not go well for me. It was a bloodbath. It was a goddamned massacre! Spells ripped through my Reapers, ranged attacks eviscerated both them and my Chainrasps, but only after he focused Guardian of Souls for 4 wounds and melted my Necromancer off the board. My Deathless saves just didn't roll high enough, and after losing my Necro I was losing Reapers by the handful. Heroes were targeted and erased. Reapers were softened. Rasps were mostly intact.

My response was swift. Rasps and Reapers charged, but only the Reapers made it. Without my artefact I opted not to spend any CP yet for the charges in case I need them to bring back my units. The Reapers engaged, and after the exchange I wiped out half of one of his Guard units and splashed a few MWs onto the hero parked with them, but on the counter attack my Reapers were no more. 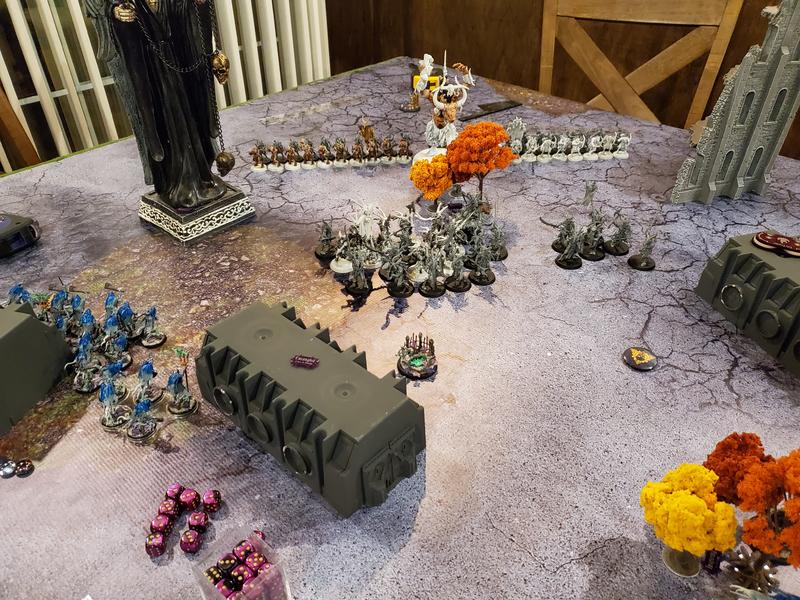 My wish was denied. CoS got the top of turn 4. Woe was my poor Guardian of Souls. Woe was another handful of Chainrasps. Worse than that, his magic and his advancing ranged line brought woe to my Dreadblade. Say a silent prayer for him, because he did all of nothing this entire game and on the verge of his entire worth being paid for in the form of Endless Legions, he popped like a Nurgle pustule, unable to move out of the way before they came gunning for him. (He's in the picture near that far gravesite because I was talking out what my next move was going to be to my friend, and now he's taunting me.)

After his cloud of bolts was over, he was able to advance onto the center objective and claim it. Meanwhile, his other Phoenix Guard split off to head for the next nearest objective, engaging my Chainrasps and removing them from the board.

On my half of the turn, I took stock of my situation. My only hero left was my KoS. My only units left were my Dreadscythes. It looked pretty bleak. But then I started counting. Despite losing almost everything, all I needed to do was hold my last objective. My Dreadscythes finally moved (represented here by some Glaivewraith proxies).  2 CPs on their runs to net a full 14" movement, they barreled into the bottleneck of the terrain to deny my opponent movement toward my KoS. The KoS himself moved back just enough to still cap the objective at the edge of the 3" this battleplan demands. I formed the Hot Gates from 300 (not really) using my Dreadscythes as the doors and the terrain as the walls. Now, the ball was in my opponent's court. 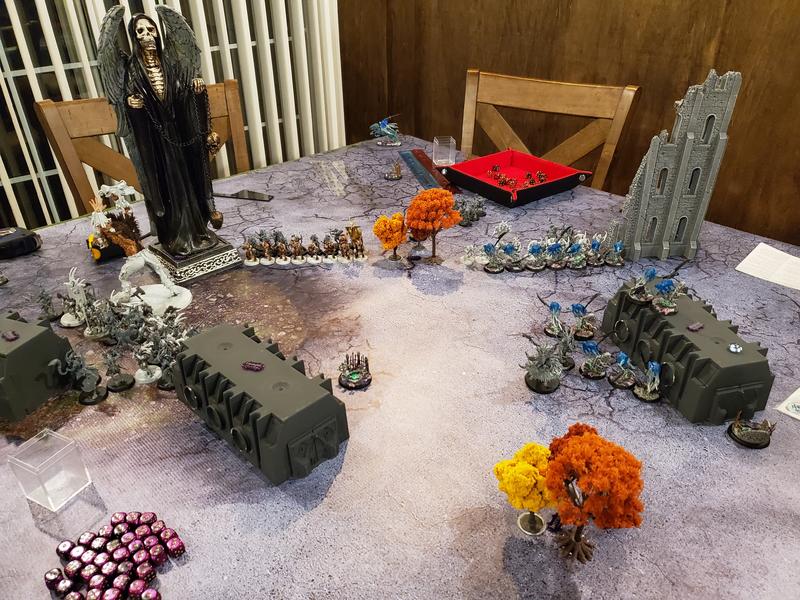 He won the roll off for turn 5. He capped his second objective. He engaged my Dreadscythes, who despite their lack of buffs and lack of Deathless managed to hold their own with minimal losses. They swung back hard, those 2 damages on nat 6 wounds hurting his melee line. The turn passed quickly.

At the top of my turn, all I could do was laugh. I had cinched the game. All I had to do was pass the turn and take my 4 points. But first, I had to press my attack with the Dreadscythes just for fun.

I had never fielded them before, and while my original plan was to spend some CP on them and get them close to a GoS and see just what they could do at full tilt, I was very surprised how they performed without all that. I'm so used to my Bladegheists only having 3 attacks on a charge, but now that I have used my Dreadscythes I think their -1 hit bubble is way more powerful a buff than a 3's-across-the-board attack profile by a mile.  My opponent, my friend, is used to seeing the same from me, so he was eager to see how they performed as well.

They piled in to attack his ranged line and managed, at 6 or 7 models, wipe half of his unit. Their counter-attack was nerfed to near-ineffectiveness. The other unit came at his Guard which took the beating much better, but I rolled well enough on the wounds and he not so well on the saves that even a number of them fell. We both were very happy to see these guys swing for the fences, and they will be a staple in my games to come. 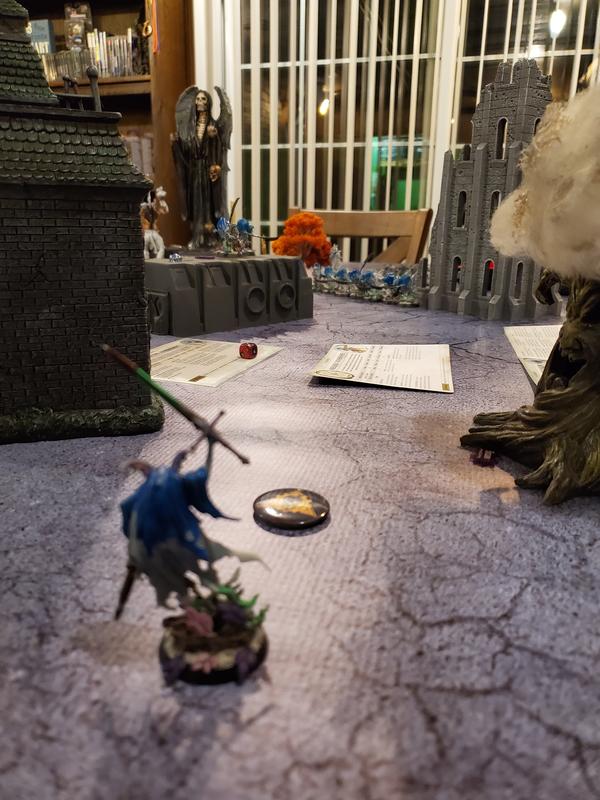 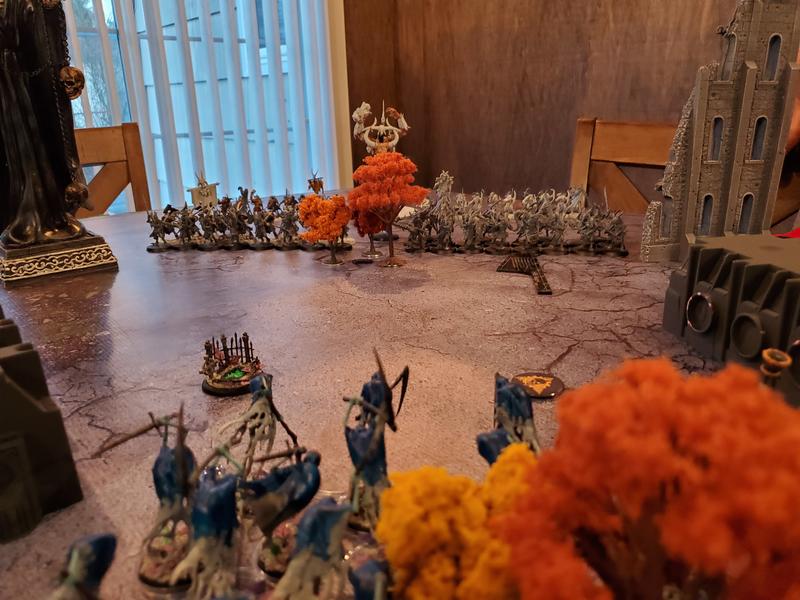 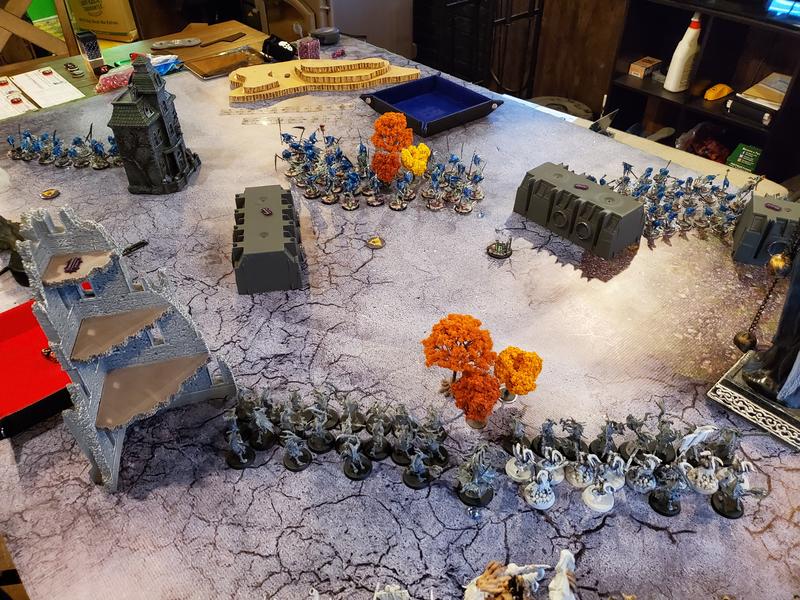