We played with all realm spells, time limit of 2 1/2 hours. Both players didn't have a list so... mostly I just have their units but not sure on spells\prayers\artifacts.

Now, I think he brought 2 endless spells and not just 1, but I'm not certain as none of them had a chance to be used anyway.

T1
He opts for me to go first and I start off right away sneaking the Corrupter behind the Cauldron with Dreaded Skitterleap but fail a Plague and Pendulum from the Corrupter. Next up, Grey Seer casts the Spell-portal and gets Wither off on the right side Witches.. Thanquol and the Warpseer get off both Warpgales into the right Witch unit, quartering their move/charges and Thanquol gets out WLV on the right and the damage begins; killing all 5 Warlocks, some Sisters and Witches and almost taking out the Medusa throughout the initial damage and movement phase damage. Charge Phase; Corrupter gets into the Cauldron and only manages to take it down to 1 and it retaliates to take 2 off him. Unfortunately the MW's don't go off so it's stuck in combat.

His turn he.. well, the Cauldron prays for Avatar Activation and Catechism on itself which I believe was incorrect (they know extra prayers but can only use 1 unlike Khorne) but I let him have it anyway. Rune of Khaine is also activated and he Orgies the Cauldron and it somehow only takes 2 more off the Corrupter. He fails to dispell the WLV and the Medusa fails her spell.. so he moves straight to movement and tries to get everything the hell away, unfortunately for him his Witches can only move 2" (EDIT: forgot to mention I'm aware it doesn't do this, we corrected it the next turn but it wouldn't have mattered as he still managed to charge the Corruptor) and are still in range of 2 nodes. He tries to get the Medusa out, but it's still barely within range of 2 nodes and the WLV finishes it off after the movement phase damage. Left side WItches and Sisters run strait at the objective to claim it while 1 of the Hag Queens charges the Corrupter.. and luckily it survives with 3 left and finishes off the Cauldron and Hag Queen. 1-3 DoK 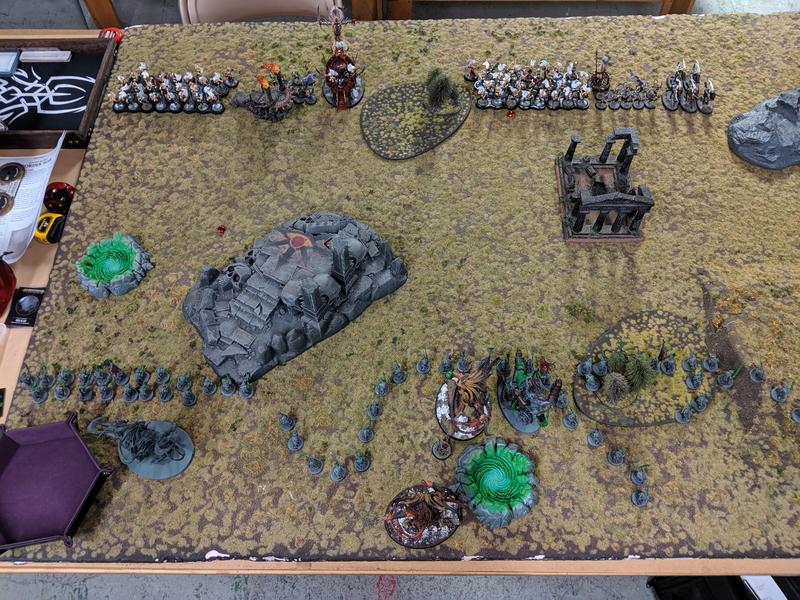 T2
I manage to get the double (although I played it safe in-case I didn't... this list is forgiving in that regard) and dispell the WLV in order to shift it to the left side Witches while the Grey Seer Skitterleaps the Deceiver in range of the left Gnawhole so it can throw out Vermintide and almost completely block off the Witches.. unfortunately it doesn't do much damage. Corrupter fails Dreaded Plague again but gets Pendulum off and kills 4 Witches and Thanquol hits them with Warpgale to keep them in the back as long as possible. I get off another Wither on the right Witches, but it hardly matters as we'll find out later. At this point I notice the right side objective is uncontested, so I use my movement to teleport the Deceiver to the right side and claim it.

This is when he decides to bring down the Khinerai who luckily whiff against the Deceiver thanks to -2 in shooting against the 1 unit of Heartrenders... but he manages to charge in the remaining Sisters and take the Deceiver down to 7 and he finishes them off in return, ensuring I still hold the objective. The right Witches (as you could imagine) charge and finish off the Corrupter. 4-6 DoK 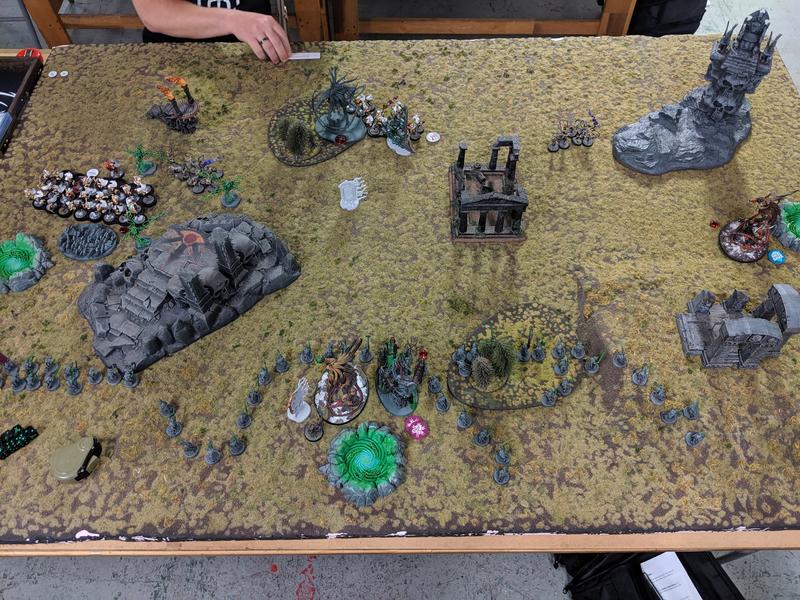 T3
I get priority again somehow and re-cast the WLV again to move it to the center (although thinking back, I'm unsure why as I really needed it to keep hitting the left Witches\Sisters\Hag Queen). Skitterleape the Deceiver and Warpseer to contest his home objective but.. I fail the charges when it's time. In the meantime, the WLV + Warpgales continue to whittle down what remains of that Witch unit. I make the decision to move and charge in the left Clanrats into the still ~15 remaining Witches while the right side unit runs into range of the objective to hopefully outnumber any Khinerai charges into them. Now, somehow, the left Clanrats survive with 6 remaining after BS and they somehow kill 9 of them. They deserve a medal.

As expected, he charges the right Clanrats and kills 8 and they retaliate to juuuust kill enough of them so outnumber them on the objective 10 models to 8 since the Warpseer was now in range to give BS immunity. 7-6 Skaven 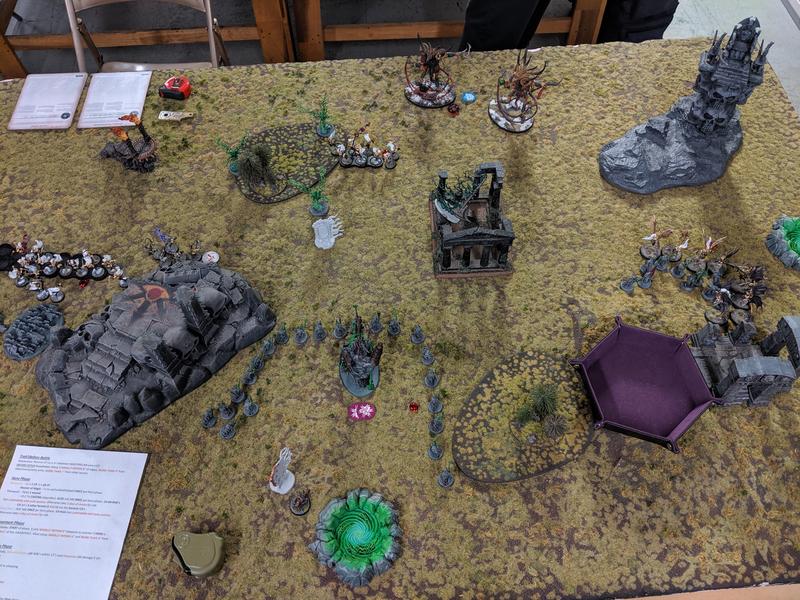 T4
At this point we're out of time so we roll for priority and I win it again. We quickly calculate what the likely outcomes would be and determine I would keep the right, home and take his home objective. 13-8 Skaven Major Victory.

*disclaimer*: So, first off, I really did not enjoy this match as this was an older guy that was newer to the game (although he didn't want me to hold back and I gladly walked him through rules he wasn't sure on including the WLV and how it works, but he did his research well on core rules) but was... well, kind of "that guy" in his attitude. I was getting a lot of passive-aggressive remarks about "well no-ones gonna want to play you and your Skaven" and "bull****" multiple times my spells would damage him... not to mention subtly being accused of cheating when he questioned how I got off Skitterleap every time throughout this game (I mean... it casts on a 6, hardly difficult). Anyway, enjoy the read but I felt the need to put this disclaimer to vent a bit as I've never played someone like this in the 3ish years in the hobby and wouldn't wish it on anyone.

T1
I go first and get off every spell, hitting the back Vulkites\Magmadroths, Grimwrath, Runesmiter and Auric Hearthguard with WLV. The Corrupter Skitterleaps and throws out Shackles + gets a Plague off on the right Vulkites, killing 3 1/2. Warpgales go into the Runefather and Runeson while Wither hits the Auric Hearthguard giving them -1 to hit which I knew would be needed as they get bonuses to hit Monsters. The Corrupter charges the Runefather, murders it but takes 4 MW's from the volcanic blood.

He puts all his shooting and combat into the Corrupter and kills it... but I was satisfied at what he accomplished, although it would've been nice to have it to finish off the Runeson. Hearthguard show up on the right, charge the 20 Clanrats and (surprise) kill all of them, giving him control of the objective and he decides to burn it making it 0-1. 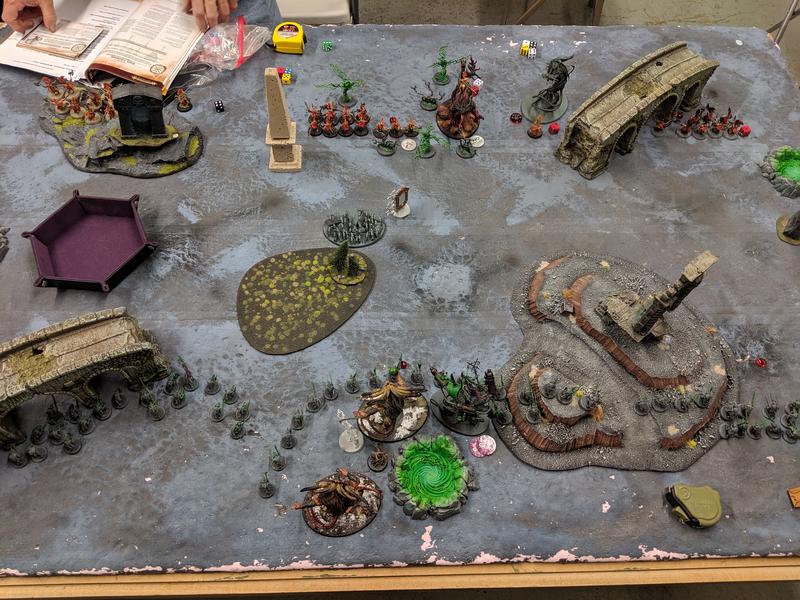 T2
Thankfully, I get the double and re-cast the WLV to the right to put as much into those Hearthguard as I could and close them down. Geminids, Wither and Pendulum all get off culminating in them having -2 to Hit and somehow only putting 3 wounds on them... Anyway, I shift my middle Clanrats to screen against the potential charge (I didn't get off any Warpgales into them, so they had full charge potential) of the Hearthguard and shifted Thanquol right outside of his 2" range so he could retaliate against them.

He puts +1 to saves on his Hearthguard and brings out the Flame-Spitter which ends up killing some of the left Clanrats in shooting. For charges however, he gets the Hearthguard in but that -2 to hit saves me.. although he still killed 9 Clanrats. 0-1 Fyreslayers 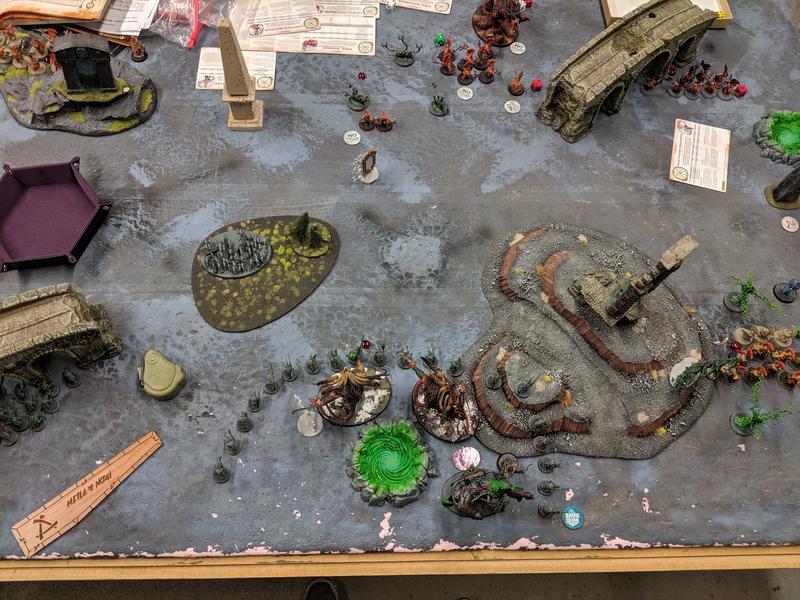 T3
I get priority and finish off the Runesmiter with spells and get off Skitterleap to throw the Warpseer to the back right Gnawhole and the Deceiver Skitterleaps himself to charge and contest his back middle. Thanquol promptly torches all the remaining Hearthguard and brings them down to 2 and the rest run away in BS.. all the while 1 Warpgale goes off on the Runeson, halving it's charges while shackles halves its movement. The Deceiver charges the Vulkites bringing them down to 3, so he still holds this objective. Now, I was going to burn my left and right for 6 VP, but I decided to only go with my middle and took the risk that his left Vulkties would fail the charge (spoiler; they didn't).

He shoots everything into the Deceiver and misses thanks to -2 to hit.. but the Flame-Spitter takes off more from the left Clanrats and I pull casualties to give him ~10" charge.. and he gets it on a 13 total with their +1. Wonderful. I positioned my Deceiver in such a way that his charged Vulkites and the Shackles prevented his Runeson from ending his (now 6") charge within a 1/2" of the Deceiver. Right Vulkites charge the Warpseer and the left Vulkites wipe out the Clanrats and he takes control. 3-1 Skaven 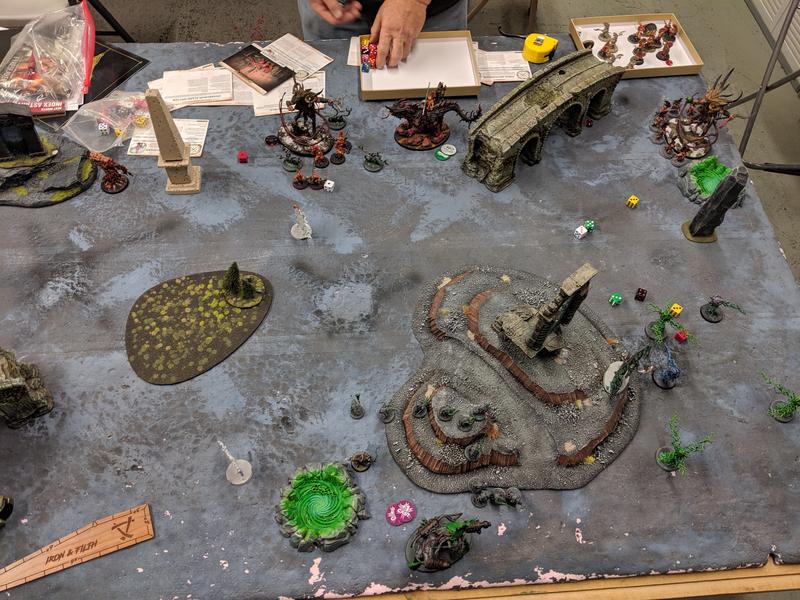 T4
I get priority (I've never won the roll off so many times in 1 day.. this will probably change next week thanks to the dice gods) and Skitterleap the Grey Seer to contest the back right to help out the Warpseer.. but my spells either fail or do 1-2 MW's a piece. Combat has the Warpseer bring the Vulkties down to 3 so he still has control.. but the Deceiver manages to kill off the remaining Vulkites and Auric Hearthguard, giving me control of his middle objective which I burn.

His turn is pretty uneventful other than the Runeson charging and killing the Grey Seer. 4-1 Skaven 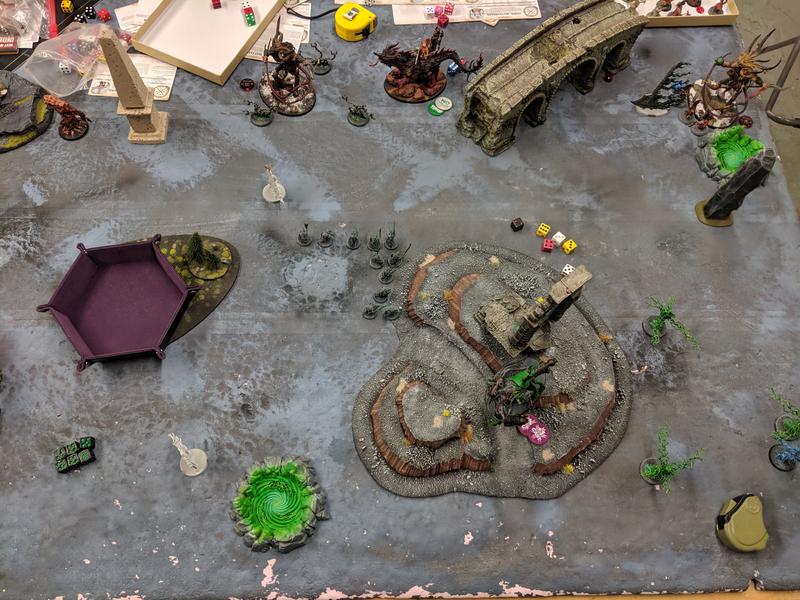 T5
AGAIN I win priority and Skitterleap + Charge the left Runesmiter, killing it and taking control of that objective. The Warpseer earns his medal by rolling 6 MW's on the Runeson, finishing it off and getting it off the objective. Unfortunately I manage to kill all but 1 Vulkite, keeping the Warpseer in combat.. but thanks to the pile-in, I get well within range and his remaining Vulkite is just a 1/2" out of range of the center (which, by the way, we had to get the organizer to review as he didn't believe objectives were measured from the center all of a sudden) giving me control of it. I burn both his left and right.

We move onto his turn and he burns his objective, which of course isn't enough (he only controlled it 3 turns) so we end with a 5-4 Skaven Major Victory.

Despite the 2nd game, I had a lot of fun and it was incredibly rewarding to eek out a win against him. I'll never understand why people get so absolutely flustered at a loss (not to say I don't get down when I lose sometimes, but man, this was crazy) in such a friendly environment.. but ah well. I apologize for all the venting about this and I hope it didn't ruin the battle report. Overall I think I will easily be playing this list some more but I'm a bit concerned what our points changes (or warscroll changes) will do to it's composition. Worse case scenario I use it as an un-optomized fun build and go back to my standard... unless, of course, that get's made impossible as well.