When desinging the rules for the Ironweld Phalanx I wanted them to feel different to your traditional Freeguild with Halberds, they are more robust and advanced but benefit far less in big units as they spend less time in trained military drills than their Freeguild variants instead relying on exquisite advancements in warfare to keep them safe on the battlefield.

For an army centred largely around shooting I didnt want the Phalanx to suddenly be combat monsters, they are a defensive melee unit that thematically forms a living wall between the oncoming enemy forces and the gunlines of the weld, for this reason they are best when stationary and being charged (as opposed to charging themselves). Adding in the Anchor the Long Lines rule allowed me to reflect the sheer lethality of flinging yourself into an organised line of Weld Phalanx, able to deter oncoming foes from risking themselves in the combat and encourging an enemy to use weaker units to absorb the halberds of the Phalanx.

One of the most common comments I have recieved is that a 4+ save would better reflect their role, however there are a number of factors interplaying within the tome that turns the 5+ save they currently possess into sheer brutal resilience.

To start:
Weldguard Phalanx naturally reroll ones to save from their Cogplate, however they can boost this to an impressive reroll of all saves if they remain stationary and lock their gears in place. A 5+ rerolling all saves is better than 4+ against rend - and only slightly worse against rend of -1 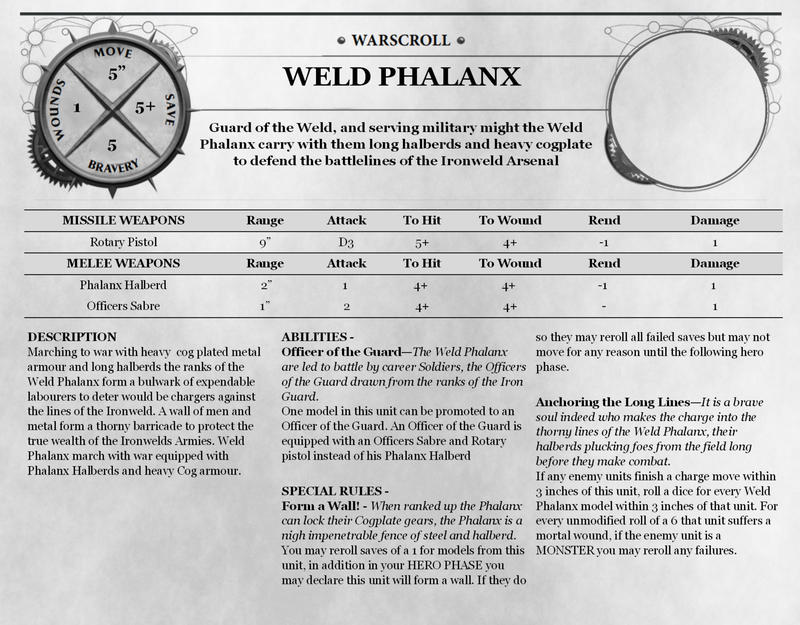 But then we can look at how the tome has elements to boost that save, with synergy at the heart of the Weld we can look at possibly my favourite of the noble houses the City of Midnight who employ extensive Cogwork augements to their populace, this grants them a resilience beyond that of mortal men. With a friendly Ironsworn unit nearby the Weld Guard can benefit from their Heraldry.

And with a Hero nearby more trained in the Military drills of the Weld they can be boosted yet further, able to form a tight knit line of Cogplate to deflect even the most savage of attacks.

The end result of combining these factors is a resilient Phalanx unit comprised of:
4+ Armour Save, Rerolling all failed save
6+ to ignore wounds or mortal wounds inflicted.