Decided to do a quick little tutorial on how I do bases for my Troggoths. Here I'm working on a 60mm base thats for my new Dankhold Troggboss.

Materials used in this tutorial are.

So starting out I just used a pencil to mark the size of my base on the cork trivet and then placed the Troggoth inside the circle marking out where his feet went. Then it's just kinda hacking away at the cork until it looks good. Don't really know how else to explain it

I then add the mushrooms and skulls to different places I used a bunch of mushrooms all around the base and added skulls to the part where the water goes they peek nicely from under the water when we are done. Masking the transition from the cork to base I use small rocks and sand everywhere you can see black parts or the base.

The entire base is Primed Mechanicus Standard Gray and then painted. It's all very basic so I'm not going to start listing all the paints but one tip I want to give is that stipling some Deathworld Forest and Skarsnik Green on the rocks makes a very nice mossy look. After everything on the base is painted I paint the rim black and add my tufts and moss flock. 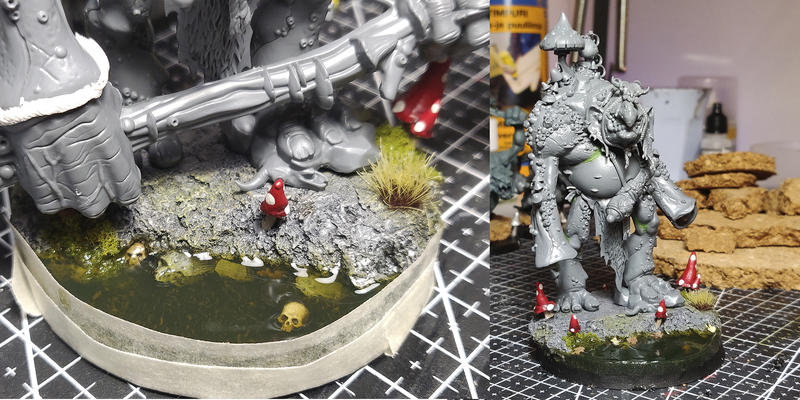 So now we get to the exiting part. Water effects. First up you want to tape the edge where you will be applying your water. You want to make sure there are no places where the water will escape so be patient and put a good amount of tape everywhere. I use Vallejo Water Texture and it's in it self clear so I apply some Athonian Camo Shade in it and mix it in a cup before using a large syringe to apply the water effect on to the base. I usually put around 3 layers of water effect but the tape is on there only for the first one. When you apply your first layer of water effect you let it dry for around 12-15 hours and then remove the tape. You will notice the water has creeped up the tape as it dried and kinda formed a wall in it self around the base. I use this for my next two layers and just fill the base until it meets the edge that dried against the tape. On the third coat of water effect I apply some leafs before it dries so they will get stuck in the water. Now you will most likely get some water effect on the edge of your base but after everything is dry and solid I just go around the base rim with some more black paint and it looks perfect.

And thats how I make my bases! Pretty simple and easy!