Like many others since the inception of Age of Sigmar I have been waiting to see how the normal men and women of the Realms come to be represented, from the citizens of Azyr to the settlers who go on to form Freecities and the refugees trailing in a never ending stream back towards the Golden city as the tides of chaos, death and destruction ravage the Realmscape around them. As I wasnt a fantasy player before Age of Sigmar became a thing i had no pre-existing loyalties to the factions of old, no fond memories of Empire and Brettonians to niggle at the back of my mind when imagining the shapings of the armies of Man to come in the later Age of Sigmar lore.

One of the most interesting elements to me was the seperation of the Ironweld Arsenal, a faction comprised of the heavy artillery and siege engines of old accompanies by engineers and the potential this could open up in terms of how the faction would grow, expand and become a unique force on the battlefields of Sigmar. The concept of soot drenched, smoke belching armies chewing their way through the battlefield, a vertiable force of the industry of man that held little reverance to the will of Gods and Daemons, who trusted in the strength of their own steel and heat of the flames of the furnace.

To my mind the Gunnery Schools of the Ironweld are an empire unto themselves, their vast factory complexes as much cities in their own right seperated into the Nobility of the schools of Engineers down to the peasantry of the labourers. The noble houses each vying for status as the lead with an ever expanding array of contraptions and staggering arsenal of weaponry defining which holds the seat of power and becomes the Guild Patriarch, in this way the constant competition drives them ever onwards, never once allowing themselves to simply sit idle whilst others seize power around them.

The Weld revere Grimnir not as a god but as the peak of Artisans of his craft, a true genius in the refinement of the very art of war. It is his very skill in ever labour that the Duardin and Men of the Weld have come to revere, seeking ever to improve their craft that they might create a weapon worthy of the Duardian Mastersmiths attentions.

The peasants are a dour class, functional clothing long since having been stained a shadowed black by the coal that has become a key pillar of their daily existance, the volatile nature of the machinery often claiming the lives of dozens in the name of progress. Those who are not killed are often maimed, their severed limbs replaced with crude beaten metal replicas strictly functional and given none of the workmanship of the Weld's true arsenal. In times of war these peasantry march alongside the armies of the weld, wielding roughly forged metal bucklers alongside black power or bladed weapons to protect the Guilds arsenals.

The Nobility are a breed apart, each marches to war with their own personal armoury from their families artificer forges. From smog belching metal steeds and ornate battle tanks to the lumbering battle armour of the Ironsworn Templars the very act of war is as much a way of advertising their own Guilds wares to would be buyers from both sides of the battle. Those unfortunate enough to be injured are often adorned with complex and beautifully refined enhancements to further embellish the legends of their own noble house.

Weld Arbalesters
Though lacking the status and wealth to carry true weapons of the Weld, the Arbalesters march to war equipped with blackpowder laced bolts and heavy crossbows, able to launch volleys of devastating explosives down the field. Lacking in the accuracy and refinement of the Nobilities weapons these soldiers exist as much to sow panic in an enemies ranks.

Weld Riflemen
The simplest of black powder weaponry are common place in the mighty forge cities of the Ironweld, those tasked with guarding the vast complexes carry with them longrifles to pick out targets at range. Though simple in design they are suitably devastating in a volley to deter would be thieves and spies from their charge.

Weld Phalanx
Marching to war with heavy plated metal shields and long lances the ranks of the Weld Phalanx form a bulwark of expendable labourers to deter would be chargers against the lines of the Ironweld. A wall of men and metal form a thorny barricade to protect the true wealth of the Ironwelds Armies. 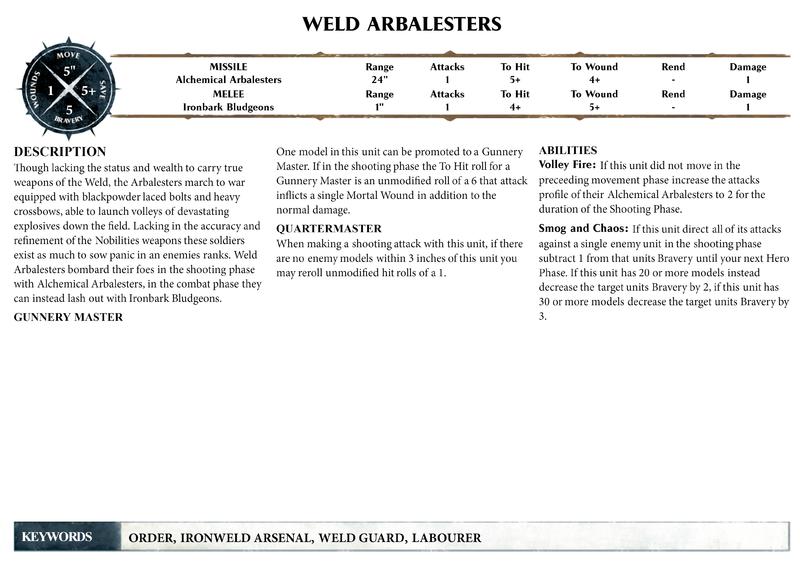 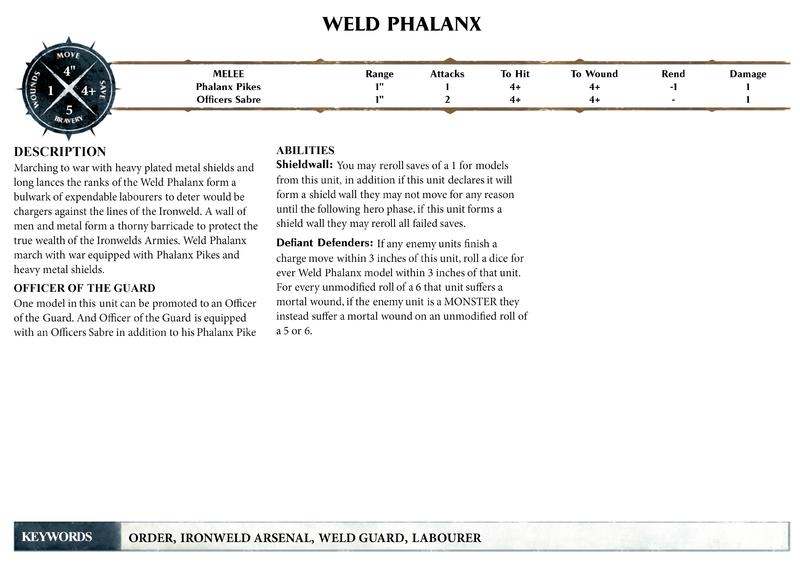 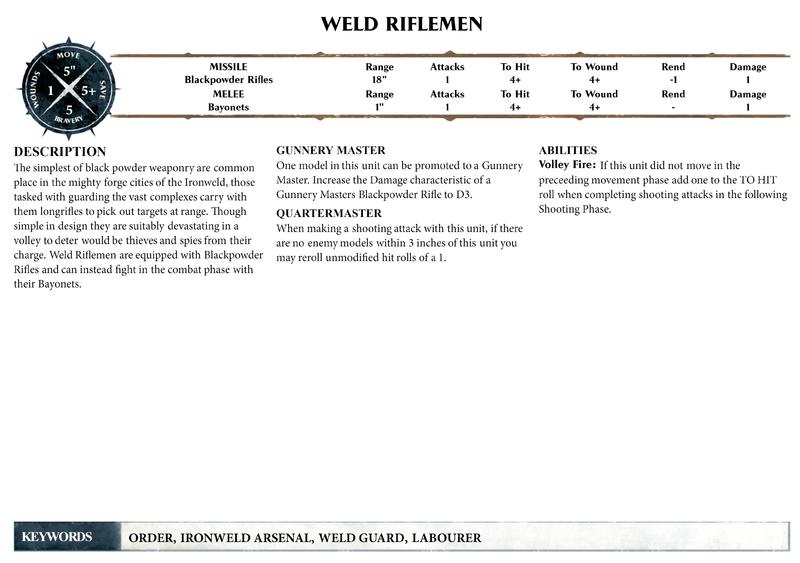