With the mortal portion of my warband on hold, and there is a possibility of getting new models for them soon anyway, the daemons of Slaanesh take center stage. I find myself in a bit of a quagmire for character ideas, as while Lystroth, and his cohort, can indefinitely crusade for glory and power, coming into conflict with all manner of internal and external opposition, daemons are more like forces of nature and make for better antagonists than they do protagonists. You could certainly propose that the different hosts of Slaanesh indicate otherwise, but the daemons of these hosts are still only acting within the parameters of their creation. This fact is something that's kept me away from playing daemons for a long time, actually.

There are two ways to circumvent this narrative issue, as far as I can see: an exterior antagonist or conflict within to Nagh Kheitain Khyrkanashaith. Lacking a creative partner in his endeavor, though my wife will be playing Daughters of Khaine, I will need to create my own exterior antagonists. I'm not entirely opposed to doing that, but that takes the locus of the army's narrative away from the army itself. Instead, I will aim to make the daemonic heroes in the army foils to the mortal heroes, as well as a gauge of their favor with Slaanesh. While daemons are individuals, they are still an extension of their creator's will and aspect.

In modeling terms, my wife purchased a box of Daemonettes for my birthday, and I'm about halfway through it. I paid particular attention to the Alluress, emphasizing her female side and using perspective to foreshorten and obscure her claw and face when looking straight at her. I noticed that the command models, as presented in the material, favor more hair and a humanoid body, where the lesser daemonettes have lack hair and are more monstrous, and took it for my own. Once I get onto painting, I'm going to also keep to the "official" look, save for shifting it a bit more toward purple and fleshy pink.

Next up will be a short story further detailing my theoretical mortal heroes, and their first gift from She Who Thirsts. 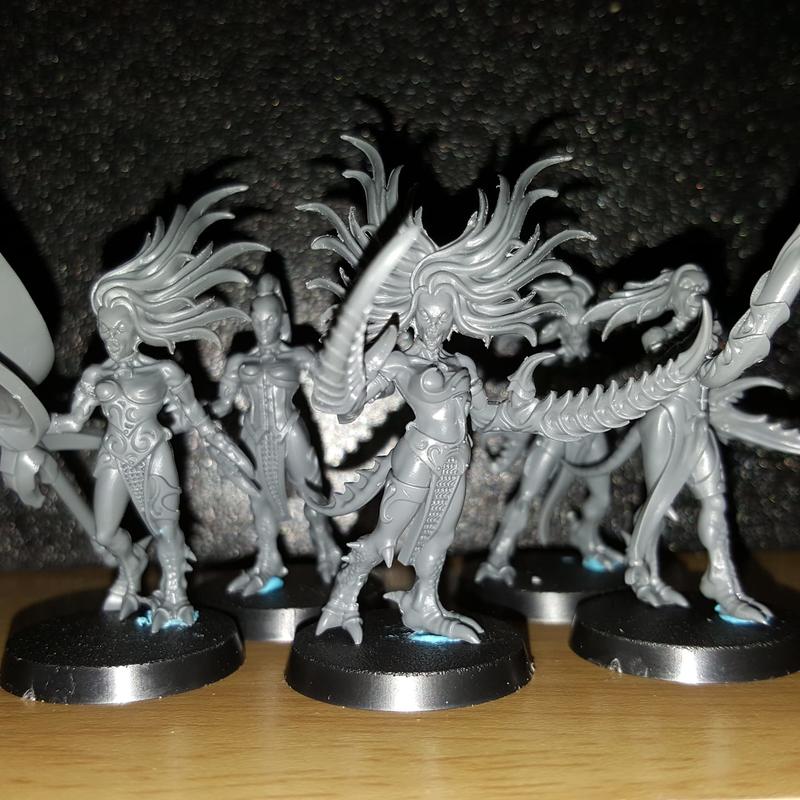