So here's a light hearted faction focus for my Suneater tribes for AoS 2.0

Its time for another Faction Focus today and one I'm sure all of me has been waiting for! We'll be looking at who the Suneater Tribes are, with tactical insight from "Totally not me wearing a different hat" along with how they'll evolve into Age of Sigmar Second Edition... 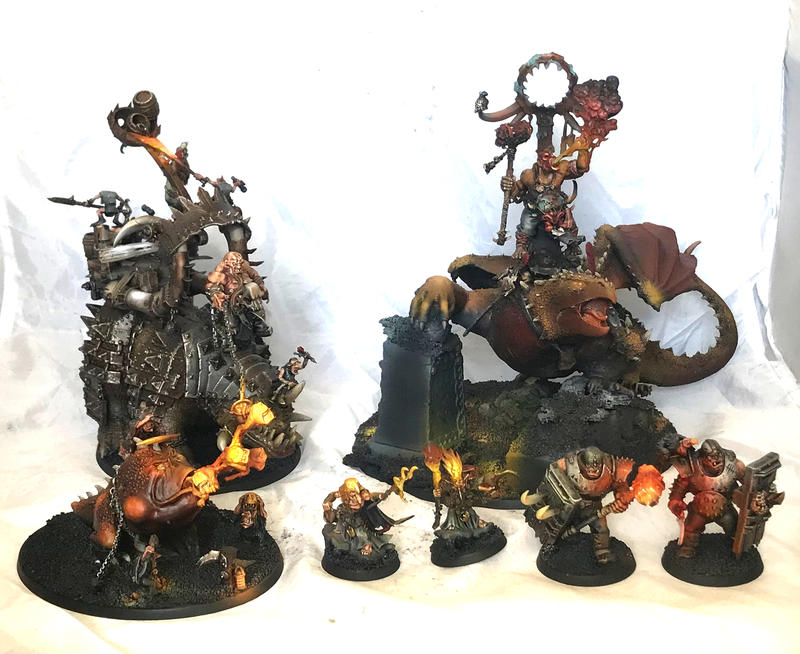 WHO ARE THE SUNEATER TRIBES
Fanatical, obsessed and enraged the Suneater Tribes are the city burners of the Destruction faction, they are ruled over by Ogor Prophets who play the role of Barbaric Kings and Seers of the tribes, driven by the will of the Suneater (A Volatile aspect of Gorkamorka) to burn the cities that seek to bring order to the wilds of the Realms. The Suneater tribes are an enemy of Sigmars own making, a result of his armies being left to enforce their own concepts of civilization without restraint across the realms, conquering tribes who would otherwise have taken only their fair share of meat and lives from weaker races. The relentless expansion of Order cities pushes the tribes to the edge of extinction, and in this moment of cataclysm a mighty Prophet walked forth from the blasted deserts at the edge of Ghur, a living avatar of their Gods firey temper.

To the Suneater tribes every city in the realms is a taunting reminder of the dominance that Order sought to show over their people, it is a blight on the face of the Realm, they believed that when walls are broken and shelters burned the natural order of things will resume, with Ogors (and their grotkin) resuming dominance over the weaker man-things of the Realms. The Suneater tribes fiery temper is matched by their abundance of pyrotechnic weaponry, wielding flame as easily as blade or club in their onslaught, they bring what few other destruction factions can... the ability to break wall and burn fortress. To this end they are often slower moving than many of their destruction kin but make up for it with a plethora of ranged weaponry and a first for destruction: Priests.

A Suneater tribe migration is a literal scar upon the realms, hundreds of miles of woodland in Ghyran is now little more than a blackened wound referred to as "The Scorch" where a rogue Suneater migration was eventually brought to a halt by a combined Order alliance. Whilst the Suneaters themselves were destroyed the wound they left on the realms has yet to begin to heal, either through intense heat or magical mean no seed will take to the burnt soils they left in their wake.

PLAYER PERSPECTIVE
Ricki-in-a-Hat is one of the most devout players of the Suneater tribes, more to the point is definately not me in a hat giving the tactical overlay of my custom faction, at all.

Interviewer: So what attracted you to the Suneater Tribes
Ricki-in-a-Hat: Well first of all thanks for having me Tim..

Interviewer: I'm not Ti...
Ricki-in-a-Hat: Good story Tim, I found the original factions of destruction to be lacking something, they all encapsulated the wilds of the Realms but it lacked that emotional aspect that I find ties me better to collecting and playing a faction. There is a visceral rage to the Suneater tribes, they are not acting without reason but avenging centuries of abuse and onslaught by the cities of order, in their minds they are the good guys here, fighting to reclaim lands and lives lost when Sigmar decided that his armies would take what was theirs in the name of "Good"

Interviewer: So what're your tips for Suneater Tribes players?
Ricki-in-a-Hat: Stoke the Pyres, the inferno marker ability is a fantastic way of delivering massively impactful abilities on a turn by turn basis, all from the hugely thematic concept of burning down the terrain that makes up the battlefield (could anything be more destruction?) You'll want a couple of Gothi Fyri priests using their Cowardly rule to avoiding incoming fire to stoke pyres across the battlefield. Most Suneater Tribes units are better when near, or targetting an enemy near an Inferno Marker, use their to control the battlefield either by having troops Firewalk using the Waaaghkart or delivering an unrelenting artillery bombardment.

Interviewer: What advice would you give to a new Suneater Tribes player?
Ricki-in-a-Hat: Start with a character, these are the lynchpins of the Suneaters story, every tribe is shaped by the will of its Volsungr prophet from their fighting style, appearance all the way down to their motivations. In developing your tribal leader you'll understand and connect better with the rest of your force. Some will be led by Ogor centric Volsungr who trust the Gothi Priests as far as they can throw them (which admittedly is still pretty far, especially if you crush them into a ball first) so will focus on Gullveig and the mounted Ogors to deliver much of their blow. Others might listen a little too much to the Gothi whispering in their ears, a force comprised of cowardly Grots with minimal Ogors present but bringing in much more artillery. 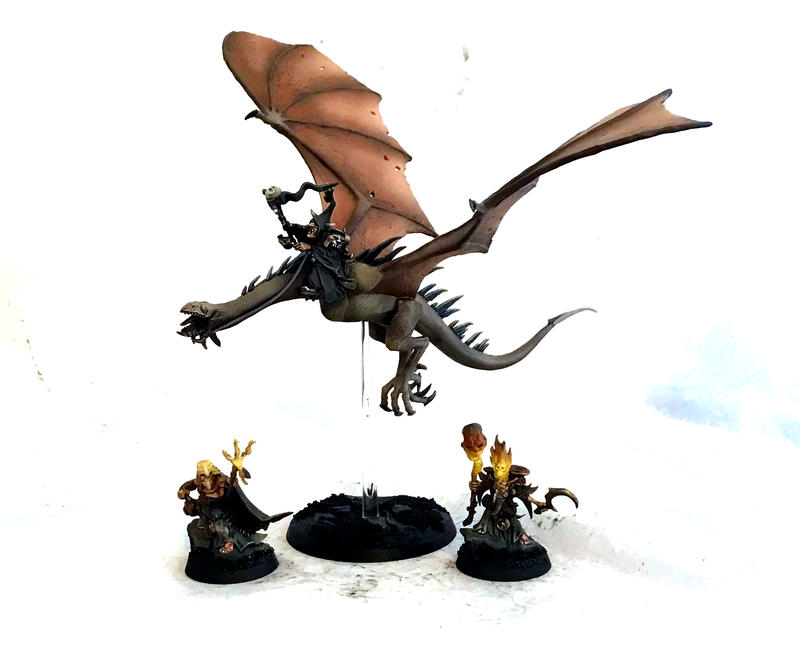 IN THE NEW EDITION

So GREAT NEWS... I'm still writing the Battletome (see procrastination is for WINNERS), what this means is it can evolve and change with the new edition, first of all this faction packs in some of the most reliable combat Wizards in the game with a Volsungr on Magmadrake packing in over 20 wounds and enough mobility to delivery him where you want your endless spells to originate. Your Inferno Marker will also take on new life in AoS 2.0 as the excitations of flame elementals focuses around the Pyres of the Suneaters, you'll have to decide whether to use your Pyres to enhance your fighting capabilities or extinguish them to unleash volatile and capricious flame elementals on your foes and drown the battlefield in living fire.

Points will ofcourse be reviewed as we enter the new edition, with a couple of units already seeing points drops (Slatr Warbeast), but moreover whilst over factions relish the new "Look out Sir" mechanic your Gothi priests take it a step further with their Cowardly rule keeping them entirely safe from enemy shooting when hidden near other Suneater units.

You'll also be able to take advantage of some of the massively thematic new relics from Ghur and Aqshy, realms the Suneater tribes have the bulk of their Migrations in, this way you can tell the tale of your tribes conquests through treasures captured along.

Combining Pyre Markers and your Waaaghkarts ability to launch units up the field you'll be able to target enemy characters seeking to hide in the backfield, or bring your slower units to bear in the prescence of your Volsungr on Magma drake, locking down the enemies most potent units with your own viscious combat units and controlling the battlefield from an early stage. 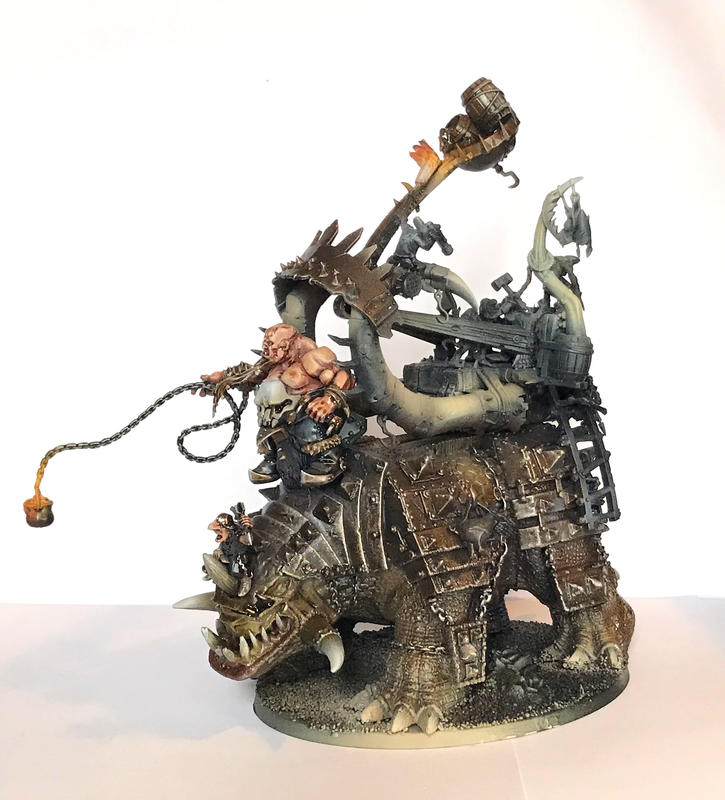 The Suneater tribes and their world burning migrations are looking set to bring the cities of Order to heel in the new edition...