Jump to content
It was with great excitement that 7 Legionaries stormed the battlements of Warhammer World. Ben Raven (Quad Flappies) and James Grant (Kroaknado) had brought the infamous Battle Wagon to stay in.... Rob brought Dronestrike and a pounding hangover from a football game/beerfest the day before. Hugh had Griffon Spam Freeguild. Max had his well painted Nurgle and jumped on the Livestream game one. Tom brought some Mixed Order filth. That leaves Archaon:

After a year of experimentation with Mortal Tzeentch and much contemptuous laughter towards my use of Chariots from Rob, I had integrated Archaon into Fatesworn.

The basic idea was that Archaon with Infusion Arcanum was pretty choppy (and autokilled big heroes) and also very tanky with Mystic Shield, Shield of Fate and Eye of Ed Sheeran. I filled the 10 Units in the Battalion with chaff - who also benefit significantly from the rend provided by the Battalion - Maras and Chaos Spawn. Any Daemons Summoner with Command Abilities would also have success to their command abilities - Double Pile in on Archaon or +1 to cast and unbind.
An early prototype tanked at Heat One (terrible dice throughout), but the list benefitted from some tweaks particularly the addition of a second Gaunt Summoner for redundancy/more magic. In this form, the list carried me to a first place trophy (and a first ever trophy) at Winter Waagh after a hard fought game vs John’s Khorne (also using a Gaunt).
Final tweaks were made by adding a fourth Chaos Spawn to bulk the summoning pool up to 580 (enough to summon the Chicken and the Keeper!). With some reluctance I dropped the Chaos Sorc Lord - even though his rerolls Spell makes Archaon vaguely reliable rather than derptastic, his 160 cost is brutal.
Archaon (Infusion)
Gaunt (Shield of Fate, Wellspring)
Gaunt (Glimpse, Soul Draught)
3 x 10 Maras
4 X 1 Spawn
580 reinforcements pool
Wellspring is particularly useful for guaranteeing spells and saving on DD. Typically I would use (say) a 3 DD to cast Mystic Shield - adding one from the Gaunt’s Blot and then rolling the other casting dice and rerolling a 1. If it was a 1 I would usually burn a 2 or another 3. The 9” bubble usually catches Archaon and the other Gaunt.
The default summoning option would be the Balewind, Chicken, backed by 10 Pinks splitting into 10 Blues for 570.
Game 1: Chris’s Ironjawz - Starstrike
Chris had opted to max out his allies choices with 4 Rock Lobbas (which I’d also considered in the past). These posed a major threat to the Gaunt Summoners, which forced me to go first with some reluctance - as against a more melee oriented list I could have played for the double.
I deployed Archaon slightly off to the left. Chris’s army was heavy on Ardboyz and Pigs and lacked a cabbage. He cleverly deployed away from Archaon. 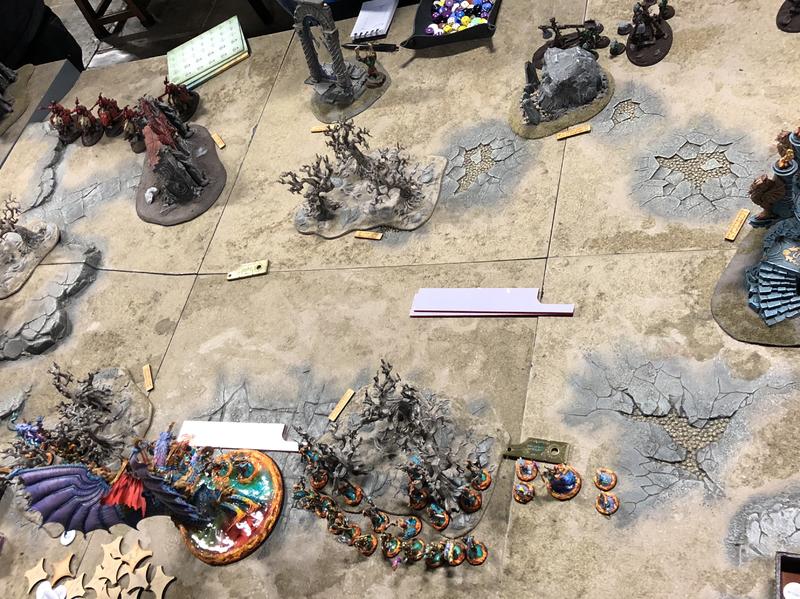 Battleround 1
Fixating on the bonanza available from sniping off low bravery crew, I made a painful error by miscalculating my summons in turn one. Having brought on the LoC, Herald and Pinks - I lacked the points for the Balewind. This cost me the chance to deplete the Ardboyz before they engaged and to lob in a cheeky Battalion Arcane Bolt. 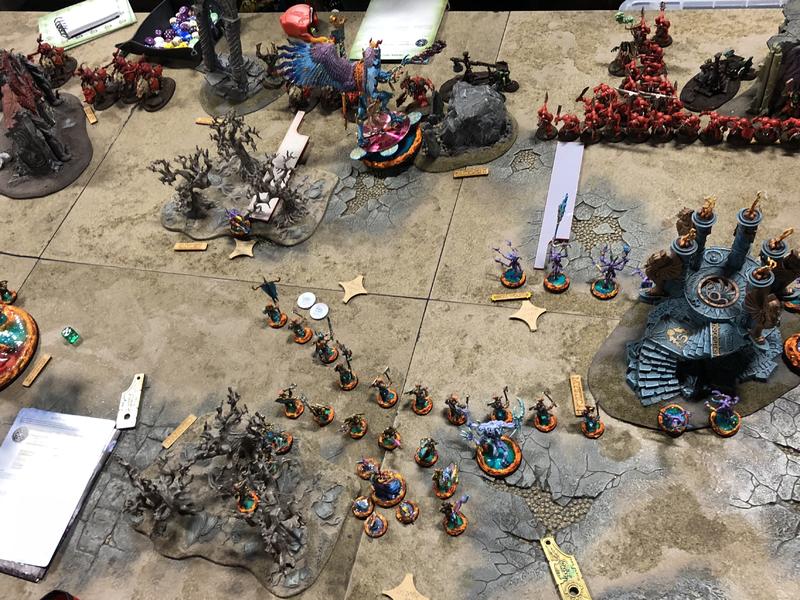 Things got rapidly worse as the LoC failed the Gateway casting roll, which would have threatened the Megaboss. My spells killed one crew outright, but only chipped off the odd crewmen from the others.
Archaon went left - my thinking being that he could mop up the low damage Pigs and secure the entire left flank before turning inwards.
I advanced a line of Maras, who shielded the punchier Spawns.
Shooting failed to kill any more crewmen. I had just enough DD to charge the LoC (fortified with Mystic Shield and Shield of Fate) into the Megaboss. He bounced pitifully - doing 2 wounds. In response, the Megaboss derped his own attacks.
All the Battleshock tests were passed and I was in a grim mood already.
Chris responded by throwing his Ardboyz forward, advancing the Pigs on my left.
Shooting chipped wounds off one of the Gaunts.
The Chicken clung on. 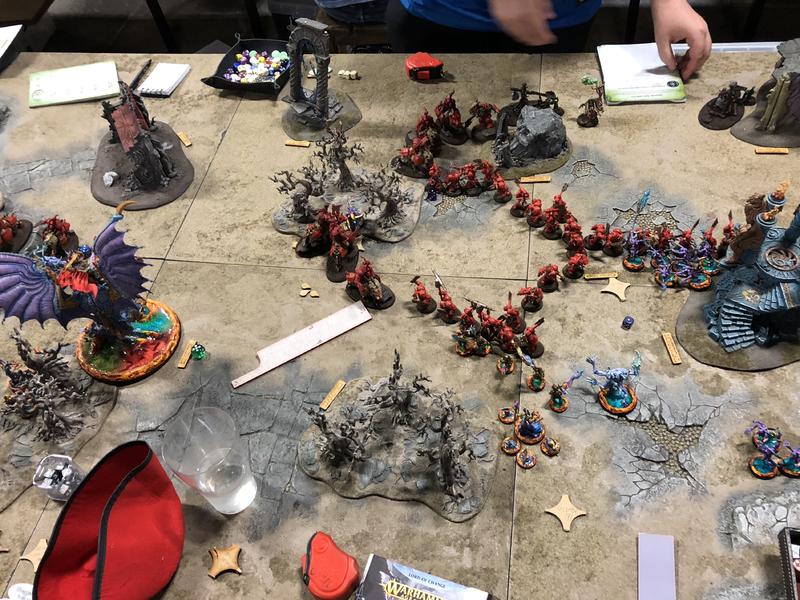 The Ardboyz split their attacks too thinly so the Pinks survived. The Chicken survived the Megaboss’s attacks and was able to hit back - dropping him to 2 wounds. The Pigs cleared up elsewhere, the Maras melted wholesale. Battleshock returned some Pinks.
The comet landed by the left Pigs. Chris won the initiative, which cost me a round of spells with the Chicken. Things went bad to worse. The Ardboyz were delayed by the Pinks, but the Pigs rammed into my centre clearing out the Marauders and a Gaunt Summoner.
Chris scored 2 points.
My remaining Gaunt Summoner blasted the Ardboyz. Meanwhile Archaon managed to get in combat with both units of Pigs and wiped them both out including Battleshock, which was enough to score back 2 points.
The other comets dropped - my one central and Chris’s one in the far right. Chris won the initiative again. This cut off my last chance as Chris mopped up my remnants. A Major loss to start against Ironjawz. Truly grim! 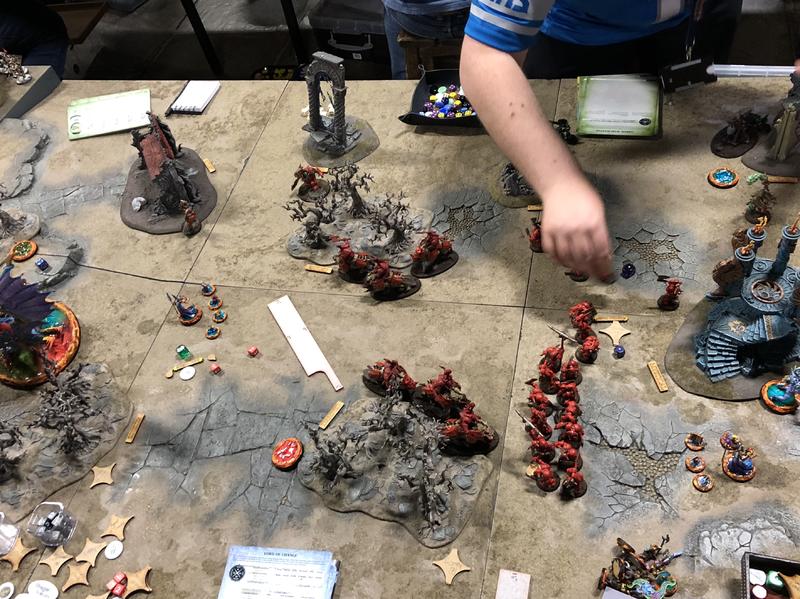 With hindsight I should probably have just lobbed in Archaon with the double pile in and outfought/tanked the Ironjawz in the centre. Chris lacked rend other than the Catapults. The failure to allow points for the Balewind had been costly and I wouldn’t allow that to happen again.
My club mates had had mixed fortunes. Max had been robbed by the constellations on the livestream - the stars landing on the Toads of the talented painter Adam Elford. Rob had also lost - not helped by his booming hangover. Hugh didn’t start well either. Ben, Tom and James had fared better.
Share
Followers 0