This Sunday afternoon I played my friend Laurie at a couple games of Age of Sigmar. I've not quite got the hang of this game yet, there are so many synergies that I still struggle to remember. I need to spend some time reading the warscrolls. 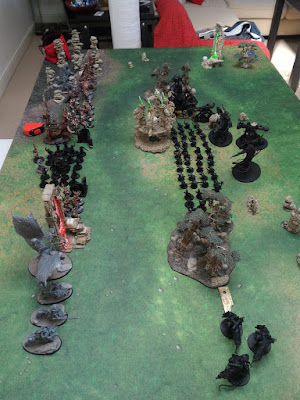 The first game of the evening was The Shattering from the Godbeast book. I played the Breacher army, while Laurie played the Obstructor's. I took my Khorne Bloodbound as I'm a bit tired of playing Slaanesh.

The objective is for me to get 33% of my models across the board by turn 6. Laurie deployed all his units up to the half way point. I took first turn, and pushed everything forward seeing as I don't have much shooting trying to get in to combat as soon as possible. However, my Skullcrushers were stupefied, and 5 of the 6 units I charged failed 6"-8" range even with the Mighty Lord of Khorne's ability granting 3 dice and picking the highest 2. 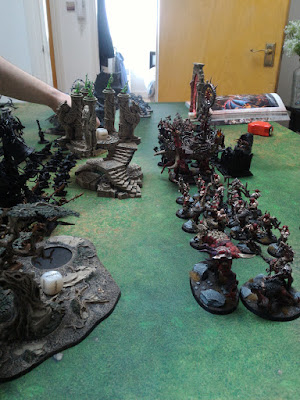 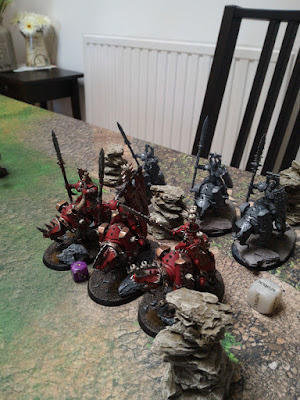 Laurie then proceeded to mortal wound me off the table, starting with my Bloodcrushers, the Bloodsecrator and taking many wounds of the Bloodthirster. Luckily the Mighty Lord of Khorne only took 4 wounds and survived another round.

I won the roll for second turn, and finally managed to get my units into combat. Sadly things didn't go to well, my dice were terrible and I failed to kill of anything of worth. 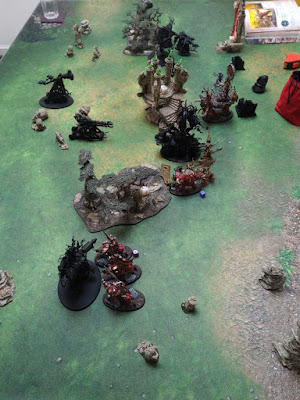 End of Laurie's second turn, and all I had left were the Khorgorath, the Warshrine and 3 Skullcrushers. We called it game here as I didn't have enough units alive to complete the mission.

Laurie's army has many units that can deal Mortal wounds, the warshrine does give me the ability to save all wounds on a 6, but it doesn't amount to much when you can't roll 6's. I think my biggest problem is not being able to deal mortal wounds, or shoot from distance.

Skull cannons would help with range, but don't deal many mortal wounds. I would need some Wrathmongers to help deal more damage, and possible more Blood Warriors over Bloodreavers. But no purchases until I've painted what I have.

The second game I chose to use my Slaanesh Daemons, first time since I completed painting them all. 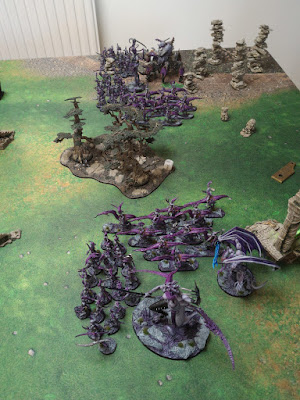 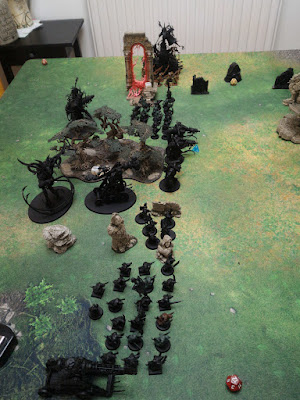 This game we played On Thin Ice, from the Balance of Power book. The battlefield is split into six pieces, each has 12 wounds, and a random section takes 2D6 wounds and adjacent tiles take D3 wounds. 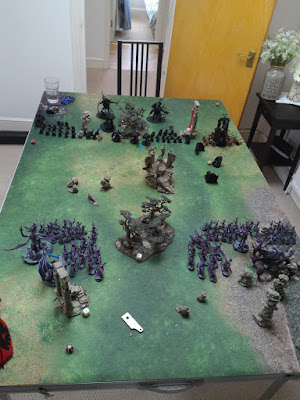 I chose to move as much as possible to the right flank and run across there. 20 Daemonettes, a Herald, the Daemon Prince and 1 Keeper of Secrets moves across the precarious left flank. The Keeper casts Ice Bridge, which means she's immune to ice field failing. I can't do much more than move everything forward.

At this point, Laaurie points out that he has so many models that put out mortal wounds that he could collapse both sections with ease. And proves it with rolling the dice. We decide to remove this part of the Battleplan, and say that it can only be damage by the random roll at the beginning of each turn.

He Skitterleaps the Deceiver across the board behind the Keeper of Secrets on my left flank, and puts several wounds in to him. His warmachines add some wounds to various other units. and the Plague Monks on his right flank moves up to engage and hold up my units on the table that looked like it will fall in to the sea at any moment. Nothing else happens with most my units out of range.

This roll sees the table section I deployed on the left collapse in to the sea, I've been rolling 1's and 2's all day but someone managed to roll an 11, with the wounds it took the previous turn meant it disappeared. The crucial roll came when rolling the adjacent damage to the section on the left with My Keeper, a Herald, 20 Daemonettes, 1 Deceiver, 20 Plague Monks and 5 Plague Censors. I rolled a 4 on the D3 and it was reduced to 1 wound!

Laurie won the roll of, and started to dish out some damage to my left flank. He decided to leave the Deceiver where it was and took the Keeper of Secrets to 1 wound with it's shooting and magic. His warmachines took some more wounds of the Daemonettes and a wound of the Daemon Prince. The Plague Monks made it into combat with the Daemonettes. He chose to go first with the Plague Monks, and they killed many Daemonettes, this meant I could at least get one attack with the Keeper of Secrets.... Who whiffed, and did just 1 wound to the Deceiver. Keeper inevitably dies to the Deceiver.

My roll on the Time of War chart see me roll Jotunberg Mists. I use this to remove his Storm Fiends from the table, in all the games we've played they've always done the most damage. I expect the left flank to fall away, so leave it be, I fly the Daemon Prince forward to deal with his Warmachines, and move my right flank forward to engage. The Daemonettes on the right flank fail their long charges, but the Seekers rush into combat, the other unit of seekers hold back as reserve. Daemonettes on the left flank hold their own against the Deceiver, Plague Monks and Plague Censors, the Seekers start reducing the Plague Monks in the centre, and the Daemon Prince destroys the Plague Catapult.

Turn 4, my other section of deployment fell in to the Sea, we are now playing on a 4'x4' table. Laurie wins the roll off, and is unable to bring back the Storm Vermin. again he leaves the Deceiver attacking the Daemonettes. Thanqual moves around the forest and takes the Daemon Prince of the table. The Screaming Bell takes a few Daemonette models of the board. Daemonettes on the left flank take out a few more Plague Monks but finally succumb to the Deceiver, Monks and Censor bearers. Seekers and Plague Monks in the centre continue to fight each other to a stand still.

My turn 4, and I manage to finally get everything else in to combat on the right flank. Daemonettes and Soul Grinder attack the Screaming Bell taking it down to a few wounds. The Stormvermin and Daemonettes trade blows and the Plague Monks are taken out by the remaining Seekers.

Turn 5, another section of the battlefield falls in to the sea, taking with it, a squad of Seekers, several Daemonettes and the Soul Grinder. It also takes the adjacent board section with the Deceiver, PLague Monks and Censors. We've been rolling super high on the damage to the battle field all game, I'm sure they are not supposed to all fall in to the sea. At any rate, we're left with 2'x2' section of the board. It was looking good until that happened.

I won the roll off, and removed the Screaming Bell, and reduced the Stormvermin to 2 models, the Plague Priest was left with 1 wound and the Monks were all killed.

Laurie's next turn see's the Storm Fiends remain off the board and Thanquol move up and kill all but 1 Seeker, The Plague Priest is killed as are the rest of the Stormvermin by the Daemonettes. Thanqoul charges in a removes the rest of the Slaanesh army.

A really fun game, that swung back and forth I had better luck with the Slaanesh than with the Khorne but still lack any mortal wound dealing units. The Keeper of Secrets looks much scarier than the rules are. I hope when the redo Slaanesh with the Aelves that they get a new model like the Bloodthirster with updated rules. The army could do with some Chariots, but they are a pain to transport, and I'd like to keep the Slaanesh Army to 2 carry cases.

Forgot to take photos again during the game, so apologies for the wall of text.