It's quite long battle report, but there is a summary at the end.

Pre-battle strategy: Opponents hitting power was mostly on the left flank, so I decided to tank that side and destroy the other to get points by burning the objectives.

1st ROUND
Slaves: I gave initiative to Slaves. They ran forward, quite close to me, player understated the damage ouput of buffed up Mournfangs and Stonehorn. Hellcannon bombarded Thundertusk and Stonehorn, missed Stonehorn, but giving 5 wounds to Thundertusk (and he dropped in damage table, making his Ice Blast damgage D3 and making him useless). Collected 0 points.

Beastclaw:  Butcher Mystic Shielded Stonehorn and took damage from cauldron. Stonehorn gave his command ability to reroll charges. Everwinter gave reroll saves of 1. Everybody charged forward. Stonehorn got +1 to hit for being close to Ironjaws, charged Chaos Knights, did 3 mortal wounds and killed them. 4 man unit of Mournfangs charged Chaos Hounds, did 20 wounds and almost killed the unit. +1 to hit from being close to Ironjaws helps a lot. 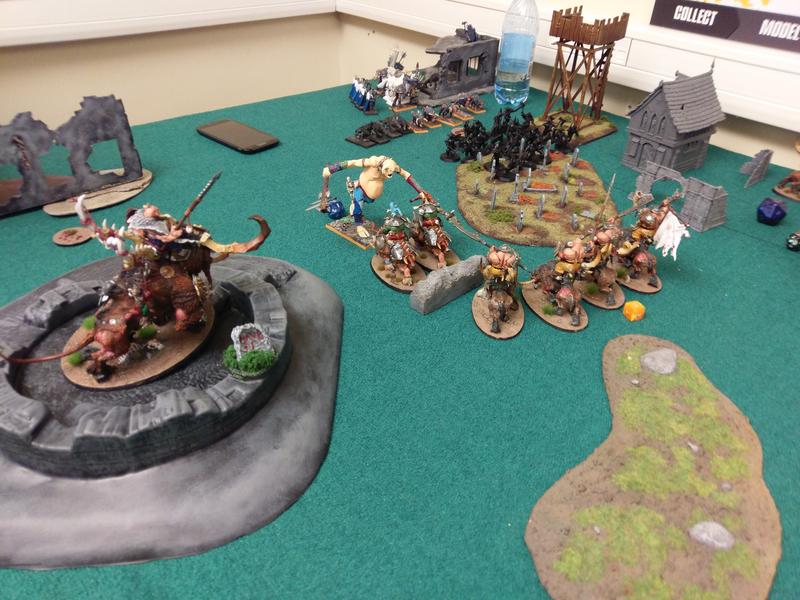 Gruntas made 5 wounds to Gargant, Gargant killed one Grunta.

On the other flank things didn't go that well. Gruntas didn't make the charge, but 2 man Mournfangs made a long one. That allowed them to stay within 6 inches of Gruntas, getting +1 to hit. I rolled pretty well, killing few Chaos Chosen, but one Mournfang died.

2nd ROUND
Slaves: as is norm, I lost initiative roll (and all following rolls). Hellcannon bombarded Thundertusk and Stonehorn, who halved the damage and got only 2 mortal wounds.

Gargant killed one Grunta, wounded the other.

Chaos chosen killed lonley Mournfang, charged Thundertusk, who magically survived on 1 wound. They came too close to Gruntas, I piled in and killed one Chaos Warrior.

Mighty Lord charged Stonehorn, did 2 damage (Mystic Shield helped a LOT). Stonehorn failed to kill him (yup, missed most his attacks, did 3 wounds). Fortunately the reality didn' split and Stonehorn remained on board. Collected 1 point.

On left flank Thundertusk Ice Blasted Bloodsecrator to death, killed one crew member from Hellcannon with Vulture, missed with crossbow. Gruntas killed some Chaos Warriors and even Thundertusk killed one. Collected 1 point.

Beastclaw: Butcher failed with Mystic Shield, but gave +1 to hit to Stonehorn. Which was VERY helpful, because later Stonehorn dropped on damage table, but due to getting +1 from Butcher and +1 from being close to Ironjaws mitigated that. 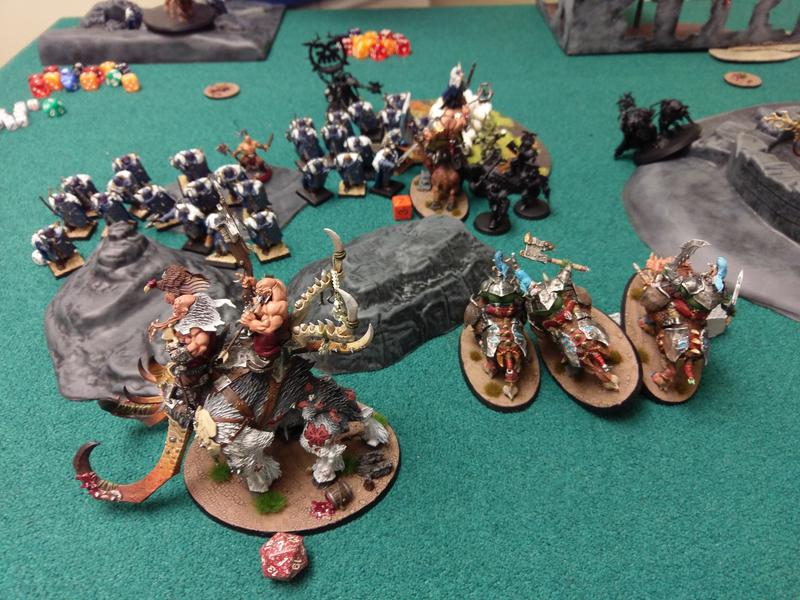 On right flank Mournfangs burned an objective, collected 3 points. Gruntas burned another, collected 3 points. Stonehorn charged to left flank, but was still close to one Grunta and got +1 to hit. Made 1 mortal wound for charging, killed Chaos Chosen. Exalted Hero gave him many wounds, 6 remained (really missed the Mystic Shield).

Now I used the once per battle ability from Battalion and piled in second time. Killed Exalted Hero and most Chaos Warriors.

Collected 7 points this round.

4th ROUND
Slaves: Chaos Warriors moved to my objective, Hellcannon bombarded Stonehorn, but missed one shot and made 2 wounds with the other. Chaos Warriors couldn't kill Stonehorn. And we called the game, as it was impossible for him to get enough points.

I like the battalion - keeping Ironjaws and Beastclaw within 6 inches is very restrictive, but +1 to hit is massive. IF you get the charges, Mournfangs with +1 to hit, mortal wounds from charge, damage 3 are simply great. However, 2 man unit actually underperforms even with +1 to hit, so keep the on 4s. The second pile in can be great - it's usually better to do it as soon as you have charged (because later you might not get to charge at all, but this time it was a bit pointless, as only Gruntas wound have attacked. And being able to do that later with Stonehorn was pretty decisive.

Now Stonehorn is still not worth his points. 460 point monster who even with +1 to hit makes 3 wounds... what? Before the game I actually thought to take 2 additional Mournfangs instead of a Butcher, but he really is a must. Without Mystic Shield Stonehorn dies like a fly and little chance to get +1 is also useful. Especially late in the game, when Gruntas are dead and Beasclaw won't get +1 to hit.

Gruntas felt quite unimpressive, but actually I rolled really bad with them - mostly 2s. So I just have to try them put more.

Thundertusk was a waste. Almost complete waste of 360 points. They are great if opponent has no access to ranged weapons, but Hellcannon's range was 48". And he comes down on damage table so fast that you only get to Ice Blast for d3 mortal wounds. In melee he's bad. Missile weapons are bad. Vulture is nice to pick some annoying units, but that is also 50/50 chance.

Probably next time I take additional Mournfangs to fill the battleline (or Stonehorn Beastriders), and yhetees to try them out. Maybe Hunter/Skal battalion is better to ambush warmachines.

Or ally in Troggoth Hag (instead of Butcher and Thundertusk) or vanilla Ogors.