I've consistently enjoyed @Chris Tomlin 's events and this was to be no exception. The laboratory doors under the South London Legion were sundered as five of us made the journey west to sunny Cardiff - Rob Bradley @leonardas , Alex Clark, Tom Lambert, Ben Savva and I. Two Tzeentch armies, Stormcast, Darkling Covens and Clan Skryre made quite a concoction.

There were 80 odd opponents and we had the new GHB 2017 to sink our teeth into. I was happy as my list had actually gotten cheaper - Acolytes, Sorc on Manticore and Fatesworn, as well as some of my summoning options like Plague Toads. 20 Bloodletters had unfortunately gone up to 220.

We would be playing the new Battleplans. Talk of the forums and amongst us was about the horrific quadruple Warshrine stacking 4 5++ ward saves on 90 Bodies. Fortunately our fears proved to be somewhat overblown.

Rather than going down the well-trodden paths of the Changehost and Skyfire Spam, I decided to blow the dust off that long-forgotten mechanic of summoning - which Tzeentch excel at.  I took a 390 summoning pool!

Fatesworn rend turns the mediocre Slaves to Derping into semi-decent combat units (they would have been better had I remembered that Marauders get +1 to hit on a 4+ and +1 to wound on a 6+ roll!). The requirement for 10 units is painful - I would much prefer smaller bigger units.

Chariots (despite @Leonardas 's objections - represent exceptional value at 80 points for 7 wounds (near the Liberator 10:1 ratio) - having models that only die if they take 7 wounds is really helpful. Also both chariots get to be champions.

Significantly, Battleline units are not allowed to be under minimum size - which means I cannot get the Ward save on any of the units - this is a shame. Acolytes are and remain utter garbage - 1 attack, 4+ 4+ in both melee and ranged is terrible as is their armour save. I will swap them out for 5 Warriors in future.

The particular combo my list relied on was between Kairos and the MantiSorc. The Mantisorc was very tanky - reroll saves of 1, 4, 5 and 6, then a 2+ save with Paradoxical Shield and Oracular Visions plus -1 to hit him with pew pew from Illusionist. He also carried around the Treacherous Bond spell for Kairos to know off him (like a waterboy). Kairos could also cast the Mantisorc's own spell - Wind of Chaos, which was a more random Infernal Gateway. The standard strategy was for someone (probably the Gaunt Summoner due to +1 to cast with Blot) to summon 3 Plague Toads. Kairos would then Treacherous Bond to them. Kairos would then thrown himself forward with a shoot me sign on his front and get in the way. Once it was my turn again, he would keep up Treacherous Bond and lash out with Wind of Chaos.

I had hoped that the Ogroid would go down in cost, but he didn't - he remains useful as a source of -2 rend melee. He is a beatstick with Infusion Arcanum, but sadly the Windthief was nerfed into obliteration (thanks to Skyfire players - now we have two non-garbage artefacts down from 3) - it should have been amended to only work in our hero phase. I took the double pile in instead, which would be good if he survived a round of combat.

Another theoretical combo was using Arcane Suggestion and Kairos's Oracle of Eternity to guarantee -1 armour save for my turn (it should plainly be until the next Battleround - it's a really bad spell in general due to the random effect).

The Blue Scrubs were quintessential to this list and frankly any Tzeentch list (bar Skyfire Spam). Definitely the MVP.

The other reason for taking Kairos is that after summoning 20 Bloodletter, he could near-guarantee that they make a successful charge with Oracle of Eternity, which was pretty sweet I thought.

I'm glad to say I was way ahead of the pack on #ToadMeta. These are a chore to summon on an 11!

More conventional options were Pinks and Blues, a Daemon Prince and a Herald of Tzeentch - who does the sniper role. 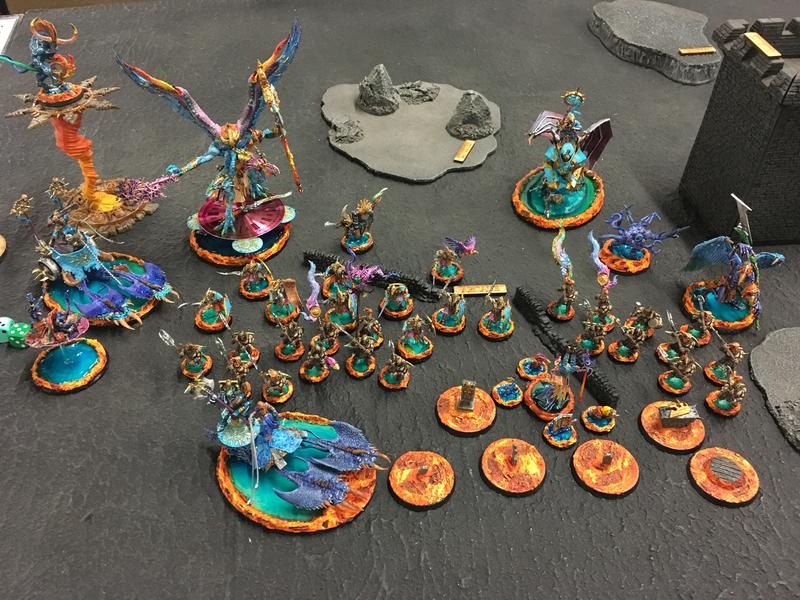 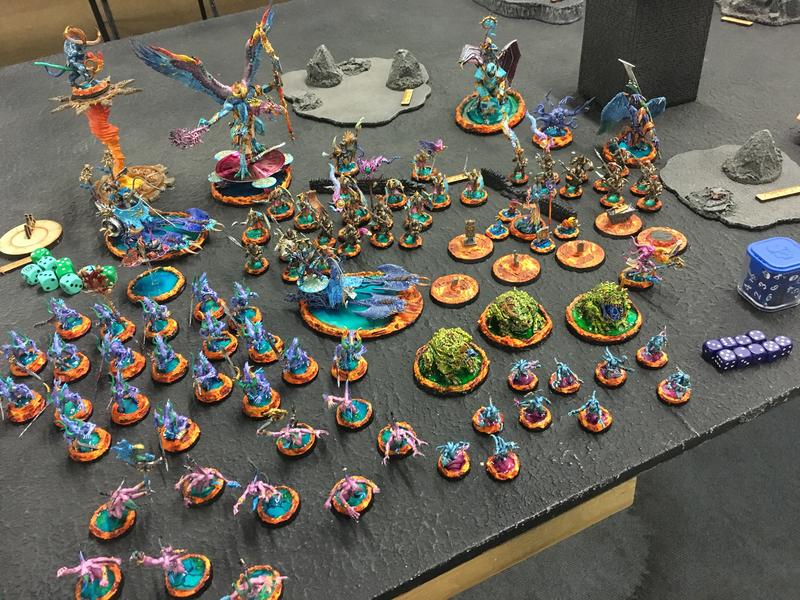 Daemon Buddies showed up out of nowhere

Hobby-wise, this is my best painted army. I was pleased with how Kairos had turned out in particular with his actual clock face floating on 4 disks as a base; and the summoning out of magic water over my traditional lava bases seemed to work. It's certainly a riot of colour. The water effects do take a while and are painful when they go wrong #FloodASaurusRex. I'd used a combination of Glazing, Loaded Brush and Drybrushing on different models. Part way through the army I obtained Vellejo Metal Colours, which are truly a revelation.

There are quite a few conversions other than Kairos - the MantiSorc is a greenstuffed amalgam of a Daemon Prince and a Gorebeast, the Chariots are a kitbash of the Burning Chariots and bits from regular Chariots. The Marauders all have weapon swaps and Tzeentch Shields.