On Friday I made a my actual third game of Age of Sigmar with the Battle of Heroes Event in GW-Wiesbaden.

I wrote a little introductionstory before posting this the first time:

The Blazenhearts had fought for months in Eloni for the local citizens and armys to get them some rest. Doring a patrol, the lords of the Storm experienced through reconnaissance, that troops of the bloodbound got close to multiple places of power to corrupt them. Against the objections of Victor Brightsoul, the Lord Castellant, to wait for the rest of the chamber, Valten Blazenheart the Lord Celestant conforms, after the sighted troops were a small warband. Valten knew that they have to act quickly, so chaos could not determine in the region.

Actually it was some sort of introductiongame because my it was the first game for my opponent. After he only has "normalsized" models I didn't use my Drakesworn Templar, so it was a 500 Point Game with 5 Heroes. So my army looked like this:


The army of my opponent contained the following models:

At first I thought the shop would have a scenario for that event, but after should compromise to a Battleplan. To keep it simple we used "Three Places of Power", because it fits nicely to the event after heroes should hold objectives.

I hope I didn't make an mistake that the marker is controlled by a hero until is is killed or left the 3" range of the marker. 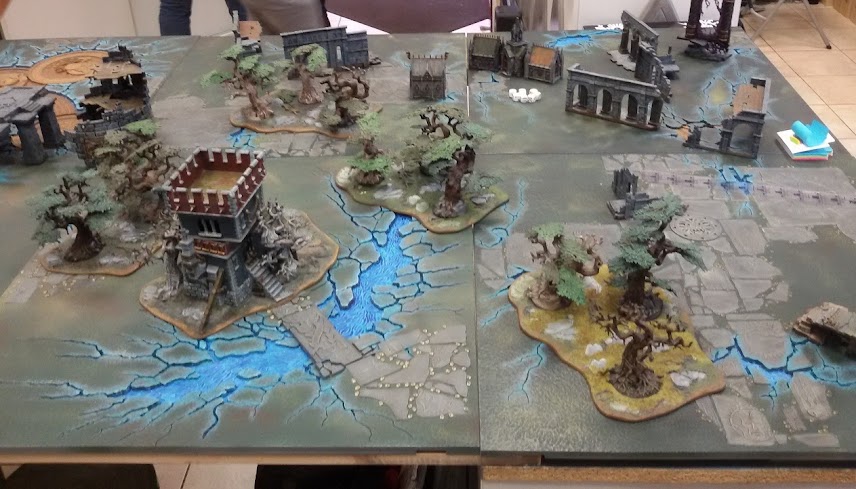 Sadly some of my pictures have a bad quality, because I made them with my smartphone and didn't wanted to waste to much time.

Knight Questor positioned next to the right wood

Lord Celestant left of the magical water, next to the tower 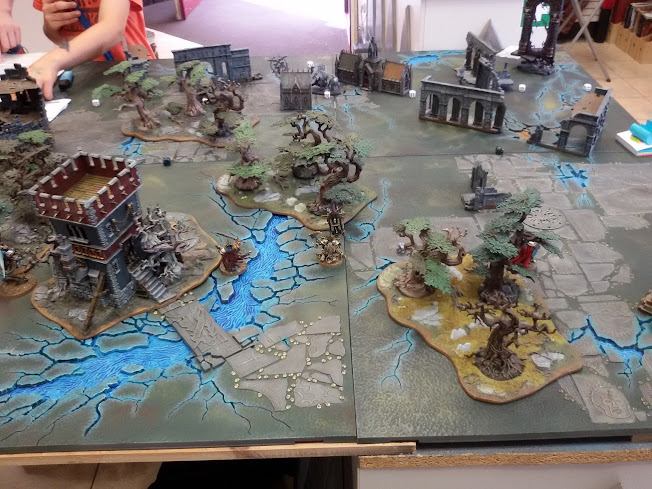 Blood Stoker right to the ruinwalls

Mighty Lord of Khorne and Bloodsecrator behind the mausoleum 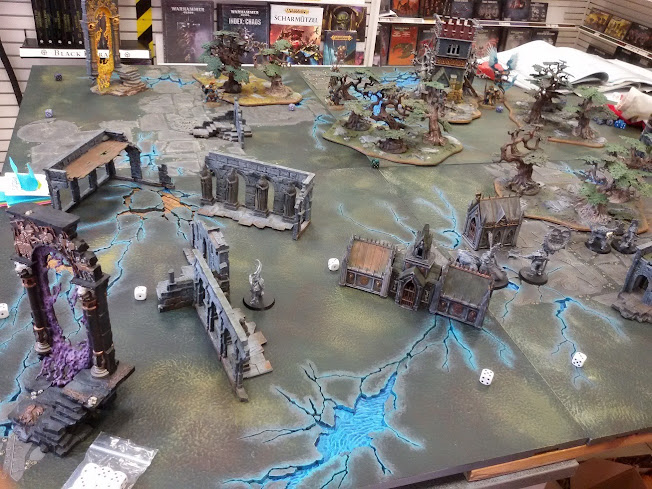 I didn't read that the player that finished first could choose who has initiative we rolled the Initiative (after both armies did have the same number of units I think it was alright so).

The first initiative goes to Chaos: 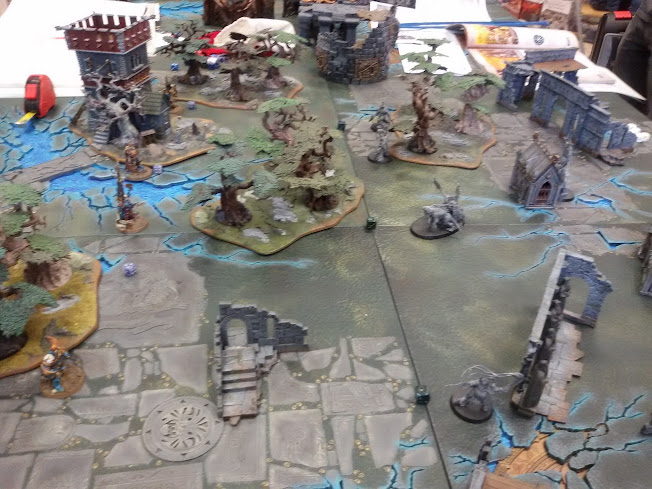 After my units were not near enough to the marker I didn't get any points that round. So it's still 3 : 0 for chaos 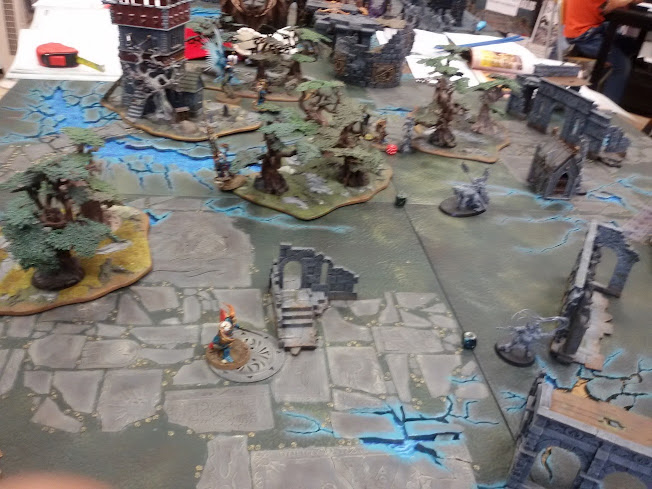 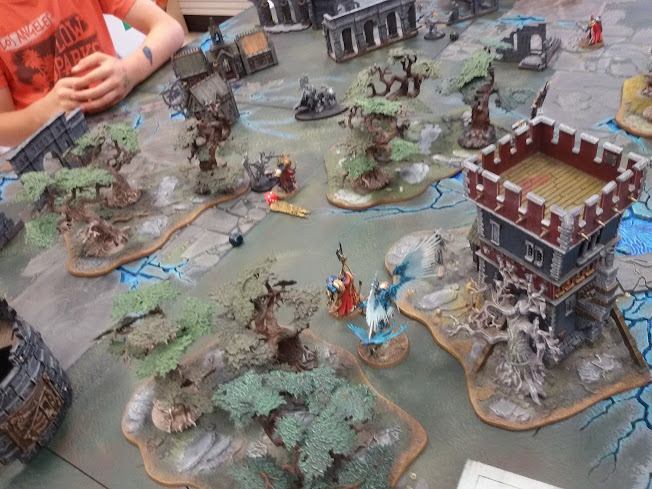 The Lord Castellant moved to the left marker to conquer it. The Lord Quetor moved closer to the Blood Stoker.

He shoots at the mighty lord, but failed to wound him.

The Lord Celestant generated another four hammers and damaed the Mighty Lord with them.

The Blood Stoker was able to make one damage to the Knight Questor.

After conquering the left marker the score was 3 : 1 for Chaos. 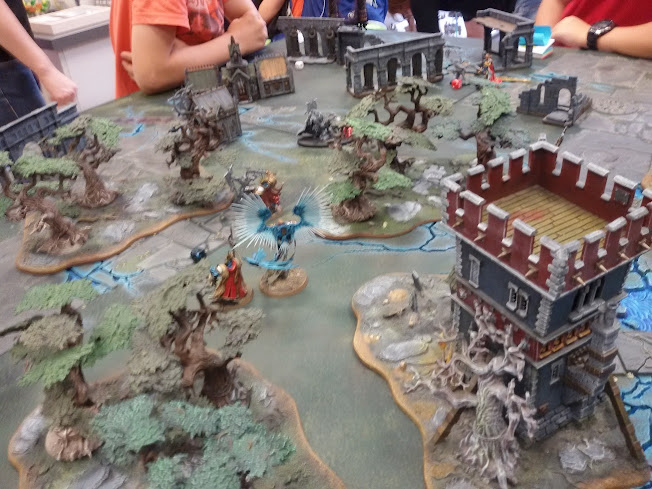 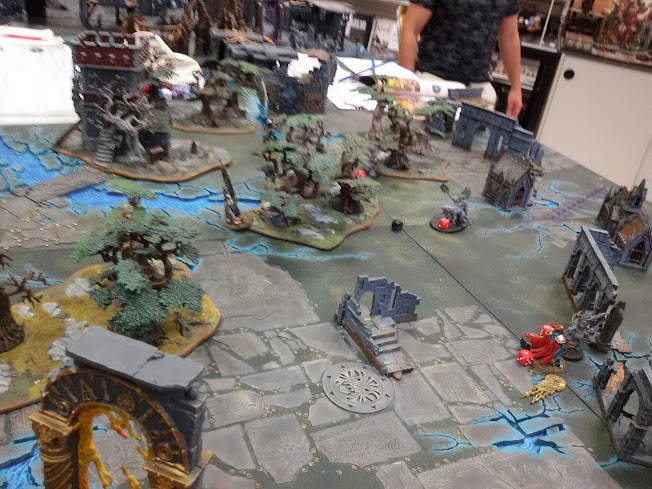 The Bloodsecrator used his portal of Skulls to for the Rage of Khorne Ability.

The Mighty Lord stayes at the marker to "corrupt" it further.

In the combat phase, the Lord Celestant makes 3 Damage to the Deathbringer, all other models fail to make damage.

The Bloodsecrator used his portal of Skulls to for the Rage of Khorne Ability. Blood Stoker Wipped the Mighty Lord of Khorne.

Mighty Lord of Khorne moved closer to the Knight Questor to charge him and makes 2 damage with his axe.

The Deathbringer makes 2 damage to the Lord Celestant but gets killed after this in return.

The ability of the Axe failed to kill the Knight Questor

The Blood Stoker generates another 3 points. So the score is 10 : 1 now.

The Lord Celestant moved to the middle marker, the Lord Castellant moved closer to the marker and the Knight Venator moves within 8" of the Bloodsecrator.

The Knight Venator tries to shoot at the Mighty Lord and sends its eagle to the Blood Stoker, but both fail.

The Knight Venator tries to charge the Bloodsecrator but failed with a 6.

In Combat Phase the Knight Questor killes at least the Blood Stoker and got controll to the right marker.

After the Lord Celestant and Lord Questor got control to the middle and right marker and generating 1 point each and the Lord Castellant still controlling the left marker generating 2 points it's still 10 : 5 for chaos.

Ini Roll for Round 4: Stormcast Eternals win (this is the last round)

Lord Celestant used Furious Retribution, Lord Castellant used this Warding Lantern for the Knight Venator. The Lord Relictor moved forward after he had nothing to do. The Knight Venator moved within 3,5" to the Bloodsecrator, shoots at him which makes 2 damage and charged him with a roll of 3.

While piling in he moved around the Bloodsecrator (because he only has to move closer to the closest model at the end of piling in, so he is in the 9" bubble of the Lord Celestant).

Neighter the Knight Venator nor the Bloodsecrator made damage in combat.

The Knight Questor and Lord Celestant generate another 2 Points by holding the marker and the Lord Castellant another 3. So this is the first time in the game that the Stormcasts have more points with 10 : 12 for Chaos. 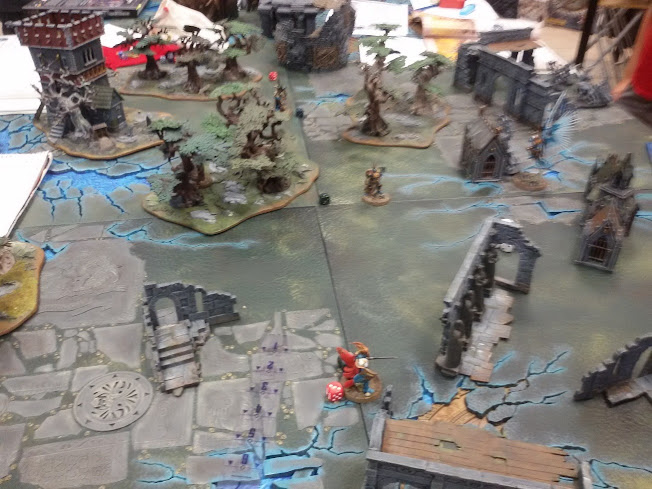 At this point the game ends after the Bloodsecrator is unable to make any points and is locked in combat.

So it was a win for the stormcast eternals at the end.

I know that a win against a veteran is more satisfying, but the game was fun and after I was 3 turns in the back that makes me sweat. If I hadn't slain the Deathbringer in chaos turn 3 or my Lord Questor would have slain during the game the game would have another ending.

Perhaps the Chaos Army would have more power by having a slaughterpriest, after he could create mortal wounds and would have pressurize my Stormcast Eternals perhaps more but I didn't made the list.

I don't know if the Mighty Lord should have attacked in turn 2 or generate 3 points by staying at the marker so I would have enough points in round 5 at best.