This follows almost immediately on the heels of Brother Teodoric, below. Reading that one first will help to illuminate what is happening here.

Emperor Teodoric's death did not mean the end of Austrasia per se, but it did mark the end of his line of warrior-kings. With the marauding soldiers of the Dark Gods sweeping towards the capital of Aix-la-Donau, his queen had a set of difficult decisions to make. There were not enough soldiers in all the realm to man the ramparts of the capital, and the very splendor and beauty of the city made it a tempting prize for the greedy soldiers. To stay would likely mean to die. To flee would mean that they were well and truly broken.

She fled all the same. In the years to come she would travel from castle to castle throughout the realm, fostering her children with various lords to strengthen their power and the family's chances of surviving now that their line was dispersed. The capital was sacked and burned to the ground, but the warriors of the Dark Gods were but men. Having taken their plunder, the horde largely dispersed, becoming more manageable bands of marauders. Austrasia held, but with Callisto aging and no clear leader among her children the realm faced another problem- succession. Fortunately, there was an answer in the Lex Teodoric, the corpus of law compiled by the old Emperor before his death.

He had proclaimed that in the absence of a clear heir the counts would vote upon the next holder of the Iron Crown. Thus was civil war averted and a new ruler chosen to lead the continuing fight against Austrasia's great enemy. Decades passed, and through good Emperors and bad the realm carried on, though it lost ground to the marauders with each passing year.  Almost two hundred years after Teodoric's death, Austrasia was only a fraction of it once had been, a small island of flickering light in a sea of darkness.

In the wake of the death of the old Empress there was to be a new election to decide on her successor- but almost from the beginning there was only one true winner. His name was Clovis, called Clovis the Wise, and he traveled from castle to castle speaking of a resurgence of power and a rebirth for the old kingdom. Many among the great and the powerful flocked to his banner, and many who might have doubted him were cowed. His appointment to the Throne was near-unanimous, and he was given the Iron Crown to great acclaim and adulation.

That night there was a feast. Almost all the lords and ladies of Austrasia attended to do homage to their new leader and to hear his plans for the future. All watched with rapt attention as he rose, pledging himself to bring them all glory, and oversee a changing of ways. As these last words left his lips, a hush fell across the room, and then the screams began as the flesh of the nobles and their retinues twisted and deformed.

Some tried to escape, and were cut down by flickering horrors manifesting from the walls.  Others saw what had happened and moved to attack the new Emperor- but with a wave of his hand and a burst of foul sorcery, these became nothing but mindless Spawn. Still others did him homage twice, and rose as his lieutenants and the minions of Tzeentch, the Silver Tyrant, the Feathered Serpent. That night Austrasia became the nucleus of a new Empire- one of Chaos and change, founded on betrayal.

Callie came of age cleaving to and cloven from her heritage. The ****** daughter of a nobleman, she grew up subsisting off of what she could forage out of his woods. Her mother had died when she was young, and it was some time before she learned enough to understand the significance of the one possession she'd been left- a bow, carved with the shape of a dragon at both ends and with runes forged into its surface.

By the time she was seventeen years of age, she was a wild beauty, athletic and cunning and wise in the ways of the woods. She idolized her father, and dreamed one day of coming into his household. She heard the news of the election of a new Emperor who promised to restore Austrasia to its former greatness, and wondered what this would mean for him- what it would mean for her. She watched her father leave to the Election feast with bated breath, apprehensive and excited about the future and perhaps her chance of claiming a place in his armies and his court during the great offensive against Chaos.

When he did not return for a week, she was curious. When he did not return for two, she was afraid. But when a man in skin-forged armor, glowing with painful green light returned, claiming to be him ascended, she was shocked and furious. She knew that Chaos was the great enemy, to whom no quarter could be given and no parley asked. To be betrayed like this... that night, after her tears of frustration had faded, she set out, scaling the walls of his keep in darkness.

She found him in his study, alone, looking through ancient texts of malefic magic. He did not look up when she entered through the window, but only spoke.

"I was expecting you, daughter. You have many questions. I will answer them for you... but shed your weapon. Do not be afraid. Let me love you."

In that moment a great part of her wanted to kneel to him, to accept the love she had always been denied- but then her eyes were opened, and she saw the betrayer he had always been. Drawing her bow, the runes grew warm to the touch and the dragons' eyes glowed- and when she loosed the arrow it screamed its vengeance aloud.

Her father fell, broken, and she realized a very great thing about herself and her weapon. The runes read "Callisto", and she had always thought that this meant herself- but now she realized it was the name of the great warrior queen, unmatched in archery. And if she could wield the bow as well... the blood of Iosephus Bogomil must flow through her veins. If what she feared was true, she was last of his line, his vengeance against his fallen descendants.

Callie fled, but not far. Clad in deep forest greens, she searched out each of the traitors who had survived Clovis' remaking of the Empire, hunting the fallen implacably- a dark angel of vengeance. No succor would they receive from the hands of their kinswoman, no terms would she offer or accept. Striking seemingly from nowhere, she cut and cut across Austrasia, destroying what she would and leaving the rest for the crows.

In the end only one enemy remained- the arch-traitor Clovis himself, the architect of betrayal, now crackling with the power of the Changer of Ways. Here was a foe that far outranked her in power, against which she had no chance of victory, let alone survival- and yet to accede to his rule would be the greater dishonor. On the eve of the final battle she clad herself in a pale bone funerary shroud, transforming into a winged avatar of death. Within the brightly lit and shifting patterns of Clovis' maze-like palace, this would be her best disguise. She slipped among the ruins of Teodoric's old capital, treading lightly and moving like a shadow, like a ghost on the wind. No mortal eye could have tracked her, and no mortal ear heard her approach.

Yet for all of this when she entered the sorcerer's throne room she was trapped- ensnared by a spell she could neither have anticipated nor evaded. Bowing like a courtier, Clovis welcomed her into his presence. He hailed her resourcefulness and her cunning, proclaiming her a worthy heir to Callisto just as he was a worthy heir to Teodoric before him. She need only bend her knee to the Changer and Clovis would make her his bride, to rule by his side forever. Otherwise, she would die- and he would become the last bearer of the blood of Bogomil, just as he had long planned. It was her decision which fate would come to pass.

But even as these words left his lips, he felt his sorcerous power suddenly falter- and what emerged from his arcane cage was not the woman he had entrapped, but a shining wraith. Her eyes blazed with malice, and the air around her was filled with a heavy presence, even as a multitude of voices screamed for vengeance and justice against Teodoric's traitor heir. When she spoke, her mortal voice was doubled and trebled by an undying chorus, and he was sorely afraid.

"You are no worthy heir of Teodoric, Clovis Kinslayer. I who knew him better than any know that he would never have bent the knee to the Bringers of Ruin as you have, and he is ashamed that you bear his blood. Let our line be broken. Let the name of Bogomil and the name of Austrasia and the name of Clovis be blotted from the record of the world, now and forever to come-- so say I, Callisto Ironflight, the Undefeated, the Seeking Shaft of God!"

At that she walked towards him, and where his sorcery met her spirit he had to give way, until she stood before him in her splendor untouched.

"Let this empire and this people meet their end at last- and let our names be erased forever."

At once her light leapt to envelop them both, and then the entire palace besides- and when it cleared away nothing remained in its wake but a shattered crown of iron. The immortal spirits of the Bogomils then returned to Nagash's realm, but Sigmar cradled her bruised soul in his mighty hands. As a father, he drew her up to Azyr, and there she rests and there she will serve beside him forever.

Sister Callie is called the Dark Angel, the Deathwing, the Voice of the Host, Heir to Callisto, Last of the Bogomils, the Seeking Shaft of God, the Iron Flight, the Eighth, the Faithful Daughter, the Blood of Queens. 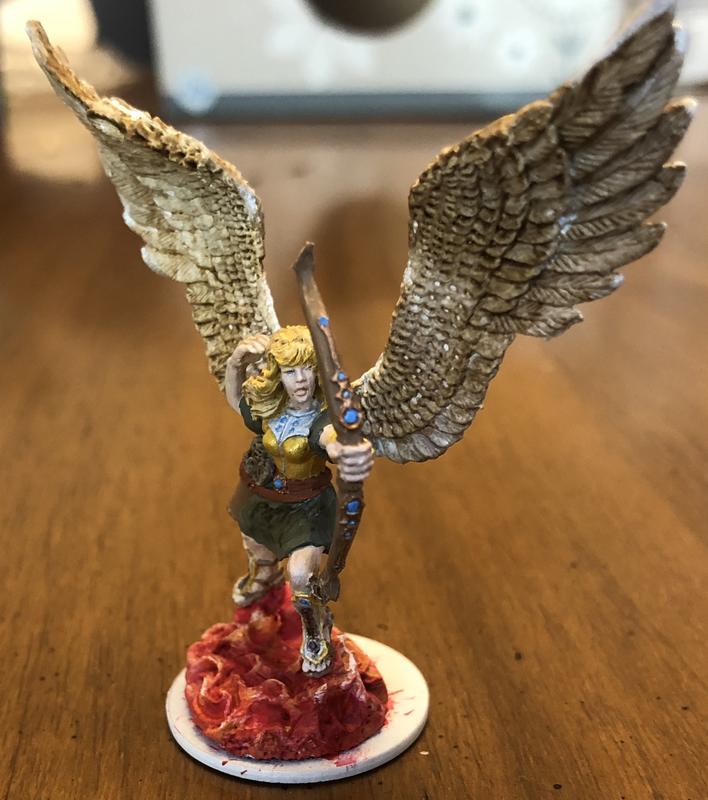